‘The Long Road’: 2 Marine veterans begin walk across America along Route 20 to raise awareness for MIAs Coleman "Rocky" KInzer, left, and Justin LeHew walk along Route 20 in Charlton, Mass. They are just starting out on a journey by foot along Route 20 from Boston to Oregon to raise awareness for U.S. service personnel killed overseas and considered missing in action. (Patrick Johnson, masslive.com/TNS)

CHARLTON, Mass. (Tribune News Service) — Just five days into their journey, Justin “J.D.” LeHew and Coleman “Rocky” Kinzer wanted to have a word with the guy who told them that Massachusetts was mostly flat.

The rolling hills west of Boston were a little too much and arrived too soon, but it’s good preparation for what is to come, LeHew said.

“It was a difficult first few days but today feels wonderful,” he said on Friday.

LeHew and Kinzer, retired Marine Corps sergeant majors with a combined 56 years of active duty, expect to spend the next six months walking — yes, walking — across the country.

They plan to walk along Route 20 from Boston to Newport, Ore., a distance of 3,365 miles over 12 states. Route 20 is the longest single road in the U.S. highway system, and state legislatures across the country, including the Bay State, are taking action to designate it the Medal of Honor Highway.

LeHew and Kinzer are making their way through Western Massachusetts today. If they average 20 miles a day, they should reach their destination by the end of November.

The first four days were rough, according to LeHew. Rough on the legs. And, rough in other ways, too.

“We had a ‘Masshole’ moment in Auburn,” he explained.

A narrowing of the road, a tight curve, and traffic not prepared for two guys hiking on the shoulder led to a dicey moment or two, LeHew said. Horns honked. Brakes squealed. A hand gesture or two may have been displayed.

Kinzer said, with a perfect deadpan, “I do apologize to anyone we may have inconvenienced on the road.”

The point of the walk, dubbed “The Long Road,” is to raise funds for History Flight, a nonprofit dedicated to identifying the remains of U.S. military personnel killed overseas and then arranging their transportation home for a proper burial.

LeHew, 52, of Fredericksburg, Va., is the chief operating officer for History Flight. Kinzer, 44, of Kailua, Hawaii, is an assistant operations manager and team leader for Life Flight missions.

Since 2003, History Flight has helped recover, identify and return the remains of more than 160 service members killed in wars in Europe and the Pacific. It has also helped recover an additional 350 sets of remains that await identification by the federal Defense POW/MIA Accounting Agency (DPAA).

While taking a break on the roadside in Charlton, LeHew checked his email to find the accounting agency had confirmed the identity of a 27-year-old Marine gunnery sergeant from Montana killed in action on Nov. 23, 1943, on the south Pacific island of Betio in Tarawa Atoll of the Gilbert Islands. The remains were found by History Flight in 2009.

“Most people have no idea there are 81,000 U.S. service members missing in action since World War II,” he said.

“The Long Road” hopes to call attention to the work of History Flight but also the sacrifice of thousands of service personnel and their families.

Every community has a war memorial with names of the fallen. Each name represents a real person lost in war, the two remarked.

“You have a town with a 300 population, and there are five names on the memorial. That’s a huge sacrifice,” Kinzer said.

Their journey began from the USS Constitution in Charlestown on June 6, the 78th anniversary of the Allies’ D-Day invasion of France during World War II .

The time and place were significant.

The Constitution is the oldest commissioned Navy vessel, and Marines are a part of the Navy. 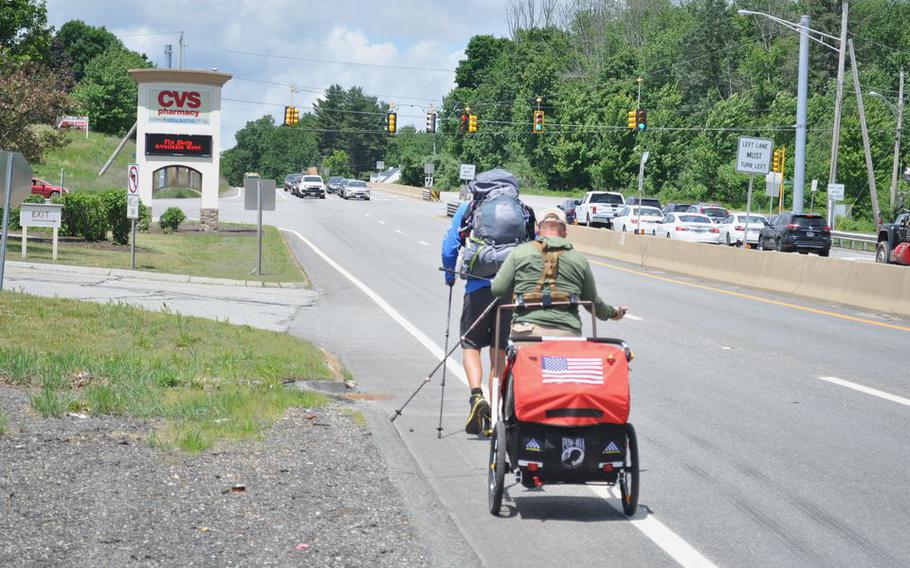 Justin Lehew and Coleman Kinzer are just starting out on a journey by foot along Route 20 from Boston to Oregon to raise awareness for U.S. service personnel killed overseas and considered missing in action. (Patrick Johnson, masslive.com/TNS)

“We were going to set out on Memorial Day, but I didn’t want to take anything away from that,” LeHew said. Memorial Day should be about remembering people’s service and sacrifice, he said, and not about two guys setting out on an improbable cross-country journey.

Kinzer carries a heavy pack on his back. LeHew, who earned the Navy Cross for heroism in Iraq in 2003, is harnessed into a modified bicycle trailer loaded with hundreds of pounds of gear that he pulls behind him.

“This is it. This is what we carry,” LeHew said.

While it took some time to get used to hauling the rig, going up hills is actually easier than going down, he said. On declines, gravity takes over and it feels as if the rig wants to bowl him over, LeHew explained.

Kinzer, 44, said the first four days were difficult, mostly because for all the preparation he put into it, there’s really no way to prepare for a 3,365-mile hike.

“The first week is just to remind your body how to march under load,” he said. “I was in the infantry. We do a whole lot of things under load. My body is starting to remember what that means.”

Still, Kinzer said he’s looking forward to the plains of Nebraska and Iowa before they have to tackle the Rocky Mountains, where parts of their route rise to 9,000 feet above sea level.

Being away from his family is difficult, but he’s been through it before. His wife and daughter endured extended periods of time without him while he was on active duty with the Marines.

Looking forward to November, Kinzer said “I imagine that when we reach Newport, I’ll go see the Pacific (Ocean), and then find a ride to the airport to go back home.”

The idea for “The Long Road” originated a few years ago, according to LeHew. They planned to do it in 2020 but COVID-19 delayed things.

A few months ago, the time seemed right with an overlapping “window of opportunity” between work and the weather, so they went for it.

“We might as well do it while we’re young,” LeHew said.

Before History Flight, LeHew and Kinzer served together in the 3rd Marine Regiment.

LeHew said that when one Marine proposes something crazy to another Marine, the proper response is to agree. He recalled how Kinzer, without hesitation, said, “Let’s do this.”

They’ve been keeping a daily account of their journey on a Facebook page, titled The Long Road.

While the page was set up almost as an afterthought, it’s turning out to be quite valuable. Their Facebook followers who live along Route 20 are reaching out, offering food, shelter and any other assistance they can give.

LeHew is keeping track and looking to tap into that base of support throughout the journey. His wife, back home in Virginia, is working as an advance scout. Each day she calls police departments for communities on itinerary to let them know they are coming.

Police have been pretty receptive, and officers have come by to ask if they are OK and to recommend where they could bed down for the night, according to the pair.

“People have been more than hospitable already,” Kinzer said.

On Friday, when The Republican caught up with LeHew and Kinzer, they were resting on the tailgate of Nick Treadwell’s pickup truck by the side of the road in Charlton.

Treadwell, of Spencer, a former Marine tank mechanic, had been following their exploits on Facebook. When he saw they were approaching his neck of the woods, he loaded up some bottles of Gatorade and set out to find them.

When he spotted them, he pulled over and invited them to rest for a bit. Seven miles into their daily walk with another 11 to go before they were to bed down at the Village Green Family Campground in Brimfield, they accepted.

Treadwell said it was the least he could do.

“I follow a bunch of Marine groups on Facebook. I saw that they were in Auburn so I started doing laps (on Route 20 between Auburn and Sturbridge),” he said.

There’s yet to be much media coverage, according to LeHew, but they’ve garnered a devoted following on Facebook. People who live in the vicinity of Route 20 in several states have already reached out to offer assistance, to recommend where they could stay or grab a meal, or just to cheer them on.

He said he keeps track of everyone who makes an offer because they may need to take people up on it when the time draws near.

The generosity and hospitality shown by the people they’ve met so far make up for the weary muscles, according to LeHew. Meeting people face-to-face at ground level is reassuring, he said.

“When you get out here and meet people, you realize America is still a pretty good place,” LeHew said.

Later in the day, when they arrived at the campground in Brimfield and explained their journey, they received a $100 donation from the owner, who hooked them up with a campsite and fire wood for the night. “Great Americans everywhere. (Semper Fi),” read their Facebook post.