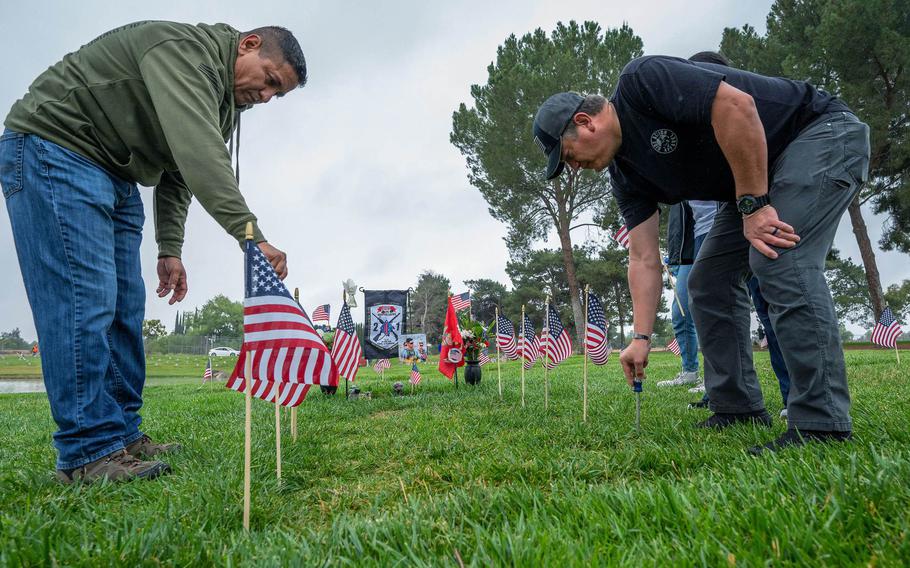 From left, Rene Santos helps Herman Lopez place flags around U.S. Marine Corps Cpl. Hunter Lopez’s grave as they volunteer with hundreds of others to place 250,000 flags at Riverside National Cemetery for Monday’s observance of Memorial Day in Riverside on Saturday, May 28, 2022. (Terry Pierson, The Press-Enterprise/SCNG/TNS)

(Tribune News Service) — On a recent foggy morning, Cheryl Rex drove from the foothills of Rancho Cucamonga to Long Beach, Calif., to spend some quiet time thinking about her son.

At Rosie the Riveter Park, she walked over to a nearly 90-foot memorial that stretches along a wall shaded by trees, created by Honoring Our Fallen. Ahead of Memorial Day, the names of 11 Marines, a Navy sailor and an Army soldier were added to the wall — three natives of Southern California and most members of the 2nd Battalion, 1st Marines at Camp Pendleton.

They all died on Aug. 26 while standing guard when Afghanistan’s Kabul airport was bombed during the evacuation of Americans and Afghan allies.

On this first Memorial Day after their deaths, the 13 service members are being honored in communities across Southern California. Their names will be read aloud today in ceremonies from Long Beach to San Clemente and Riverside to Palm Springs.

They will be remembered as the newest among the tens of thousands of local service members who have paid the ultimate price to defend America’s freedoms.

At the Honoring Our Fallen memorial, Rex took out rice paper and carefully used a charcoal pencil to trace the letters of her son’s name: Lance Cpl. Dylan Merola.

Memorial Day has always landed on or near her birthday. This year she will attend a commemoration in Rancho Cucamonga and then drive to Covina Hills to have lunch with some of her family and Marines who served with her 20-year-old son at his final resting place in Forest Lawn.

On past Memorial Days, Rex and her three children — Merola was the middle child — and her parents and siblings would spend the weekend doing something outdoors like camping or fishing.

“We always took a moment to realize that freedom wasn’t free,” she said. “And we understood the reason we had that moment together was that other people were fighting for our freedom.”

She understands that more than ever now. This Memorial Day has given a whole new meaning to “freedom isn’t free.”

The Marines killed were part of a special crisis response force that had already spent six months in the Middle East, before the unit was called to provide security and help State Department officials process the onslaught of people at the gates of the Hamid Karzai International Airport as the United States completed its withdrawal from Afghanistan.

The attack, which also killed 170 Afghans and wounded another 45 U.S. troops, was the deadliest against U.S. forces in Afghanistan since Aug. 6, 2011.

“They were supposed to be coming home,” Rex said, “but then I got a phone call from my son saying they were leaving Jordan to help in Afghanistan with evacuations.”

Rex said her son and the others all wanted to be there.

“They almost felt honored to help,” she said. “They wanted to help the women and men and save the babies. They were giving other people a chance and they were excited. This is what Marines train for.”

Herman Lopez, a chief deputy in the Riverside County Sheriff’s Department, and his wife, Alicia Lopez, a deputy in the department, know their son, Cpl. Hunter Lopez, 22, and his fellow Marines were well trained when they took their posts that day outside the airport’s gate.

“I have no doubt if this was a situation where they came into a firefight and a tactical situation, Hunter and the Marines would have had the advantage,” Herman Lopez said.

Hunter Lopez joined the Marines because he wanted to follow his parent’s path into law enforcement. Always preparing for his next move, he saved up some of his leave so he could exit the Marines earlier and start the process of joining the Riverside Sheriff’s Department. His Marine contract would have been up this September.

Grieving their loss this Memorial Day, the Indio couple remember last May when they supported their son in honoring his fallen friend.

Hunter Lopez was close friends with Cpl. Cesar Villanueva, 21, of Riverside, one of nine servicemen who died on July 30, 2020, when the amphibious assault vehicle they rode in sank during a training exercise off San Clemente Island.

Lopez’s parents raised a flag at their home in Villanueva’s honor, Herman Lopez sending his son a photo and telling him that he was thinking of him and his friends.

Hunter Lopez, who trained and deployed with Villanueva, or “Villa,” wore a bracelet commemorating his lost friend. His parents received the bracelet with his belongings after he was killed.

“They’re trained and know it can happen, but when it actually happens, it’s different,” Herman Lopez said, recalling how hard Villanueva’s death hit his son.

Now Memorial Day is “about the loss of Hunter and remembering him. It’s taken a whole new meaning now,” Alicia Lopez said.

“We know there are 12 other moms, dads and siblings that are suffering as we are,” she said. “I can’t help but think of them and that they’re sharing the same pain.”

On Saturday, the couple attended a remembrance and placed flags on the graves at the Riverside National Cemetery, where Hunter Lopez is buried. Today, they also will attend several other ceremonies and then visit their son’s grave later that afternoon.

“It would be easier to stay home, but it’s not what Hunter would have wanted,” Herman Lopez said.

What gives the couple some solace is they were told that just minutes before their son was killed, he and another Marine had jumped into a canal to save two girls being crushed by the masses trying to push toward the gate.

“His friend who was with him said they were able to get the girls to safety,” Herman Lopez said. “Then he said Hunter was going back (into the crowds), and that was the last time he saw him.”

“In our line of work, you see all kinds of tragedies,” the senior Lopez added. “If you don’t see it firsthand, you hear about it. He was living his dream of being a Marine, helping others, and being so respected by his fellow Marines.

“I could never say it doesn’t hurt, but instead of me being Hunter’s hero, he is my hero. He did in his 22 years what others did in a lifetime.”

Steve Nikoui, father of Lance Cpl. Karem Nikoui, said he won’t be comfortable spending Memorial Day in public. Instead, he will sit in his Norco home’s master bedroom that overlooks the hillside where his son would hike and work out in training to join the Marines.

For him, the day is bittersweet — there’s despair over the loss of his son, but also a thankfulness, he said.

“In looking back and what God has done for me, he was always home,” Nikoui said, recalling that every weekend his son, who was 20, would bring about 15 other Marines to the family home. He would shoot videos of his buddies goofing off, eating steaks and having fun. The only time Nikoui said his son wasn’t there was when he deployed.

The father and son texted and spoke constantly and when his son was in Afghanistan at the airport, Nikoui said he took joy knowing his son told his Marine buddies that “they were doing God’s work.”

“He gave his life to Jesus Christ at Harvest Festival in Anaheim with Pastor Greg Laurie on Aug. 26, 2016,” Nikoui said. “He lost his life five years later to the day. I’m so thankful he had Jesus Christ because where would I be now if I didn’t have that?

“It was Christ that gave me every moment I could have possibly had,” Steve Nikoui said. “I don’t have to live from the day he died to when I die thinking, ‘Could I have been a better dad?’ Every moment was valued, there was nothing wasted.”

For Rex, she’s been preparing Merola’s grave for Memorial Day. On Friday, she placed red, white and blue flowers and American flags around his headstone.

That’s where she’ll be today with her family and Merola’s Marine brothers.

Those Marines have been by her side since they returned from deployment, she said. They come over each weekend and they visit Merola, she said, where they sit and talk with him and leave him mementos.

“Every day, there are new coins,” she said. A quarter means the Marine was with him when he died, a dime means they served together.

“Even though I don’t know everyone who spends time with him, it shows me that it’s not just Marines, but many civilians pay their respects to Dylan,” she said. “Seeing the amount of change with him shows me Dylan touched so many hearts.

“They were in Afghanistan saving lives and I believe the world saw our Marines helping others to freedom,” she added. “Freedom isn’t free.”