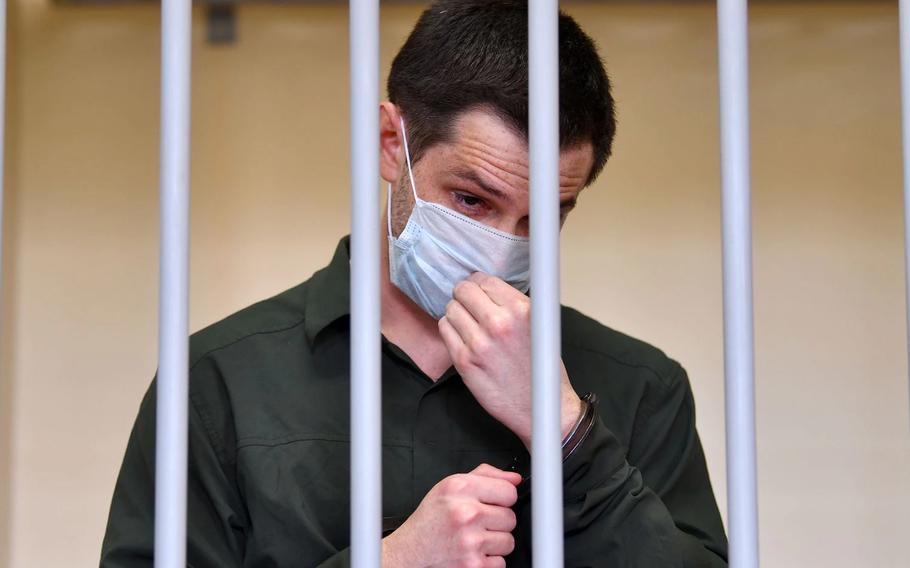 (Tribune News Service) — On Monday, Marine veteran Trevor Reed's family spoke with him for the first time in over 200 days.

Reed, a Fort Worth native who is imprisoned in Russia, sounded tired and hopeless, his sister and parents said Tuesday as they waited outside the Tarrant County Resource Connection building in hopes of getting the attention of President Joe Biden.

During the president's visit to North Texas to speak about issues affecting veterans, the family wanted to urge Biden to consider trading Russian prisoners in the U.S. for the release of Trevor Reed and other Americans.

Biden apologized for not being able to stop because of his Secret Service security team, but he called the family and could be heard over the phone saying he feels for them and "can't imagine what you all are going through." The White House also told the family that although Biden wouldn't be able to meet with them Tuesday, they would schedule a meeting in the near future, said Trevor's mother, Paula Reed.

In the phone call, Biden "said he said a Rosary for Trevor today on the way here and he was just very, very apologetic that he couldn't meet with us ..." Paula Reed said. "He wanted to let us know that Trevor is something he thinks about every day, so obviously better words could not be heard by a mother whose son is there. He said he understands that Trevor's health is very critical and he wants to do whatever he can do to bring him home as soon as possible."

As the president's motorcade passed by Tuesday afternoon, Biden nodded and pointed at Paula Reed, she said.

"They drove by faster than I thought he would. But Biden gave me a nod and pointed at me, so he acknowledged us, and I feel great," Paula Reed said.

"I feel he saw me, so that made it worth it, standing in the cold," she said. "We wanted to get his attention, and I think we did that."

Trevor's father, Joey Reed, said the family is excited to have confirmation that Biden plans to meet with them.

"We'll come to you anytime, anywhere," he said to Biden on the phone call.

"(Jen) Psaki, the press secretary, stated on Air Force One that they were planning on scheduling a meeting with us and the president," Joey Reed said. "So we're happy about that."

According to notes from the press briefing on the White House website, Psaki told reporters on Air Force One that "we are working toward setting up a meeting with his family. The president's looking forward to doing that."

Trevor's family says Russian officials fabricated charges against him to use him as a bargaining chip with the U.S. government. Russian police accused Trevor of assaulting an officer in August 2019, a week before he was supposed to return to Texas after visiting Russia.

At his trial in 2020, Trevor, 30, was sentenced to nine years in prison. He's being held in a prison camp in Mordovia, which is about 350 miles from Moscow. The investigation and trial, marred by inconsistent statements from Moscow police and the involvement of the FSB, the Russian equivalent of the CIA, have been discredited by U.S. officials.

"It's been two and a half years," Trevor's sister, Taylor Reed, said Tuesday before Biden arrived. "We were hoping that he would be home before all of this with Ukraine escalated. And now that it has, it's becoming less and less likely that I'm ever going to see my brother again."

"We'd really like the president to change [this]. He's the only one who can," she said, crying. "We're trying. It's the only thing we can do at this point is to wake up and try. But it's exhausting."

The family arrived Tuesday morning in a parking lot near where Biden planned to speak. Waiting in the cold, with occasional rain and wind, they said they would keep waiting for hours if necessary.

"(Biden) is going to come to Fort Worth and speak at the hospital Trevor was treated at ... about how we should care about our veterans," Taylor Reed said. "He should put his money where his mouth is and do something for these veterans who've done nothing wrong and are wasting their lives in a Russian jail."

Paula Reed wore a shirt with a photo of her son on it. The family had signs and banners and Trevor's picture on the side of their two vehicles, with the phrase "Free Trevor Reed," and an explanation that he's been wrongfully imprisoned in Russia since 2019.

"[A prisoner trade] could be done in 24 hours," Joey Reed said. "I mean I've heard, you know, they've got to do a pardon or they've got to do this or whatever, but if the president of the United States says do it, it's one of those things where he still has kingly powers."

During the Obama administration, Trevor Reed served as a Marine security guard at Camp David. He recently contracted tuberculosis and has been coughing up blood after being denied medicine, his family said. He also spent time in solitary confinement after he refused to perform hard labor, they said.

"Our son would have given his life for you and they (the Russians) want to trade. ... If that's what they want, you need to do that before our son dies of tuberculosis," Joey Reed said. "He was willing to die for you. The least you could do is trade a drug dealer who's already been here for 10 years and is going to be home and out before Trevor. That's a few things I would tell Biden."

On the phone this week, the family spoke with Trevor about the worsening conditions following Russia's invasion of Ukraine.

"Access to information is very skewed in jail to begin with," Taylor Reed said. "But it's especially skewed due to the censorship that happens in Russia. So many (prisoners) mostly exchange notes on what the Russian people are being told is happening in Ukraine and what we're hearing here."

"[Trevor] pretty much knows that everything there is a lie," she said. "He's always very interested to hear what the outside media says. But he's mostly focused on trying to stay alive at this point. He's barely given any food. The food that he's given is like, they've got cats in the jail in Russia that will literally not eat the food that he's being given to eat."

"[Speaking with him] was obviously a pleasant surprise to get a call to know that he's OK," Taylor said. "After 232 days not hearing from him at all. But it was also really rough. He's extremely discouraged. He's super sad. He feels left behind. He feels forgotten."

Ahead of the president's visit on Tuesday, U.S. Sen. John Cornyn, R-Texas, called on Biden to meet with Reed's family.

"Trevor Reed has been held in a Russian prison with little to no access to badly-needed health care or communication with his family, and his situation is only going to get worse given the political climate in Russia," Cornyn said in a statement. "This Administration must do more to free Americans held hostage in Russia. President Biden meeting with the Reed family while in Texas on a day he is touting the importance of caring for our veterans would be a welcome start."