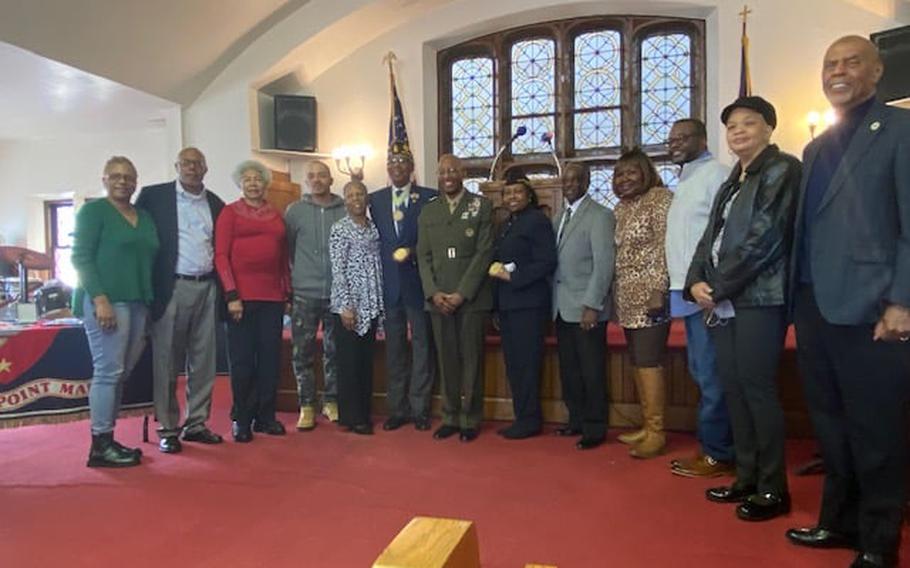 On Feb. 26, 2022, Congressional Gold Medals were awarded to the niece and nephew of Montford Point Marine brothers Timerlate and Alfonzia Kirven. In addition, both families were awarded World War II medals, earned and not received. Also, a Purple Heart was awarded to the family of Timerlate Kirven for injuries sustained in battle on the Island of Saipan in June 1944. (Montford Point Marines Chapter 10/Facebook)

Uncle Al worked for the Pennsylvania Railroad and then Amtrak, and Uncle Tim was a cook at Bookbinder’s in Old City and a Methodist minister.

But Fuller, 77, gradually learned of a significant historical backdrop to the steady lives her uncles had in Philadelphia in the decades after World War II. Alfonzia and Timerlate were Montford Point Marines, the first African Americans allowed in that branch of the U.S. military, starting in 1942.

For close to a decade, Fuller has been working to get her uncles officially recognized as Montford Pointers — named for the segregated and substandard North Carolina boot camp where they trained. In 2012 the group collectively received the Congressional Gold Medal for their groundbreaking service. The medal is, along with the Presidential Medal of Freedom, the country’s highest civilian honor for distinguished achievement.

Posthumous recognition for the Kirven brothers came Saturday during a ceremony at Calvary Gospel Chapel in West Philadelphia. Fuller and her cousin Albert W. Newman received replicas on behalf of their uncles, who were born in South Carolina. Timerlate died in 1985, Alfonzia in 1997.

Fuller said she persisted in getting the recognition to influence younger generations of her family.

Fuller also received a Purple Heart on behalf of Timerlate, who was wounded during the Battle of Saipan in 1944, when Japanese artillery hit the compound where he was working as a cook. Alfonzia served in the police during the war, according to his honorable discharge document, but it’s not clear where.

The awards came through the Montford Point Marine Association, which was founded in 1965 in Philadelphia but is now based in Mobile, Ala. One of the goals of the association is to find living Montford Pointers or families of deceased members of the group to bestow the honor.

Close to 20,000 men went through Montford Point from 1942 to 1949, when it was decommissioned, said Joe Geeter, president of the association’s Philadelphia chapter. “We’ve only awarded about 2,000 of them” nationwide, Geeter said.

One of the two Montford Point Marines in attendance, Carroll Braxton, who retired as a master gunnery sergeant after 28 years, called the ceremony beautiful. Braxton, 97, who lives in Manassas, Va., said he was one of the first Black drill instructors in the Marines.

Fuller grew up with a photo of Staff Sgt. Timerlate Kirven and Cpl. Samuel J. Love Sr. after they received Purple Hearts for being wounded on Saipan. That photo is in the National Archives and can be bought on Amazon for $64.99.

For years as an adult, Fuller was accustomed to hearing her pastor at Calvary Gospel Chapel, Joseph Ginyard, often talk about his experiences as a Montford Point Marine. Cecil B. Moore, who became a lawyer, civil rights activist, and member of Philadelphia City Council, was his drill sergeant.

In the mid-1990s, Alfonzia went to Calvary Gospel, at 4121 W. Girard Ave., for the funeral of Fuller’s father. Alfonzia told Fuller he knew Ginyard, who died in 2014, in Hawaii.

When Fuller was helping clean out Alfonzia’s house after his death, she found his military suit, which looked new. She said she didn’t understand the significance of the Montford Point Marines at the time, but she thought: “If this suit meant that much to him, I’m going to keep it.”

The pieces came together in 2012 when the Montford Point Marines collectively received the Congressional Gold Medal in Washington, with more than 400 Marines in attendance. Ginyard had enlisted Fuller’s help when he organized a local ceremony for those who could not travel to Washington.

That experience put Fuller, who has lived her whole life in West Philadelphia and worked as an adjudicator at the Social Security Administration and then as a clerk in the Philadelphia District Attorney’s Office, on the path toward getting the medals for her uncles, hesitating at times for fear that another relative might want to receive the honors on behalf of the brothers.

About a dozen family members attended Saturday’s event, which drew about 40 people total.

Alfonzia and Timerlate were great-uncles to Anwar Magras, 40, who is in the Army National Guard and said he expects to be deployed overseas in June. Magras remembered spending lots of time at Alfonzia’s house, near North 54th Street and Girard Avenue.

“I feel great,” Magras said after the ceremony. “For myself currently serving in the military also, to have him acknowledged and recognized, I think it’s a beautiful experience. I couldn’t miss it for the world.”