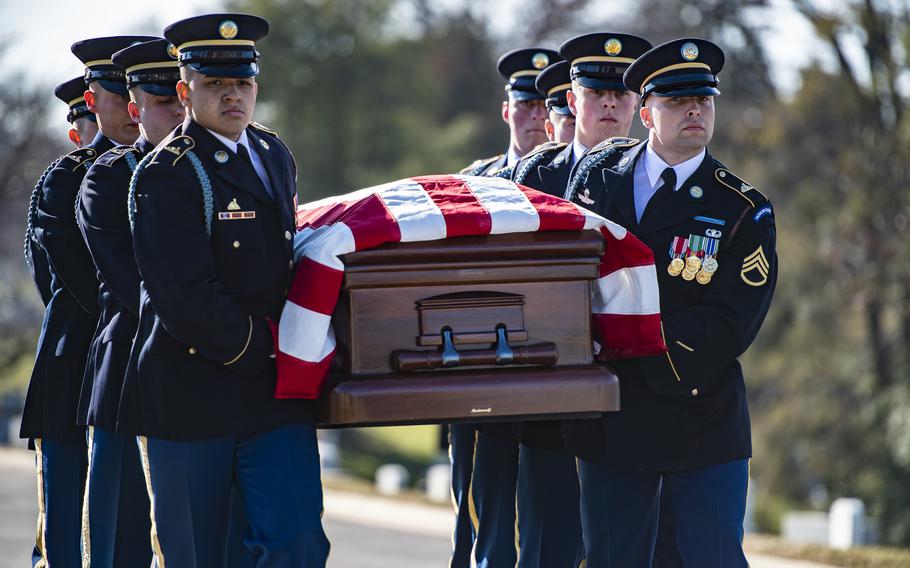 The small ceremony — the family requested permission for 120 people in the chapel — was the final in a series of events honoring Kansas’ most famous politician.

“No place in Arlington National Cemetery can be purchased,” said Maj. Mary O’Malley, who worked for Dole. “It must be earned.”

Dole earned his place at Arlington by serving in World War II as a member of the U.S. Army’s 10th Mountain Division.

He was shot in the right shoulder while his regiment was attempting to take a hill in Italy, shattering a vertebrae in his neck and nearly leaving him paralyzed. He came home in a full body cast and never regained control of his right arm.

He came back from the injury — with help from his home town of Russell — and went on to serve in the U.S House of Representatives from 1961 to 1969 and the U.S. Senate from 1969 to 1996. He was Majority Leader when he abruptly resigned to run for President after winning the Republican nomination. 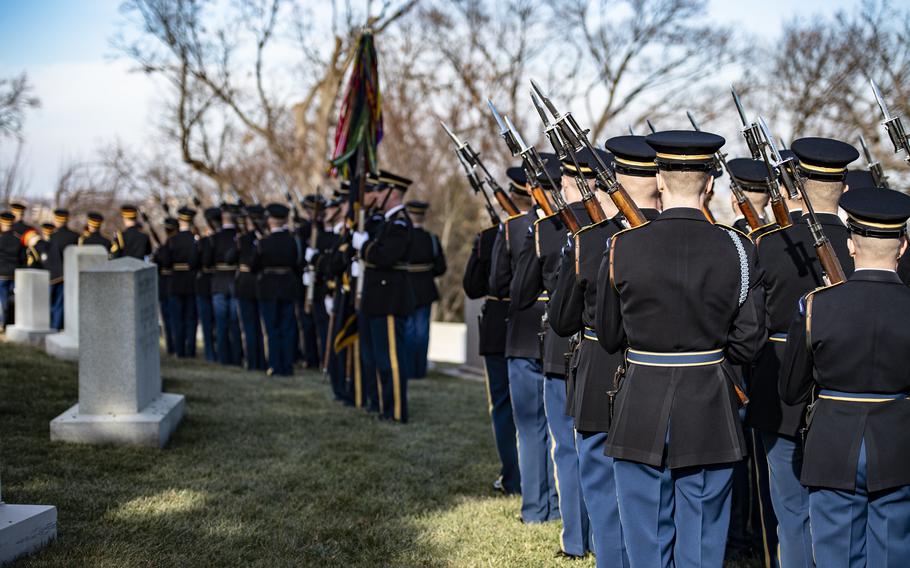 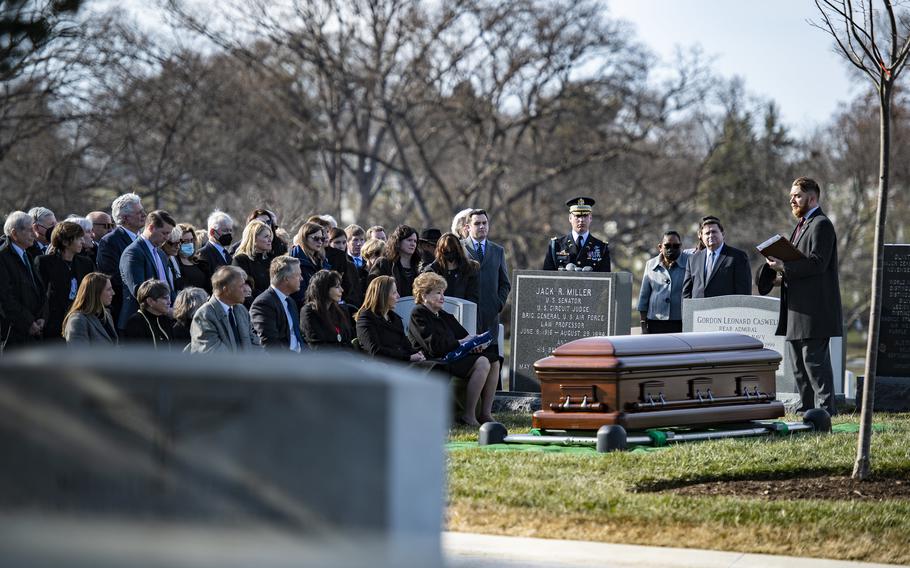 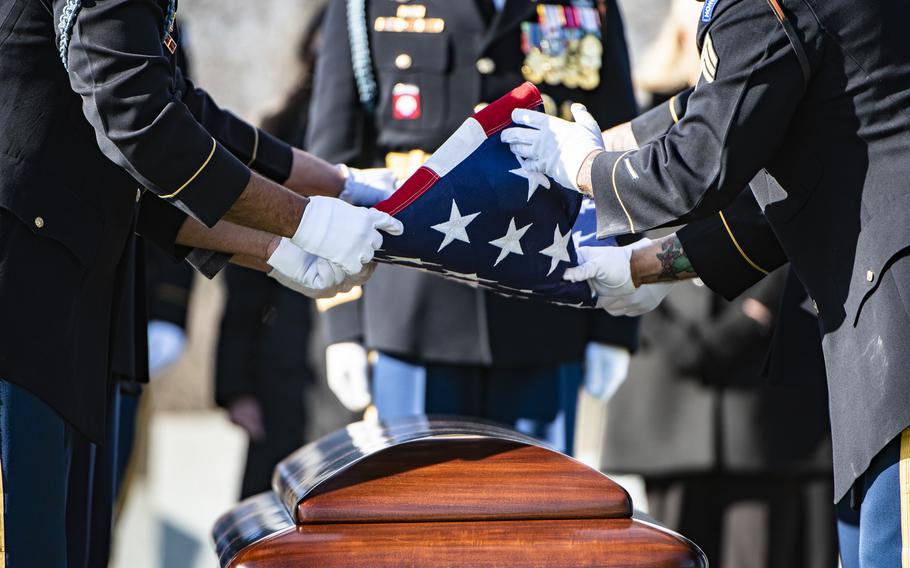 Members of a U.S. Army honor guard fold the American flag above the casket of former Sen. Bob Dole who was buried at Arlington National Cemetery on Feb. 2, 2022. (Elizabeth Fraser/U.S. Army) 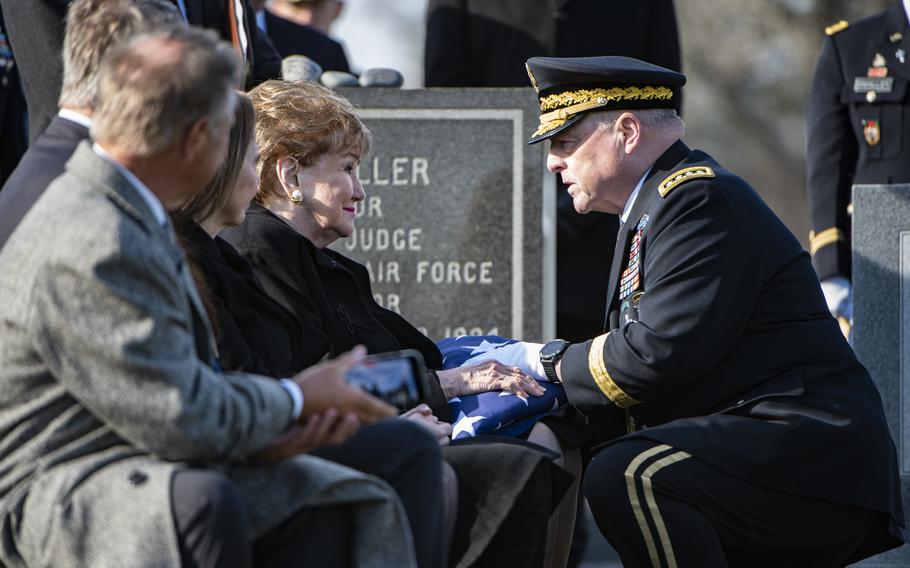 After a small, private ceremony, a drummer tapped a snare drum as Dole’s casket was pulled to his grave site in a caisson — a Civil War-era wagon pulled by a U.S. Army team of 6 horses — and was escorted by an Army band, flag team and two marching platoons.

He was followed by a crowd that included his family, friends former staffers and politicians including Kansas Senators Roger Marshall and Jerry Moran and Kansas Gov. Laura Kelly.

After a brief grave site prayer, seven soldiers fired a three-round volley and a bugler played taps, the sound rising slowly from lower on the hill.

The band played America the Beautiful as the casket team folded his flag and General Mark Milley, the chairman of the Joint Chiefs of Staff, went down on one knee to hand it to former Sen. Elizabeth Dole.

Dole’s headstone will go in section 4 of the cemetery at grave 3-A. Along with the Capitol, there is a view of the Washington Monument, not far from the World War II memorial Dole helped get built.