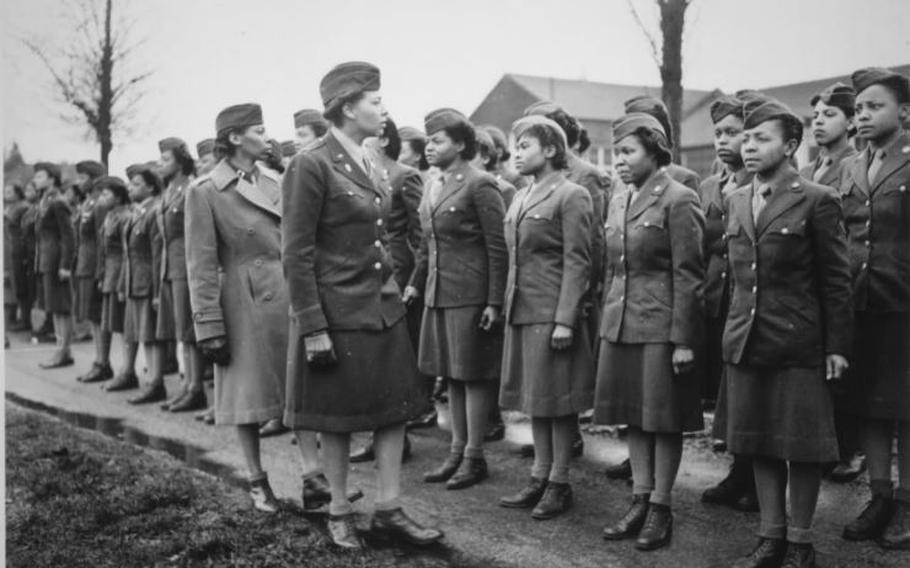 First group of Black members of the Women’s Army Corps assigned to serve overseas in 1945. The story of the 6888th Central Postal Directory Battalion is featured in the documentary “The Six Triple Eight,” being screened online by the Foundation for Women Warriors on Feb. 2, 2021. (U.S. Department of Defense/National Archives)

(Tribune News Service) — The women of the 6888th Central Postal Directory Battalion of the U.S. Army arrived in Europe in February of 1945 to warehouses piled to the ceilings with letters and packages. There was no heat, the windows were blacked out, and rats went after packages that contained spoiled cakes and cookies, according to the U.S. Army Center of Military History.

They were there to sort through millions of pieces of mail that were stalled and not making it to the intended service members, so the 855 women were divided into three, eight-hour shifts and worked seven days a week to fix the Army’s backlogged mail system. They cleared the six-month backlog in England in half that time, and another three-year backlog in France that May.

A lot of people are still unfamiliar with their work and how this all-Black female battalion served their country during World War II, but the Foundation for Women Warriors is hosting a free, online screening of “The Six Triple Eight,” a documentary about the unit, using its nickname. The film starts at 6:30 p.m. Wednesday at foundationforwomenwarriors.org.

Jodie Grenier is CEO of the Foundation for Women Warriors, a nonprofit providing support and resources to female veterans and their families. She talked about the film, the racism and misogyny the battalion faced, and the work being done to honor them with the Congressional Gold Medal.

Q: Were you previously familiar with the story of the “Six Triple Eight” before this film?

A: I’m embarrassed to say that I just learned about these women about 2½ years ago, and that is a sentiment that I share with many women who are veterans — a lot of times, women’s military history is just unknown or untold. Part of our mission is our tagline: “Honor Her Service and Power Her Future.” We really believe we can’t empower the next generation if we don’t tell the stories of past generations because we stand on their shoulders. I’ve just learned about them in the past couple of years, so I’m eager to share their story and the stories of so many other groups of women who served their country.

Q: What was your initial reaction to learning about the 6888th?

A: It was a moment of reflection of really seeing how much these women overcame and how many challenges they were faced with. It was also a moment of inspiration, and I would also say, a bit of frustration that I didn’t know about them. I think all of those gave the impetus to ensure that we’re continuing to share their story. 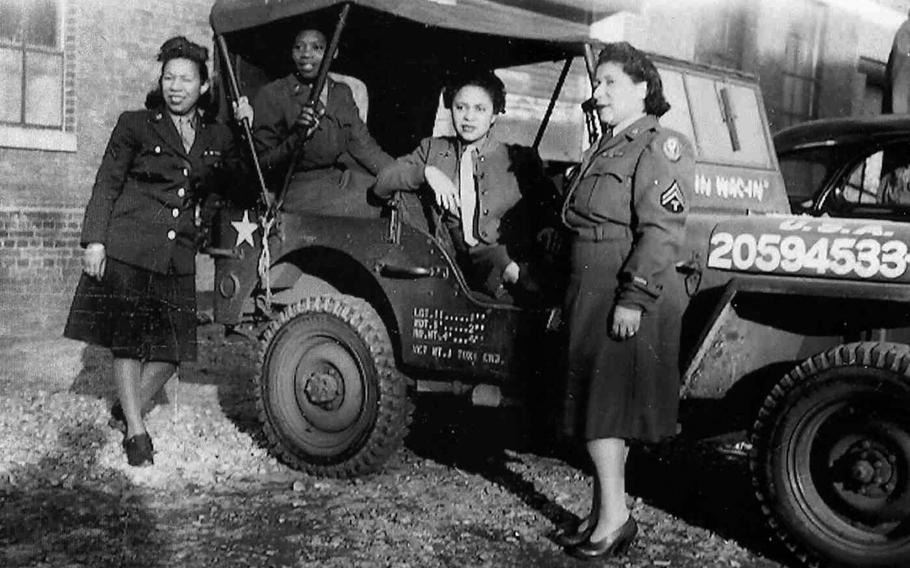 Q: Can you talk about some of the issues and challenges facing the women in this battalion during that time, and how that would affect one’s experience serving in the military?

A: One of the challenges that they faced, that I didn’t, was segregation. They were serving in the U.S. Army and they get to England and France, and they’re given segregated barracks. I can’t even begin to comprehend what that was like, but it’s startling. Then, you also have an Army of men who are resistant to having women serving in any capacity. That is something that resonates with me. In one instance in particular, the major in charge of the “Six Triple Eight” was told that her superior was coming to do an inspection.

When he got there, he asked why only two-thirds of the unit was in formation and ready for inspection. She told him that they had three different shifts [so that they could work on the backlog of mail around the clock] and the third shift was sleeping. He told her to get them up and she basically stood up to him and said, “Over my dead body.” That was during a time when she’s a woman, and a Black woman, standing up to a white man. The bravery and courage it took to put her troops’ well-being ahead of her own is a leadership lesson for everyone.

The challenges they faced were so significant compared to anything I might have faced. Honestly, women like those in the “Six Triple Eight” really bore the brunt of a lot of the challenges that went on to open up every unit for the women who serve today. We would do a disservice if we didn’t honor them and really pay homage to how much they went through and how much courage and grit they had.

Q: What kind of difference did their work in clearing the backlog of mail make during the war?

A: The tagline of the unit was “No Mail, Low Morale.” One of our ambassadors served in the Marine Corps and her grandfather served in World War II, and he specifically told her about this unit and about receiving mail after not having received it for so long, and what a huge impact that had on him. Even when I served in Iraq, letters from home just meant so much. Handwritten letters I used to receive from my grandmother, who’s since passed away, I still have those. It’s really deeply personal, and it keeps your motivation high, keeps you feeling like the end is in sight, and that there’s light at the end of the tunnel. Having that at a time when the world was on the line during World War II, they made such an immeasurable impact on the morale of U.S. troops.

Q: Why does highlighting the work of this all-Black female battalion matter?

A: I think it matters for a lot of reasons. I think that we sometimes take progress for granted and we think that maybe because we’ve made some progress in some areas, that there’s not still work to be done. I think that it’s so important to visit history and to be honest about it so that we don’t forget and don’t slip back into an environment that isn’t appreciative of everyone’s differences and contributions. I think it’s also important for representation and to know that World War II wasn’t just won by white men; it was women, it was Black women, it was our country being made up of a rainbow of contributing communities. I think it’s important on so many different levels.

Q: What do you hope people get from watching this film?