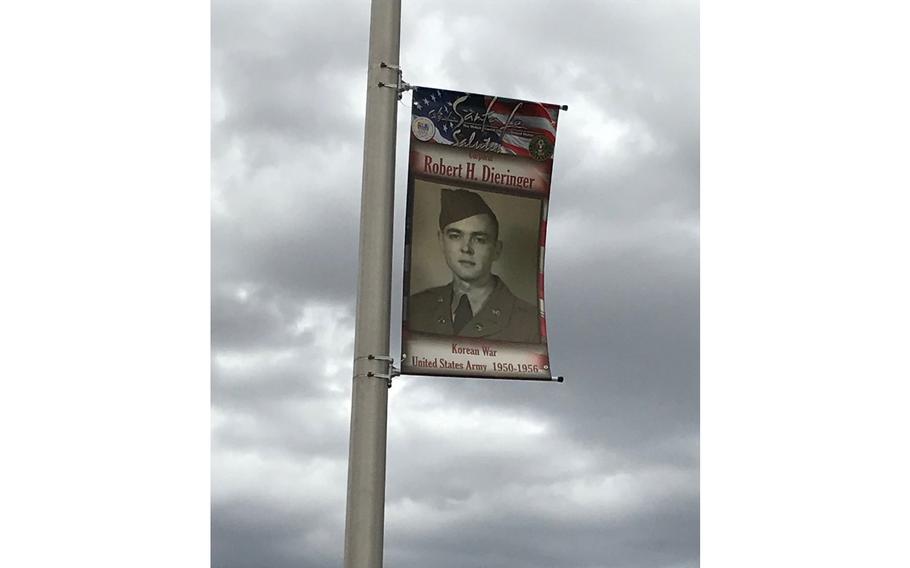 For the past three years, U.S. Air Force veteran Donald Christy has worked to help place some 200 banners that honor those who’ve served in the military on streetlights along the southern portion of Cerrillos Road in Santa Fe, N.M. (City of Santa Fe Facebook)

SANTA FE, N.M. (Tribune News Service) — For the past three years, U.S. Air Force veteran Donald Christy has worked to help place some 200 banners that honor those who've served in the military on streetlights along the southern portion of Cerrillos Road.

But with 142 additional banners on the waiting list and space dwindling along that part of Santa Fe's main drag, Christy said he's hoping the city will find more streetlights that can be used for the increasingly popular program.

"This is a great program, but we need more poles," Christy said. "A lot of these people [veterans] left and didn't make it back. We're just trying to honor them."

The City Council's Public Works Committee on Monday approved a resolution that expands light pole availability along Cerrillos to the intersection of St. Michael's Drive and Osage Avenue.

The resolution was unanimously approved with no discussion. If approved by the City Council, the resolution would clear additional poles along Cerrillos Road for the families in waiting and others interested in honoring a veteran.

The displays, part of the national Hometown Heroes banner project, include an image of the service member in uniform, his or her name, rank, branch and years of service. Family members pay for the displays, spending about $156 for the vinyl banners and aluminum brackets.

The banners run along Cerrillos between Rodeo Road and Interstate 25 and are on display between Memorial Day and Veterans Day, after which they are taken down to protect them from winter weather.

The first banners were installed that year after the council approved a resolution introduced by former Councilor JoAnne Vigil Coppler. The resolution allowed for 30 streetlight banners to be installed.

The resolution was later amended to allow for banners on more streetlights as the program grew in popularity. In 2021, Christy noted the city was running out of poles to hang the banners on and he reached out to the city to discuss expanding the program.

City Councilor Michael Garcia, who has taken up the issue after Vigil Coppler left the council, said he's proud the city has supported the program and doesn't expect any pushback to the proposal.

"I look forward to a stronger partnership for this program in the future," Garcia said.

Councilor Chris Rivera said he purchased a banner for his father, a Vietnam War veteran, and can speak from experience about the pride families have for their displays.

"It is a great way to honor our veterans for a couple of months," Rivera said. "They aren't up all year-round. It is just a great program in my eyes."

Garcia said he hopes the city can continue to provide support staff for the program, and Rivera said any extra work incurred by the city is worthwhile.

"It's worth doing," he said. "It's a program where even staff who are putting up the banners feel honored to do it."

Rivera and Christy said they are heartened by the attention the program has brought to the city. Santa Fe is one of 100 cities across 11 states and the only city in New Mexico to take part in the project.

Christy said he spoke with Mayor Alan Webber about the banners and was assured the program has the city's full support.

Public Works Director Regina Wheeler in a short phone interview Monday ensured the banners will be installed in the near future.

"The banners will be going up," she said. "That is for sure."