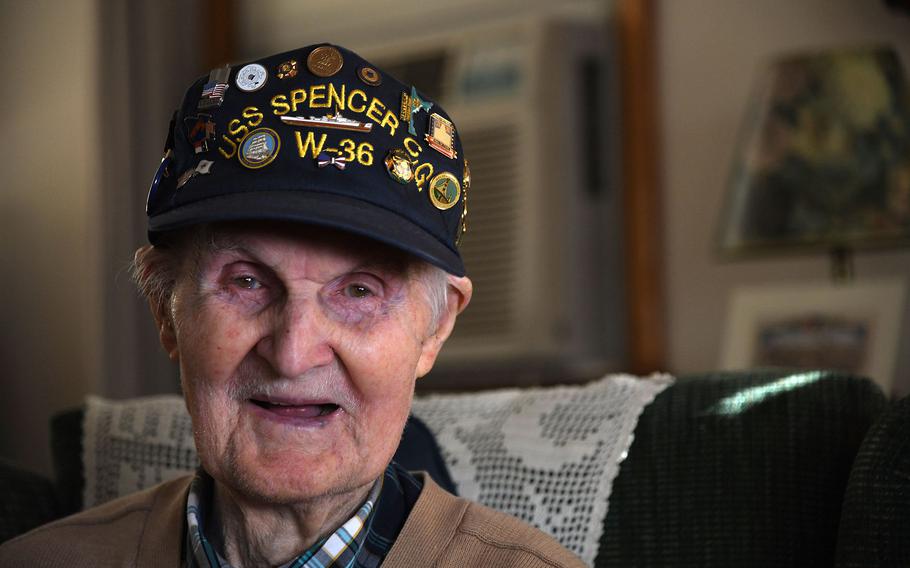 (Tribune News Service) — At 101 years of age, George Ellers seldom stands at attention. But let him hear the national anthem before a televised football game, and the World War II veteran clamors to rise.

“Get me up! Get me up!” Ellers shouts to his caregiver, Helen Davis, who helps him to his feet. There, the centenarian stands, buoyed by his walker, for the playing of the Star Spangled Banner. It’s how the Catonsville, Maryland, resident pays homage to both his homeland and those who died defending it.

“I took an oath to fight for my country, and that [oath] never ends,” Ellers said. “I’m proud of what I did.”

“I figured I’d at least get three good meals a day, and not be in the muddy trenches,” he said.

He did much more than that. In 1995, on the 50th anniversary of V-E Day, then-president Bill Clinton recognized Ellers and six other World War II veterans in a moving ceremony at Fort Myer, Va. Clinton introduced Ellers as “a seaman on Coast Guard boats, charged with protecting the merchant marine armadas that ferried food and supplies from America to Europe.”

Of the seven men and women who were honored that day, the president said: “In their bravery and that of their brothers and sisters in arms, America found the will to defeat the forces of fascism, and today we, the sons and daughters of their sacrifice, say ‘Thank you and well done.’ ”

Those words, and the 21-gun salute that followed, are memories cherished by Ellers.

“I think I shook Clinton’s hand three times,” he said.

During the war, as a seaman on the USS Spencer, Ellers helped man the machine guns as the ship, flanked by other Coast Guard cutters and Navy destroyers, led convoy after convoy of supply-laden vessels across the choppy North Atlantic, then rife with prowling U-boats.

On two occasions, in 1943, the Spencer engaged in fierce battles with German submarines, sinking both. At war’s end, the 327-foot cutter was cited as the only Navy ship to have brought down two subs single-handed. 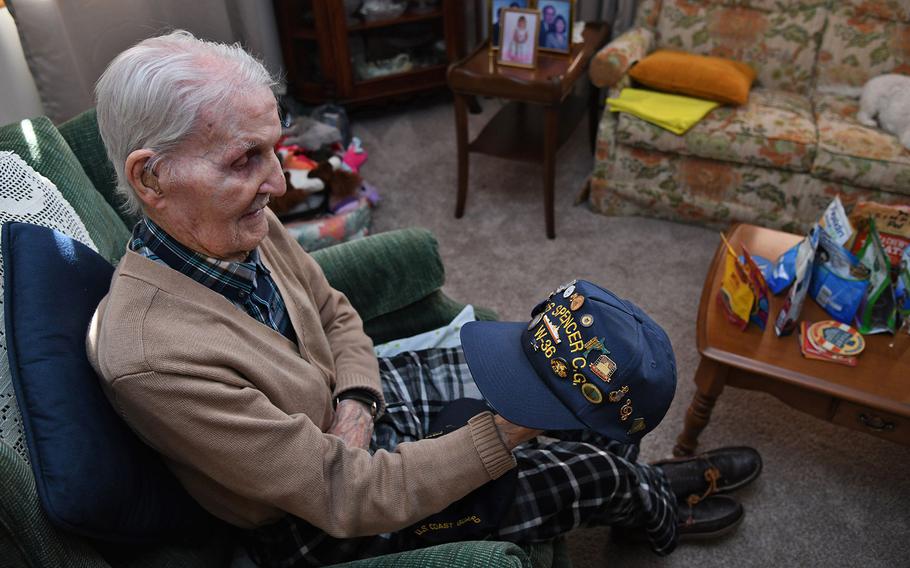 George Ellers, 101 of Catonsville, Md., looks at one of his souvenir hats in his living room. He served on the USS Spencer, which sank two German U-Boats during World War II. (Barbara Haddock Taylor, The Baltimore Sun/TNS)

Those were white-knuckle times, said Ellers.

“We saw [enemy] torpedoes pass by our bow, 20 feet away,” he said. “You say your prayers and think, ‘This is it, I just hope the good Lord accepts me.’ We were bombed from above, too — a couple of them fell 50 yards away — but we were never hit. We were lucky.”

On one of its 16 escort forays, the Spencer tangled with a U-boat in a battle that made headlines. On June 3, 1943, The New York Times reported the Navy vessel had detected a sub poised to attack its convoy and unleashed round after round of 600-pound depth charges which exploded “like boiling geysers.”

The noise was deafening, said Ellers: “It was like the whole ocean just opened up. After dropping the depth charges, we had to go full speed ahead or [the blasts] would have blown us right out of the water.”

When the sub tried to flee, The Times reported, the Spencer “held to the trail like a bloodhound” and, after a 30-minute chase, forced it to surface.

Ellers said the Germans “came up firing,” killing a crewman on the Spencer and shredding the cutter’s lifeboats. “But we fired back; they didn’t have a chance.”

The Spencer was prepared to ram the stricken U-boat when the enemy guns fell silent. Its crew had bailed out.

“We rescued about 40 of them from the water,” said Ellers. Then the sub sank, the Times reported, “its dark bow, cutting the water like a shark fin, disappearing last,” as the Spencer’s crew shouted “like a college cheering section.”

Months earlier, those 200 seamen had vowed not to shave until they’d downed a sub. That accomplished, Ellers and his mates put their razors to work.

“We treated them good,” said Ellers. “We gave them food [corned beef and cabbage] and hot showers, and kept a watch on them until dropping them off in Scotland. They were glad their war was over.”

Ellers himself was discharged in 1944 for medical reasons. The noise from those weapons had played havoc with his hearing. He returned home, married, settled in Catonsville, Md. — the first real home he’d ever had — raised a family and set to work as a house painter, a job he took pride in for 75 years. 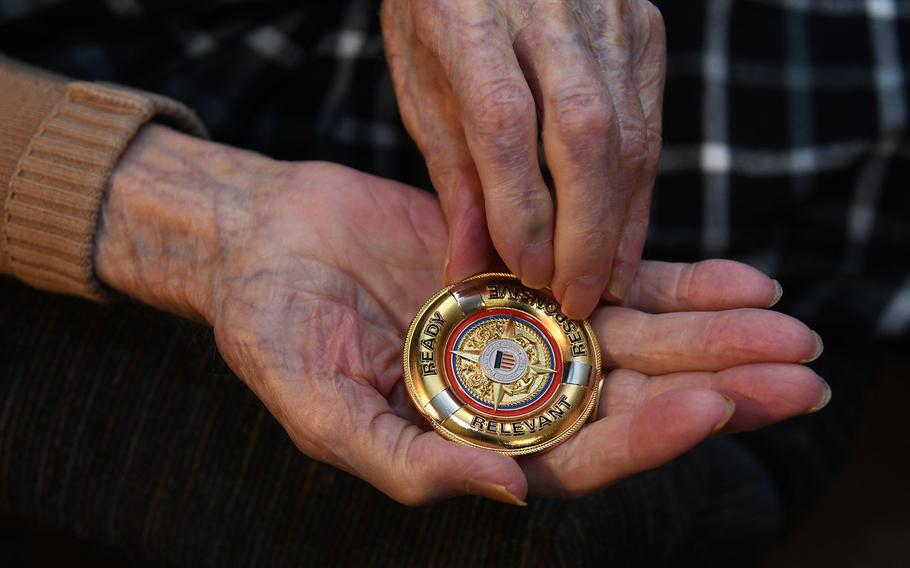 George Ellers, 101of Catonsville, Md., holds a challenge coin that was presented to him by a U.S. Coast Guard Admiral. He served on the USS Spencer, which sank two German U-Boats during World War II. (Barbara Haddock Taylor, The Baltimore Sun/TNS)

“Dad painted his last kitchen at 90,” said his son, George Ellers Jr.. “His work was impeccable; he could paint with either hand and always used a brush, never a roller. People were willing to wait six months for him to help them.

“He’s a very strong-willed person known for his hard work, loyalty and honesty — all values that people today] seemingly have lost.”

At 97, while painting the ceiling in his home, Ellers fell and broke a hip. He crawled from hallway to bedroom to reach a phone to call for help. That same year, he finally quit driving. Age has slowed but seldom stopped him. At 89, he took piano lessons and, in time, performed three classical recitals at a local senior center.

“He’s always asking to go to Home Depot, to get stuff to fix up the house,” said Davis, his caregiver. “In the store, he takes his little walker and goes around like the Energizer bunny.”

Since turning 100, Ellers has painted his fence, re-stuccoed the front steps, stained the stairway banister, resurfaced a concrete wall in his garage and planted a flagpole, in the side yard, to honor Old Glory. He was born on Sept. 14, the anniversary of the day Francis Scott Key wrote the Star Spangled Banner in 1814.

“Dad is all about patriotism,” said his daughter, Elizabeth Ellers. “When he talks in his sleep, he’ll mention his friends in the war. Twenty years ago, he attended a ceremony given by a Russian delegation in Washington to thank the Coast Guard for rescuing their sailors whose ships had been sunk during the war.”

Mention his longevity and he’ll smile and shrug. His medical needs are few: a daily vitamin, a baby aspirin and a pill for his aging prostate.

Last summer, he took part in Catonsville’s Fourth of July Parade, a 100-year-old veteran sitting atop the back of a black Mercedes convertible, American flag in hand, and waving to onlookers.

“He loved that,” his daughter said. “Later, dad said, ‘Do you think they’ll ask me to be in the parade again next year?’ “

His appearance enthused the crowd. Months later, on Halloween, a trick-or-treater who knocked on his door asked, “Doesn’t that old guy who rode in the parade live here?”

Told that he did, the youngster said, “Could you please thank him again for his service?”