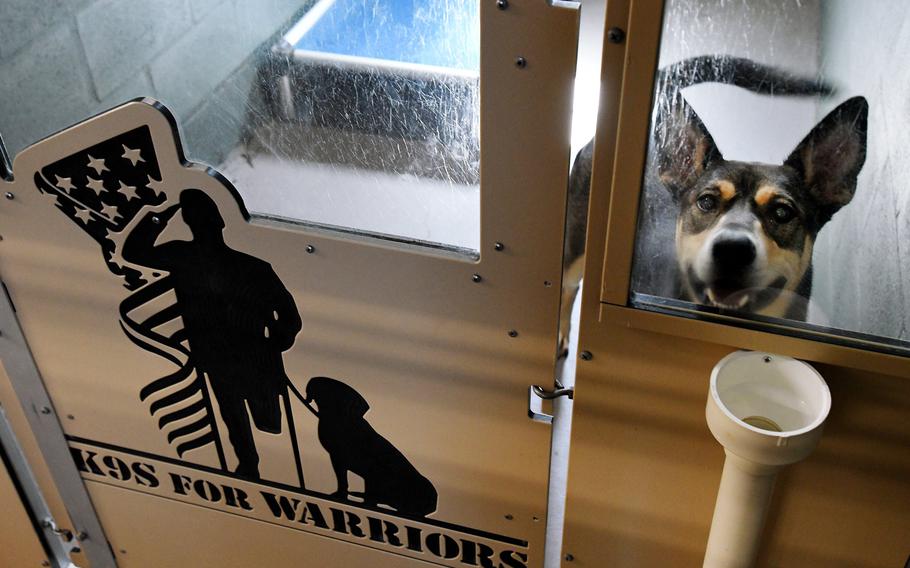 This is one of the dogs in training in its kennel at the K9s for Warriors campus in Nocatee, Fla., in 2020. (Bob Self, Florida Times-Union/TNS)

Signed by President Joe Biden, the bill implements a new policy on service dog therapy for veterans, exactly what Ponte Vedra Beach, Fla.-based K9s for Warriors has been pushing for in recent years to help them better manage their lives despite PTSD and other post-combat traumas.

K9s for Warriors CEO Rory Diamond began working on it five years ago with local congressmen, finding facts to back up the need that saw it finally passed. Now the VA must open a service dog referral program to veterans with PTSD to help organizations like K9s for Warriors.

"It doesn't have any money attached to it, so it won't answer our financial problems, but it makes it possible to do a pilot project on working together," Diamond said. "It will look more like an organization like K9s for Warriors working with the VA and finding a way to use current VA resources to get more dogs in the hands of more warriors. It's still in the formation stage of working with them as to how they will help organizations like us."

The National Center for PTSD reports that soldiers who have been on missions that exposed them to "horrible and life-threatening experiences" can lead to PTSD. It says that 11 to 20 of every 100 veterans who fought in Operations Iraqi Freedom and Enduring Freedom have PTSD in a given year.

The nonprofit K9s for Warriors matches veterans with dogs that can help mitigate their symptoms as well as restore their confidence and independence. It has trained about 700 Warrior/K9 teams after rescuing about 1,300 dogs, many from high-kill rescue shelters. 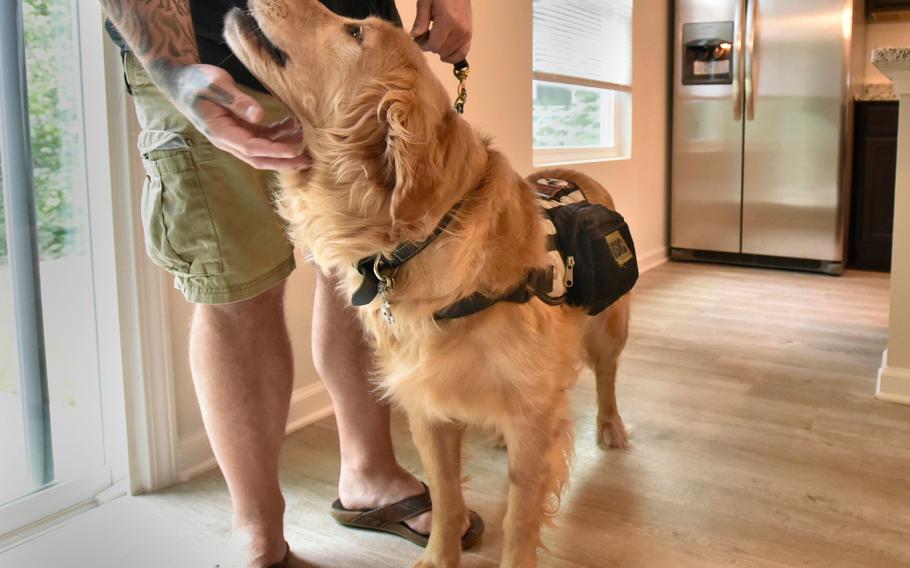 K9s for Warriors service dog Kup gets a rub from Marine veteran Chris Langston after a 2019 ceremony of a new home. (Will Dickey, Florida Times-Union/TNS)

Diamond said he began working on the first draft of the Puppies Assisting Wounded Servicemembers for Veterans Therapy Act — called PAWS — with then-Rep. Ron DeSantis, but it stalled in Congress. A second version presented the next year made it further, then Diamond said he worked with Rep. John Rutherford on a third version. The fourth attempt, sponsored by Rep. Steve Stivers, "was the one that worked," Diamond said. It was signed by the president on Aug. 25.

The PAWS bill specifically requires the VA to implement a five-year pilot program to "provide canine training to eligible veterans diagnosed with post-traumatic stress disorder" as part of a total health program. The bill mandates that the pilot program be carried out by not fewer than five VA medical centers in geographically diverse areas.

Eligible veterans are those enrolled in the VA health care system who have been recommended for participation by a mental health care provider or clinical team, the bill says. Then the VA must work with accredited non-government groups like K9s for Warriors that provide canine training.

"Veterans who participate in the program are authorized to adopt the dog they assisted in training if their health provider determines it is in the best interest of the veteran," the bill's summary states. "The VA must establish processes to document and track the progress of participating veterans with respect to health benefits and improvements."

The sad part is that many people probably thought the VA already helped a disabled military veteran get paired with a service dog. But the federal agency never has, until now, Diamond said.

"The VA has fought doing that year after year. In fact, they won't even acknowledge that a service dog will help a veteran with post-traumatic stress," he said. "So K9 for Warriors partnered with Perdue University and came up with a stack of peer-reviewed, published and prestigious journals (to) show that the dogs work, that they dramatically change the lives of warriors and took that to the VA."

A study by researchers Marguerite O'Haire and Kerri Rodriguez shows that psychiatric service dogs are a complementary treatment for military veterans with PTSD.

"The addition of trained service dogs to usual care may confer clinically meaningful improvements in PTSD symptomology for military members and veterans with PTSD, though does not appear to be associated with a loss of diagnosis," its conclusion states. The Congressional Budget Office expects the federal pilot program will cost the VA $30 million over its five-year period. The program's national success will be monitored by the U.S. Government Accountability Office and Congress.

Diamond said the pilot program is a "strong first step" toward the VA recognizing that service dogs can help a veteran. He hopes that it becomes permanent and plans to work on a further PAWS act that has funding.

"We will keep pushing and keep kicking that door open wider and wider until the VA becomes a full partner in this," Diamond said. "Until then, organizations like ours will be privately funded and we will simply not be able to serve the number of veterans we need to."

K9s for Warriors had been mainly helping veterans of more recent military operations in the Middle East, Iraq and Afghanistan. But when studies showed that suicide disproportionately affects older veterans who previously had not been eligible for K9s for Warriors' services, the 10-year-old organization began working to provide canine companions to Vietnam War veterans.