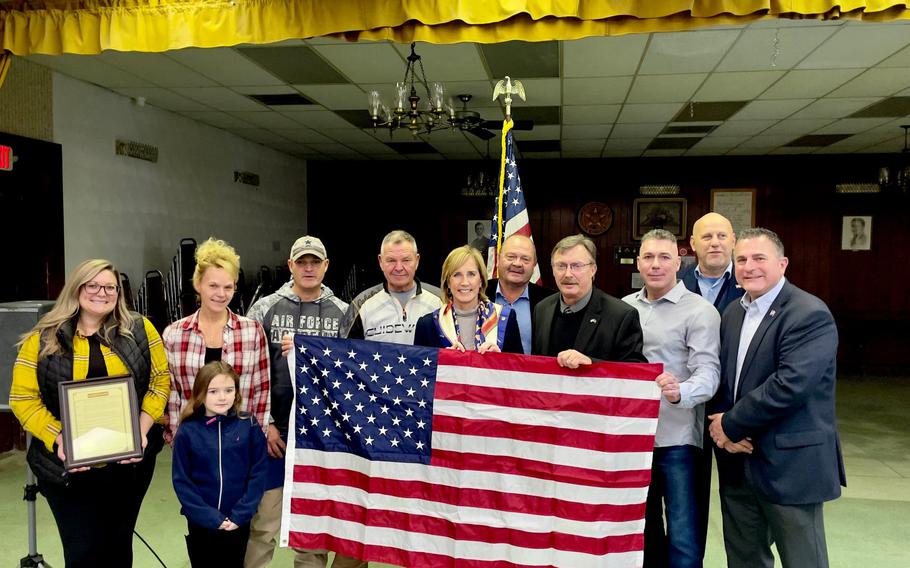 Rep. Claudia Tenney of New York presents the family of 100-year-old Thomas S. Nelson of Ilion, N.Y., with an official copy of the Congressional Record recognizing his heroism, and a flag flown over over the U.S. Capitol. The event was held at the Mohawk (N.Y.) American Legion. (Rep. Claudia Tenney/Facebook)

(Tribune News Service) — Thomas Strayer Nelson of Ilion, N.Y., a 100-year-old World War II veteran and Pearl Harbor survivor, was honored Sunday when Congresswoman Claudia Tenney presented his family with an official copy of the congressional record recognizing his heroism during a special event at the Mohawk American Legion.

Tenney related Nelson’s actions during World War II in a speech on the floor of the United States House of Representatives. She also presented the Nelson family with an American flag that was flown over the United States Capitol in honor of Nelson’s service.

Nelson is one of the last living survivors of the Pearl Harbor attacks, Tenney said.

Nelson was a 19-year-old sailor assigned to the USS Wasmuth in Pearl Harbor on Dec. 7, 1941, when the Japanese launched their attack. He immediately jumped into action to defend the Wasmuth, its crew and other lives.

Nearly a year later, the Wasmuth, a World War I destroyer that was converted to a minesweeper in 1940, was knocked off its tracks by two mines in the Pacific. The Wasmuth sank, but its 134-man crew was rescued, in large part due to Nelson’s efforts.

“It was my incredible honor to meet Mr. Thomas Nelson earlier this year to celebrate his 100th birthday and recognize his legacy as one of the oldest living survivors of the attacks at Pearl Harbor,” said Tenney, a Republican from New Hartford. “His heroic military career will now live in the Halls of Congress forever, enshrined in the official congressional record. It is a fitting tribute to this remarkable man.”

Visit The Times Telegram at www.herkimertelegram.com