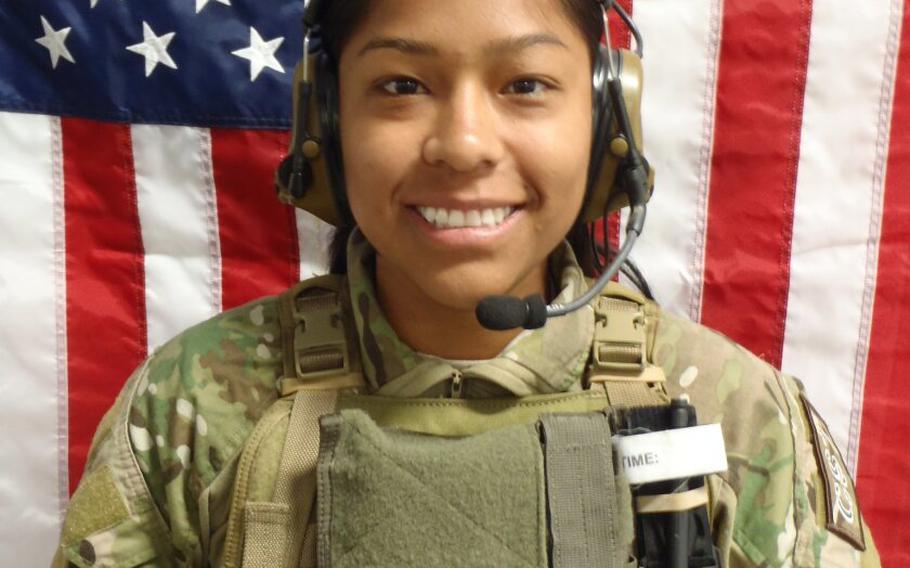 Capt. Jennifer Moreno was an Army nurse killed in Afghanistan in 2013 while serving with Special Operations forces in the Kandahar province. She was 25 years old. A 1st Lieutenant when she was killed, Moreno was awarded the Bronze Star with a “V” device for valor and promoted to captain posthumously. (U.S. Army)

The new law would rename the hospital after Capt. Jennifer Moreno, an Army nurse killed in Afghanistan in 2013 while serving with Special Operations forces in the Kandahar province. She was 25 years old. A 1st Lieutenant when she was killed, Moreno was awarded the Bronze Star with a “V” device for valor and promoted to captain posthumously.

“For far too long, our country has failed to give women servicemembers and veterans the recognition they have rightfully earned and deserve for their service and commitment to protecting this nation,” said Levin in a statement. “Although this effort does not make up for all of the appreciation women veterans and servicemembers are still owed, it’s my great hope that renaming the San Diego VA Medical Center after a distinguished local woman veteran inspires similar recognition across the country.”

The bill was co-sponsored by all 53 members of the California delegation — Democrats and Republicans — and passed the House unanimously, said Eric Mee, a spokesperson for Levin, in an email. It now goes to the Senate.

“With that strong bipartisan support, we are optimistic it will pass the Senate and reach the president’s desk,” Mee said.

Moreno grew up in Logan Heights and graduated from San Diego High School in 2006. She attended the University of San Francisco on an ROTC scholarship, where she studied nursing and earned her Army commission upon graduating. She went to jump school in 2009 — rare for a nurse — and was stationed at the Madigan Army Medical Center in Washington.

In 2013, at a time when women were still barred from combat roles, Moreno volunteered to serve in Afghanistan as a cultural support team member with the Joint Special Operations Command and the 75th Ranger Regiment.

She was killed in action on Oct. 6, 2013, in a Special Operations raid at a Kandahar compound thought to house a high-value Taliban target, the Army said at the time. During the assault, an Afghan woman wearing explosives detonated herself, wounding several soldiers and triggering other improvised explosive devices hidden in the compound. Moreno rushed to aid a wounded soldier and was killed when yet another IED detonated.

Karin Brennan, an Army veteran living in Carlsbad, led a panel of local veterans groups to identify a local veteran to name the medical center after. Moreno’s name soon rose to the top of their list, she said, and the panel began interviewing people who knew Moreno.

“The more we learned, the more people we interviewed, it was just remarkable to me how much she impacted their lives,” Brennan said in an interview.

Brennan, who left the Army as a sergeant in the 1970s, said she hopes that by recognizing the legacy of women veterans and women combat veterans, the VA Medical Center will become a more welcoming place for women.

“I would like women to view the VA and the VA Med Center as a place for them,” Brennan said. “I hope it helps people appreciate that valor has no gender.”

The bill also recommends the VA set aside a prominent space to be named after Navy Capt. Kathleen Bruyere, a longtime San Diego resident who, while in the Navy, was a driving force for women’s equity and helped shape the military’s policy on sexual discrimination. Bruyere died in 2020 and is buried at Miramar National Cemetery.