Details emerge of Afghanistan raid in which four GIs were killed 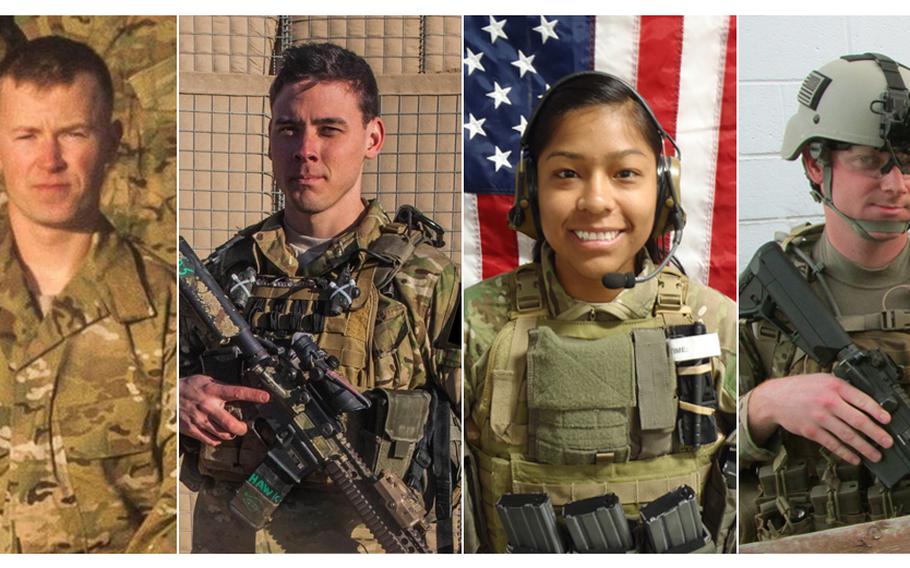 Four soldiers killed over the weekend in southern Afghanistan were ambushed during a special operations night raid aimed at a high-value Taliban target, though details remain unclear as a military investigation into the attack proceeds.

A U.S. military official who spoke on the condition of anonymity said the Army Ranger unit was arranged along the wall of the targeted compound and preparing to enter when an insurgent detonated a suicide vest.

The investigation is seeking to determine whether the suicide bomber was a woman.

In addition to the four Americans killed, 30 more U.S. personnel were injured on the mission — all of them Army Rangers — according to 75th Ranger Regiment spokeswoman Tracy Bailey.

“I can’t get into the details,” Bailey said, because the incident is under investigation. “I can tell you we had 30 wounded.”

The preliminary report said an Afghan interpreter was among the wounded as well.

After the initial suicide vest exploded, insurgents then detonated a series of 11 to 13 improvised explosive devices set up in the compound.

“We took initial casualties with the suicide vest, but a large portion of them took place when the multiple IEDs exploded,” said Matthew Leas, a Kabul-based spokesman for Special Operations Joint Task Force-Afghanistan.

However, Hashim Agha, district governor of Zhari, where the operation took place, said the IEDs were detonated first, followed by attacks by multiple suicide bombers in the compound.

The explosions also killed an insurgent’s wife, the only civilian killed in the operation, according to a preliminary report from the U.S. military. The report said one additional insurgent was killed during the operation.

Agha, however, said four militants were killed and 12 more were wounded.

The operation resulted in the deaths of two Rangers, Pfc. Cody Patterson, 24, of Philomath, Ore., and Sgt. Patrick Hawkins, 25, of Carlisle, Pa., with 3rd Battalion, the 75th Ranger Regiment. Sgt. Joseph Peters, 24, a special agent with the 286th Military Police Detachment, and 1st. Lt. Jennifer Moreno, 25, a nurse from San Diego, working with the special operations cultural support team, were killed as well.

Bailey did not know how many of the wounded were medically evacuated from Afghanistan and how many remained in the country to recuperate.

Army Lt. Col. Clarence Counts, a spokesman for the Joint Staff at the Pentagon, said the soldiers followed standard tactics, techniques and procedures.

“The sequence of events will be analyzed to figure out exactly what happened and if anything could have been done differently,” he added.