‘Not on my watch!’: War remembrance tourism fights for life 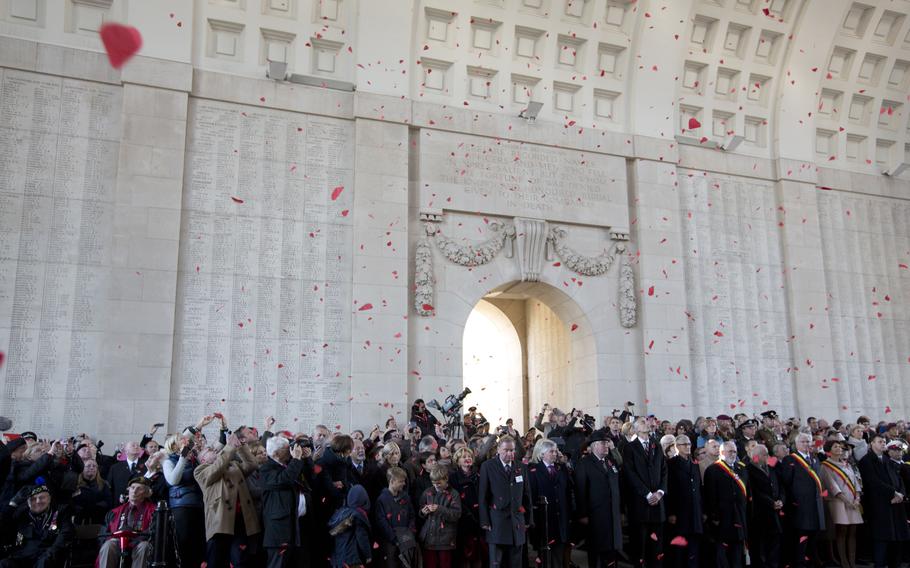 Red paper poppies fall from the ceiling during an Armistice Day ceremony at the Menin Gate in Ypres, Belgium, on Tuesday, Nov. 11, 2014. Since the end of World War I in 1918, millions of visitors have flocked to memorials in northern France and Belgium to pay tribute to the fallen. (Virginia Mayo/AP)

POPERINGE, Belgium — Simon Louagie dreaded losing Talbot House, a World War I soldiers' club that has become an institution in remembrance tourism on the Western Front where soldiers from all corners of the globe fought amid untold carnage just over a century ago.

For months last year, a COVID-19 lockdown closed the club which had always been an open house. Once it was for Commonwealth soldiers who fleetingly shed the fear of battle in Flanders fields that was within earshot. For generations since, people found history, solace, wisdom and an understanding at Talbot House about why the motto of this region in western Belgium is "Never into war again."

Since the end of World War I in 1918, millions of visitors — from as far away as the United States New Zealand, and South Africa — have flocked to memorials in northern France and Belgium to pay tribute to the fallen.

Another Armistice Day beckons on Nov. 11 and the outlook remains bleak. 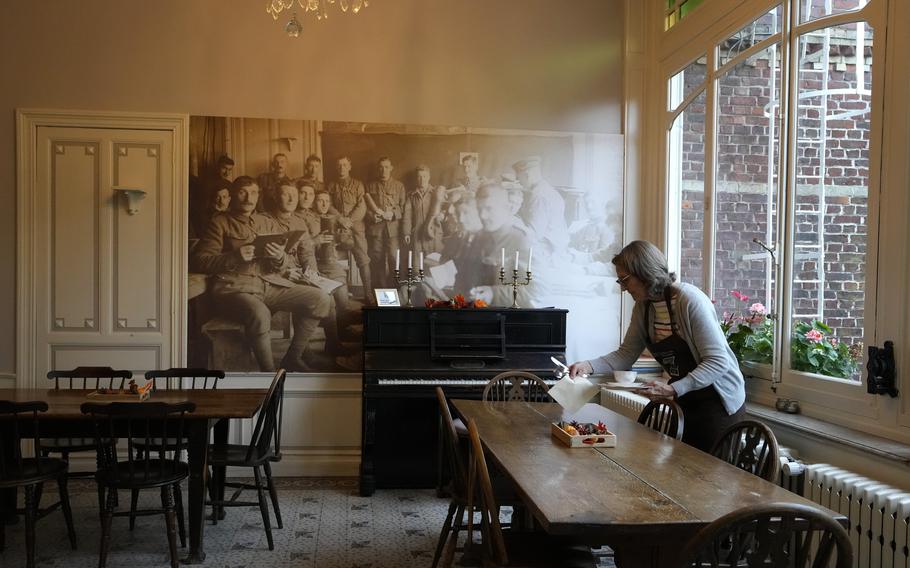 Talbot House manager Louagie remembers that when funds were running low and doors were closed, only one thought ran through his head: "Not on my watch." From as many as 500 guests a day, he sometimes found himself alone.

The house, he said, "needs noise. It needs piano music. It needs visitors, schoolchildren, people playing chess. Cups of tea, rattling in the kitchen to make it come alive. I need to hear the kettle whistle," he said.

"We cannot disappoint all those generations before us by letting it close down," he said. The thought has echoed around the region where hundreds of thousands lost their lives during the four years of fighting which finally led to the victory of allied forces over Germany. 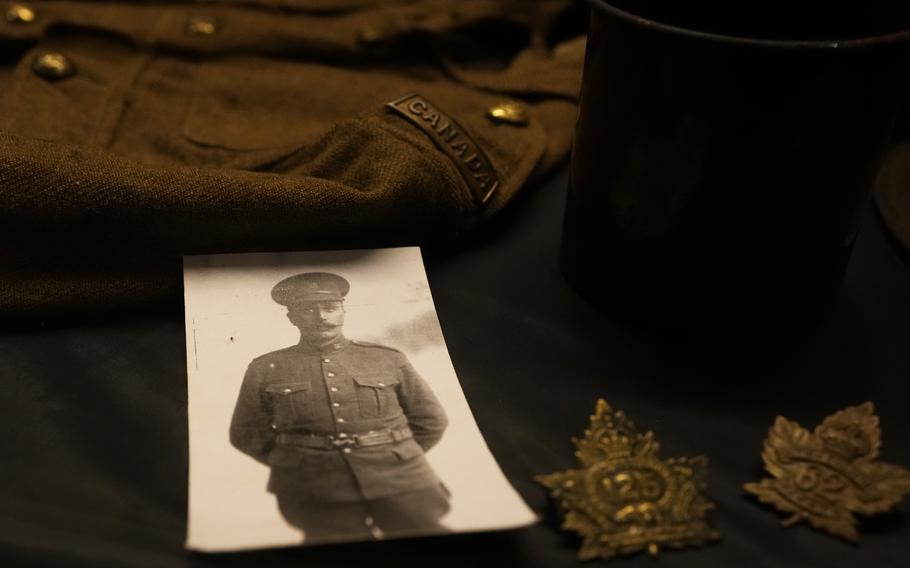 A photo, badge and uniform of a Canadian World War I soldier are on display in a presentation case at Hooge Crater Museum in Ypres on Thursday, Nov. 4, 2021. (Virginia Mayo/AP) 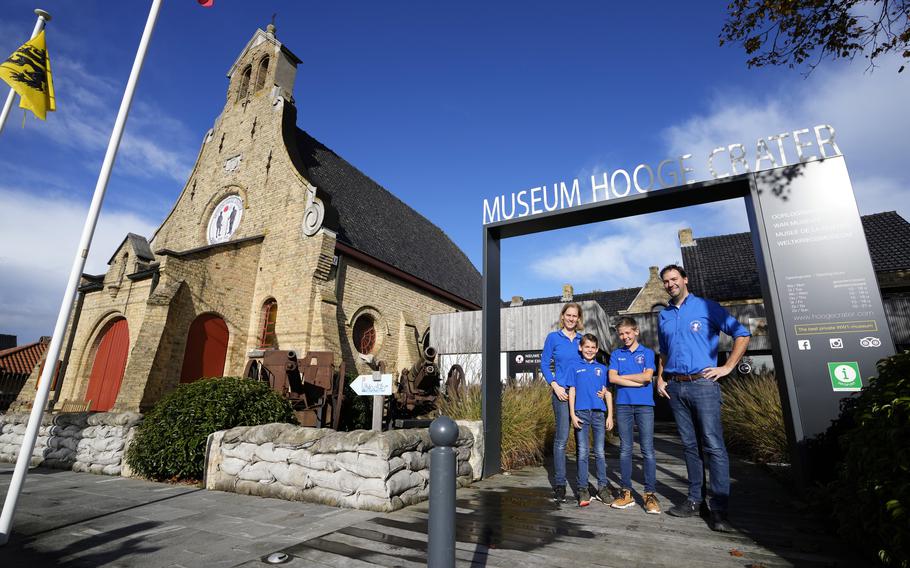 Nick Benoot, who runs the small Hooge Crater Museum not far from Poperinge could not believe it when at the end of 2019, schools started to cancel trips because of reports of a virus in Wuhan, China.

Like Louagie, he had plunged money into the business and needed any income he could get. "Seriously, do you mean that? This is in China. This is far, far away from us," he remembers saying. But the reality of the pandemic, which has since claimed at least 5 million dead across the globe, soon sank in and he had to close on March 13, 2020 - a somber day he remembers well.

From 65,000 paying visitors in 2017 to just 3,000 last year, the numbers demonstrated how remembrance tourism slumped throughout the region.

"It was like we went bankrupt. We had to close everything down," he said.

But each man dealt with it in his own way and is still around to tell his story.

Crowdfunding was the answer for Louagie. Last year, a 98-year-old World War II veteran raised money by walking from a war graves cemetery to Talbot House, cheered on by locals who pulled money out of their wallet when they were not applauding. When a local died, the family asked that instead of flowers, mourners donate money to Talbot House.

"It became very emotional when I saw how many people cared so deeply," Louagie said.

As virus measures eased recently thanks to Belgium's vaccination drive, some visitors enjoyed their breakfast at Talbot house. And just like old times, praise was heaped on English volunteer Libby Madden for her Victoria sponge cake. "You know, we very much want to keep the spirit of this wonderful place alive," she said.

Flanders' fields were once so war-scarred that churches and castles simply vanished as rubble under the mud. Much around Ypres has been restored to its former splendor and imbued locals with an unshakeable sense of optimism.

Benoot was looking at an empty parking lot last year and had missed the din of spoken English from heaps of British tourists that resounded in the museum and cafe. Yet this week, "we have had the first British (bus) in two years."

Even as his income dwindled in the middle of the pandemic, Benoot understood that the message of "the war to end all wars" still needed to be passed on to younger generations.

At 37, he thought himself to old to convey the message to kids, so he left it to his sons Louis and Arthur, 10 and 8, who are now YouTube whizzes to teach kids about gas masks, helmets and medical kits. The Hooge Boys are a hit now.

"We don't do what all the rest does. So I think we have a way to survive," Benoot said.

Even the Last Post ceremony in nearby Ypres — a daily, mournful bugle call harking back to 1928 that had only briefly stopped during World War II — was at risk of being silenced. The tradition has the bugle playing under the Menin Gate where some 55,000 names of soldiers whose remains were never found are engraved.

Yet it pulled through. Volunteers refused to stop and pulled strings all the way up to the top political posts to ensure its continuation, even if it had to be scaled down.

"During COVID, there was only one bugler and the names of 55,000 soldiers," said Benoit Mottrie, the head of the Last Post Association.

On Thursday, there should be the full complement of six buglers again, backed up by a piper, a choir, a band and several hundred invitees and poppy promenade walkers. Even the Belgian prime minister will show up.