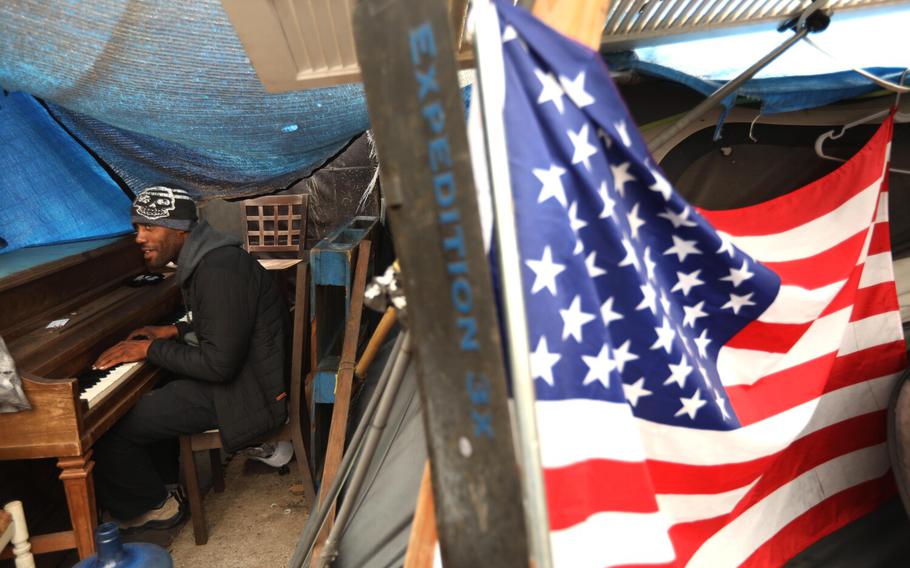 Iraq war veteran Lavon Johnson, 35, plays his piano inside his tent along Veterans Row along San Vicente Boulevard in an unincorporated area near Brentwood on Oct. 30, 2021. Johnson was stationed in Fort Hood and deployed to Iraq in 2006 and 2007 and has been living homeless on Veterans Row for about a year. Asked why he thought it took so long to get the veterans help, Johnson is quick to answer: "Pride. Money. Nobody wants to admit a mistake was made." He will be relocated to an individual tent on the VA campus before clearing of the encampments begins on Nov. 1. Veterans Affairs Secretary Denis McDonough, who visited the encampment in October, said last week that the about 40 veterans from Veterans Row would be housed by November. (Genaro Molina, Los Angeles Times/TNS)

LOS ANGELES (Tribune News Service) — Two days before the impending move and Lavon Johnson had yet to pack.

But the Iraq war veteran didn’t seem too worried as he sat at the piano he’d rescued from the trash two blocks away. He began to play Beethoven’s “Für Elise” along San Vicente Boulevard near Brentwood. His American flag — held up on one side by a hanger attached to his tent — waved in the breeze.

Johnson planned to be the last one out of the Veterans Row encampment, where he has lived for about a year. His way of ensuring that the nearly two dozen unhoused veterans remaining made it out safe before a scheduled cleanup on Monday.

“It never takes me long to get ready,” the 35-year-old said with a quick smile.

The encampment, adjacent to the historic Veterans Affairs campus in West Los Angeles, has become a focal point for homelessness in the city, with mayoral candidates making visits regularly over the last year. The last census of homeless people in Los Angeles County found roughly 3,900 homeless veterans among the county’s total of 66,000 people without housing.

Veterans Affairs Secretary Denis McDonough, who visited the encampment in October, said last week that the about 40 veterans from Veterans Row would be housed by November.

Already by Saturday, 14 people had moved from the sidewalk into tents on the sprawling VA campus, said Robert Reynolds, a veteran advocate with AMVETS. Another three have registered to go in, but have not yet moved.

All Johnson has known throughout his life is the military.

Born in Germany to parents in the Army, Johnson went on to enlist in the same branch in June 2004. He was stationed in Ft. Hood and deployed to Iraq in 2006 and 2007.

If you ask him when and how he got to California, he’ll tell you he doesn’t remember. But he can recall what’s happened since he’s been here. Especially the year he’s spent living in the Veterans Row encampment.

“It’s like I was sent here,” Johnson said, as he looked at the 20 remaining tents along the sidewalk.

Asked why he thought it took so long to get the veterans help, Johnson is quick to answer: “Pride. Money. Nobody wants to admit a mistake was made.”

Around 11 a.m., Johnson rode his bike alongside the tents, popping his head in to check with some of the veterans. He passed more than a dozen flags and a few signs notifying everyone of the scheduled cleanup.

To those along the line, Johnson is considered the protector. He often stays up at night to make sure everyone is safe. A reminder of the danger is scrawled in blue on a wall: RIP Andre.

This site was connected with two homicides within six months this year. In April, Pedro Flores, 34, was arrested on suspicion of murder and assault with a deadly weapon after he ran over a person living in the encampment, allegedly dragging the man’s body 200 yards under his vehicle. In September, the encampment was the site of a stabbing that killed an unhoused male veteran.

Reynolds has had more than one nightmare about veterans getting killed along the street. The Iraq war veteran once slept in a sleeping bag along the street after not being allowed into a VA program in 2018 because of his service dog.

“I saw veterans all over the sidewalk, no outreach coming out, police coming through and removing them every couple of weeks,” the 33-year-old said. “I grew up in a large military family and was always taught to respect veterans. And so seeing this struck the deepest chord. I just couldn’t believe I was seeing people that went to combat sleeping on the sidewalk and dying out here.”

Outside the tents were signs posted about the plight of homeless veterans: “We fought for you please fight for us.” Black storage bins were placed outside tents with a sheet to document inventory for the move.

Reynolds has helped set up 20 tents on the VA campus, including new cots, blankets and towels for those moving in from Veterans Row. A U-Haul will arrive Monday to help load up everyone’s belongings in order to place them in storage, if needed.

Ronald Estrada-Ortiz, a Marine Corps veteran, got moved onto the VA campus two days ago. He was able to bring clothing and two backpacks with him.

Estrada-Ortiz enlisted when he was 18 — he graduated from high school on a Wednesday and was a Marine by that Friday — motivated by the events of 9/11.

But he expressed frustration at the length of time it took for veterans to get help, calling it “a money issue.” He also questioned misperceptions community members might have about the unhoused.

“We just got dealt the wrong hand,” the 35-year-old said.

When ask when he’s supposed to move, Johnson said he is winging it. He doesn’t like making plans anymore.

“Everyone wants me in there,” he said, from his place at the piano. He doesn’t really want to move, but he’d go though because, as he jokes, “these guys can’t watch out for themselves.”

He only plans on taking the “bare necessities” with him. That includes the piano he rescued six months ago.

He points out an information booth on the VA campus. His piano’s new home.