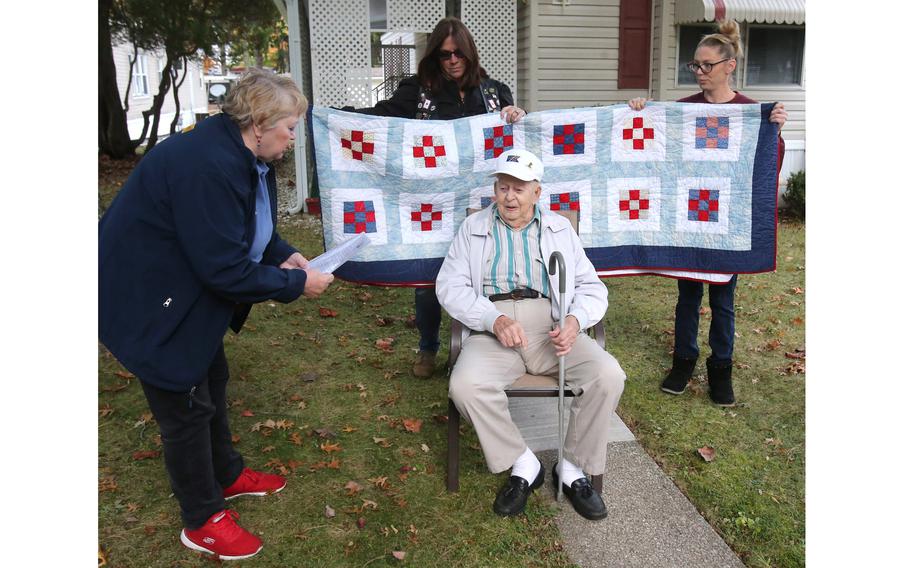 NORTH CANTON, Ohio (Tribune News Service) — Denver Conard, who served in the U.S. Army in World War II, turned 100 Friday and in an emotional ceremony received enthusiastic and heartfelt recognition of his service from more than 75 years ago.

About 40 people, many of them veterans or family members of veterans, stood as the retired plumber sat on a chair outside his mobile home at Tower Terrace.

An officer for the group Blue Star Mothers, Ohio Chapter 2, presented him with a quilt made by the group Quilts of Valor and a red, white and blue challenge coin thanking veterans for their service. He also got a Quilt of Valor recognizing his service in the Army from 1942 to 1946 and a card from the volunteers of the Akron-based chapter who made the quilt.

Members of groups such as the American Legion Riders, Patriot Guard and the Warthogs, many of them wearing black leather jackets, stood with American flags.

“My name is Sue (Simmons) and I’m with Quilts of Valor,” said Simmons as she shook the new centenarian’s hand. “We’re going to wish you a happy birthday and give you a quilt. A quilt of valor.”

Two women draped the quilt over Conard’s shoulders amid the chilly air as Conard thanked them. The quilt had a pattern with white, red and light blue squares with a red, white and blue border.

Simmons then read a statement to Conard. She talked about how a woman in Delaware, Catherine Roberts, whose son was deployed to Iraq, started Quilts of Valor in 2003 and how the group had distributed 284,000 quilts to members and former members of the Armed Forces.

She said each quilt has three layers. The top layer with its many colors, shapes and fabrics recognizes the many communities the recipient is part of. The filler “is the center of the quilt” that the givers hope will provide warmth and comfort. The backing represents the strength of the recipient and the support of their family, communities and nation. The stitches represent love, gratitude and tears of the maker.

“Please use this quilt on your bed. Snuggle up with it with your loved ones on your couch or wrap your loved ones in it. We would like you to use it to keep you warm and feel comforted by it,” Simmons said.

“First, we honor you for your service. We honor you for leaving all you hold dear to stand in harm’s way in times of crisis, protecting us from the effects of war. Next, we know that freedom is not free. The cost of freedom is the dedication of the lives of men and women like you. And this quilt is meant to say, ‘Thank you for your sacrifice.’”

Conard, clearly emotional, thanked the crowd with a salute as they applauded. 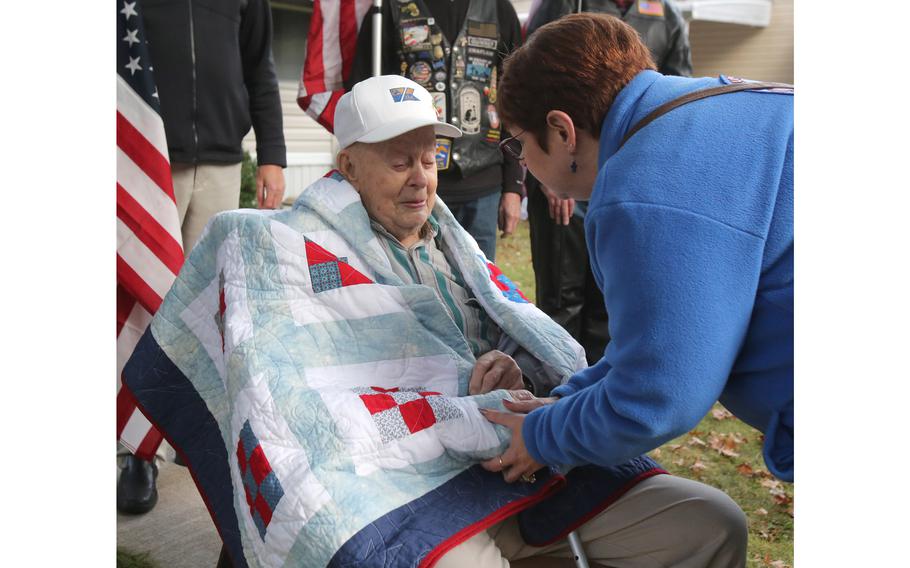 Brenda Russell, president of Blue Star Mothers, wishes a happy birthday to WWII veteran Denver Conard. Conard became emotional when he wished his wife could have been there for the presentation of his Quilt of Valor. She died nearly two years ago. (Scott Heckel, The (Canton, Ohio) Repository/TNS) Christina Trompower, a Canal Fulton-based constituent service coordinator for Gonzalez, then presented him with the certificate and a challenge coin with the seal of the U.S. House of Representatives. The other side of the coin had the state of Ohio in gold with a red background with a star in the 16th Congressional District. The coin has the words “Empowering Northeast Ohio. Constituents First.”

“I wish my wife was here,” said Conard, who spoke of his wife of nearly 70 years, Velma Lee Conard, who died nearly two years ago at the age of 89. They did not have children.

“She’s watching you right now,” said Trompower, who thanked him for his service and sacrifice for the United States. “Celebrating this milestone birthday with you is amazing. I have a certificate for you from the congressman. And I think you know what these are.”

Trompower handed him the challenge coin.

“That’s nice,” he said as he looked at the coin. “I appreciate that.”

Trompower said, “Of course, well, we appreciate you.”

With his permission, she gave him a hug.

“I got so much stuff people give me,” Conard said. “I didn’t know I had so many friends.”

The group then sang “Happy birthday,” to Conard and applauded. Several people hugged him, thanking him for his service as he thanked them for their gesture.

Sue Fedor, his neighbor said, “I’m so happy that you had this honor presented to you. ...

Jim Fedor, the son of Conard’s neighbor Sue Fedor and an Army veteran, bent on his knee to shake Conard’s hand.

Fedor, a resident of Massillon, said, “You need anything, you ask because you and I are brothers.” Conard said he’s a native of Reedy, West Virginia, who relocated to Ohio after he graduated from high school and enlisted in the Army in 1942 as he likely would have been drafted. He said he served as an Army clerk and typist at Fort Sam Houston and from 1945 to 1946 in Belgium after it had been liberated from German occupation by the Allies. He was not directly involved in combat operations.

After the war, he spent some time in West Virginia before returning to Ohio, settling in Canton and working for the Pennsylvania Railroad for about six years. He was a plumber during much of his career.

A few weeks ago Sue Fedor, a member of the Blue Star Mothers group, heard Conard, who was her neighbor in Plain Township decades ago, was turning 100. She contacted Simmons to see what could be arranged to recognize his service.

Simmons contacted Congressman Gonzalez’s office and the Patriot Guard to see what more could be done.

Brenda Russell, the president of Blue Star Mothers Ohio Chapter 2, which is based in North Canton, said it is amazing to still have a 100-year-old World War II veteran.

“There aren’t many of them (World War II veterans) left. And we’re losing multiples of them everyday,” she said. “So it’s a real honor to be able to come out and honor him tonight.”

Blue Star Mothers on its website says it’s a group made up of “mothers, stepmothers, grandmothers, foster mothers and female legal guardians who have children serving in the military, guard or reserves, or children who are veterans.”

Sue Fedor says Conard, despite his age, still maintains his home, and continues to drive.

He was interviewed in a Repository article in December where he drove to a drive-thru Christmas celebration in Canton organized by his longtime union Local 94, Plumbers, Pipefitters and Service Techs.

Fedor recounted at age 16 being a neighbor of Conard and his wife in Plain Township on 34th Street NE near Middlebranch Avenue NE.

“She was a good woman,” Conard said about his spouse.

Fedor said, “Yes she was and she’s very proud of you. Even though she’s not here today. But she’s with you in spirit.”

Conard said, “I’ll be with her before long.”