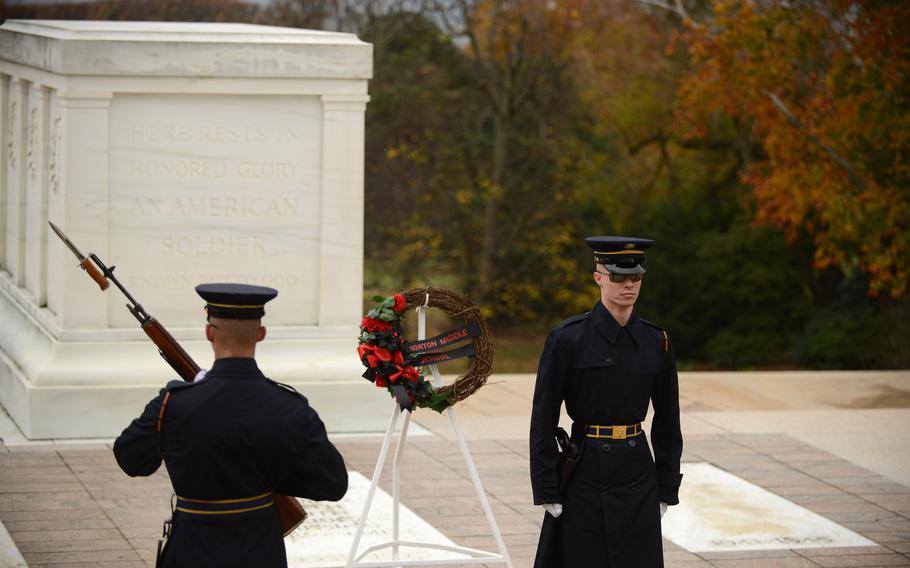 Honor guards patrol the Tomb of the Unknowns at Arlington National Cemetery in Arlington, Va., in 2018. (Astrid Riecken/The Washington Post)

WASHINGTON — When Arlington National Cemetery marks the 100th anniversary of the Tomb of the Unknowns next month, members of the public will be allowed to place flowers there for the first time, the cemetery said Tuesday.

"For the first time in nearly 100 years . . . as part of the . . . Centennial Commemoration, the public will be able to walk on the Tomb of the Unknowns Plaza and lay flowers," the cemetery said in a statement.

"This is a rare opportunity for the public to walk next to the Tomb . . . a privilege otherwise given only to the sentinels of the 3rd U.S. Infantry Regiment, 'The Old Guard,'" who stand watch over the site 24 hours a day, the cemetery said.

Registration is required. Those interested can register at Eventbrite. Attendees must have government-issued identification.

Visitors are encouraged to bring their own flowers, the cemetery said. But complimentary roses, daisies and sunflowers will be available.

The cemetery's trams will be available free of charge for the public to reach the Memorial Amphitheater, adjacent to the tomb.

The tomb was established Nov. 11, 1921, when the body of an unknown soldier who perished during World War I was brought from France and buried at the site.

Two additional crypts, for unknowns from World War II and the Korean War, were added in 1958, the cemetery states on its website. In 1984, an unknown from the war in Vietnam was interred at the Tomb.

But in 1998, the Vietnam remains were removed and identified as Air Force 1st Lt. Michael Joseph Blassie. They were reburied in Jefferson Barracks National Cemetery in St. Louis in 1999. The crypt remains empty.

An array of events is scheduled at the cemetery to mark the anniversary. "On Veterans Day, Nov. 11, the public will be invited to observe a joint full honors procession" and aircraft flyover, the cemetery said. More information is available at Arlington National Cemetery's website, arlingtoncemetery.mil/.