Ohio pilot, considered MIA since WWII, finally will be laid to rest in his hometown 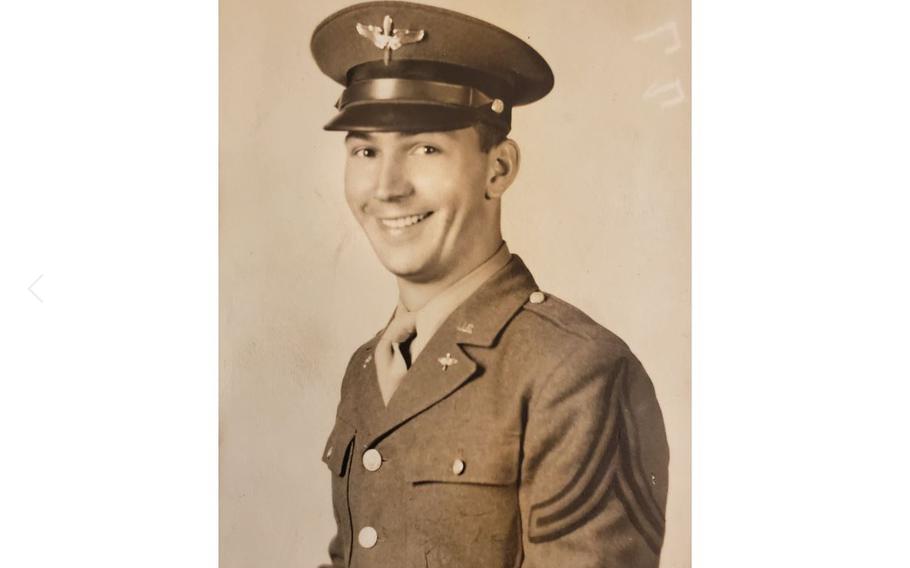 Steve Nagy was just 23 when he was killed in the summer of 1944. He was a member of the 407th Bombardment Wing and was piloting a B-17 Flying Fortress when it was hit by German anti-aircraft fire and crashed during a bombing run over Merseburg, Germany. (Defense POW/MIA Accounting Agency)

LORAIN, Ohio (Tribune News Service) — A 77-year-long journey home will end for one Lorain soldier this month when he is finally laid to rest in the soil of his hometown.

The remains of a Air Force pilot Steve Nagy, killed during a World War II bombing run over a German town, will receive a funeral, with full military honors, and be buried in the city’s Elmwood Cemetery on Friday, Sept. 24.

He was a member of the 407th Bombardment Wing and was piloting a B-17 Flying Fortress when it was hit by German anti-aircraft fire and crashed during a bombing run over Merseburg, Germany.

The plane carried nine crew members. Four were captured by German forces, while five — including Nagy — were killed. Nagy’s family was told his body had burned in the crash and could not be recovered, according to Nagy’s nephew, Richard Nagy, who was born two years after Steve’s death.

In fact, the soldier’s remains were mixed with those of another crewman’s and buried in Germany’s Leipzig-Lindenthal Cemetery. Here at home, Steve’s mother purchased a plot in Elmwood Cemetery — not far from the family home — and placed a stone “In Loving Memory” of her son so the family had a place to mourn him.

After the war, the American Graves Registration Command recovered three sets of remains from Nagy’s doomed flight from Lindenthal. Two could not be identified and were buried as “unknown American Service Members” in the American Battle Monuments Commission cemetery in Hombourg, Belgium.

Two years later, the Department of Defense brought the remains to the DPAA Laboratory in Kansas, and contacted the family to ask for DNA samples to test against the remains. Scientists used dental and Y-chromosome DNA from Nagy’s nephews to identify him in September 2019.

“The military is constantly looking for missing soldiers, and when we were called and asked if we would be willing to give DNA samples, it was exciting, but at the same time, I never believed that we could find him and bring him home,” said Richard Nagy. “But all of a sudden, we got the call to tell us that they had identified him.”

Representatives of the military visited Richard weeks later to present the family with the medals his uncle had earned during his service, as well as to make arrangements for Steve to be buried in his hometown.

“Since it was near the holidays, winter weather had already begun to set in in Northeast Ohio, and several family members would need to travel, we planned a funeral for Mother’s Day weekend 2020,” Richard explained.

“We wanted as many family members to be there for the burial as possible,” Richard explained. “He was the only one of four brothers who didn’t make it home from the war. My parents had died, all of his brothers are gone, as well as the woman he married shortly before leaving for Europe, but we wanted him to know he still had family who knew about him and loved him and wanted him home.”

But Steve Nagy’s return to his hometown was delayed again – this time by COVID-19.

“We couldn’t get together as a family because of the virus and because we wanted to give my uncle the funeral he has long-deserved, we had to put things on hold, again,” Richard said. “It was just so disappointing.”

The family will finally assemble to bury Steve Nagy in Lorain’s Elmwood Cemetery next week. A private family service will be conducted by an Army chaplain at the Gluvna-Shimo-Hromada Funeral Home at 10 a.m.

The procession’s planned route will take Nagy past his home, down Broadway Avenue, past Clearview High School, where he – and his nephews — graduated from, before turning into Elmwood Cemetery, where he will finally be laid to rest in a section of the cemetery dedicated to veterans of America’s wars.

“It would be a real honor to my uncle if folks wanted to come out and line the streets as he passed by. This is a small town. We all went to a small high school where it is more of a family than a school community,” Richard Nagy said. “I think he would like to know that people at home were proud of him and what he did in the war.”

Nagy will be buried — not in the empty grave his mother purchased but in a portion of the city-owned cemetery set aside for veterans, because the family feels “he served honorably and deserves to be with other men who made the ultimate sacrifice.”

The memorial grave and headstone will remain.

Nagy’s name, recorded on the Tablets of the Missing at the Henri-Chapelle American Cemetery, in Hombourg, Belgium, will now have a rosette placed next to his name to indicate he has been accounted for.

“It’s been a long, long journey for him, and an emotional time for my family,” Richard Nagy said. “We honestly never thought this time would come and we are just so thankful to everyone who worked so hard to make this happen.

“It brings closure to finally have him close again, and he will rest easier knowing he is finally home.”