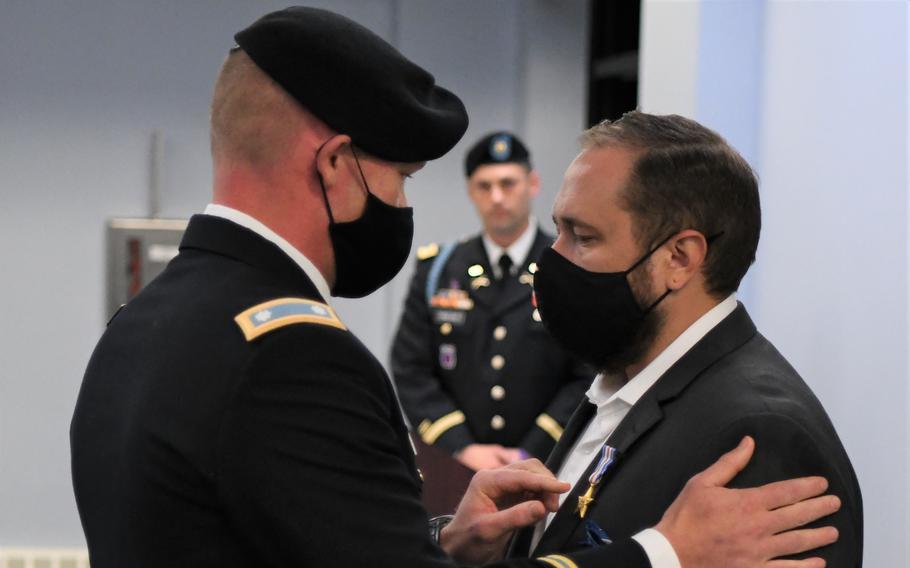 The war in Afghanistan wasn’t even half over when Adam Holroyd earned his Silver Star.

But it would not be pinned on his chest until more than a decade later — after the enemy he fought, the Taliban, had already retaken the country.

Holroyd pulled a special operations medic to safety during a firefight in a remote corner of Nuristan province 12 years ago, then he battled a fire in an outhouse that held dozens of rocket-propelled grenades. Later, he climbed into the smoldering shack to pull out the RPG rounds, crate by crate.

The 10th Mountain Division veteran was finally presented the country’s third-highest award for those actions Wednesday in a ceremony at Fort Drum, N.Y., two days after the U.S. withdrew its last troops from Afghanistan. The ceremony culminated an 11-year push, plus a year of delay after the medal was misplaced.

Yet nearly a decade earlier, a SEAL who had been on a shadowy mission with the CIA when he helped Holroyd quench the fire and remove the RPGs was quietly awarded a Navy Cross. It’s one step down from a Medal of Honor. 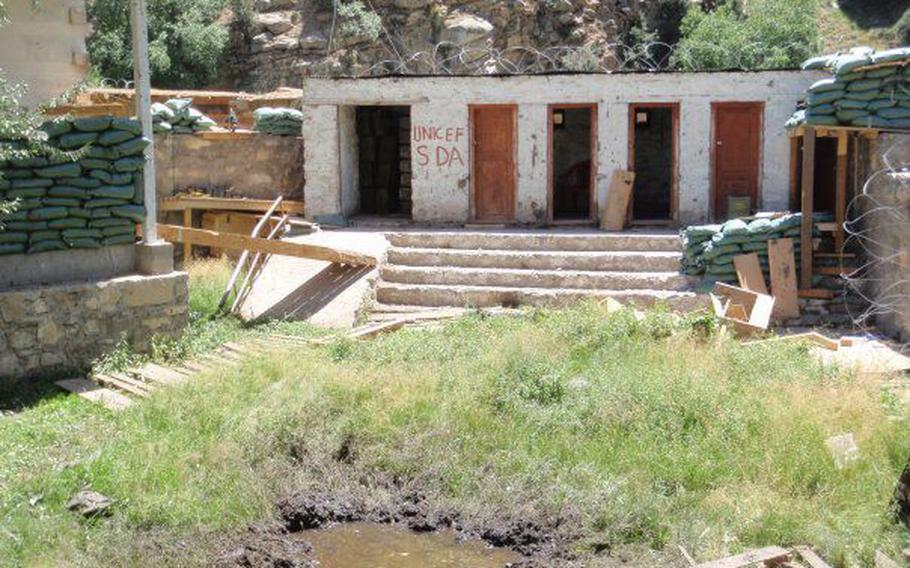 An outbuilding at ''the girls' schoolhouse' in the district center of Barg-e Matal in the northeastern Afghan province of Nuristan. The building served as an ammunition supply point housing hundreds of rocket-propelled grenades and other ammo for use by Afghan security forces and was later hit by an RPG that set fire to the stockpile during an attack in early August 2009 where Adam Holroyd earned a Silver Star for suppressing both the flames and the attack. (Adam Holroyd)

“I’m pretty sure we could have gotten more than a Silver Star … but we had to get something,” said a senior Army noncommissioned officer who drove the effort to get Holroyd’s medal but who asked not to be named in order to discuss the matter.

Stars and Stripes is not identifying the sailor, though his name has previously been disclosed in other published sources, including military promotion board results linking him to SEAL Team 6.

A redacted version of the Navy Cross citation was included in a 2016 USA Today report on secret medals, but Holroyd’s actions had been largely unknown before this week’s ceremony.

Had he not risked his life on repeated trips to smother the burning stockpile of RPGs, a resulting blast could have been deadly and likely would have deprived dozens of soldiers of a schoolhouse that was protecting them from well-disciplined enemy snipers, the senior NCO said.

“What Adam did, not only did it save lives, but it saved the mission,” he said. 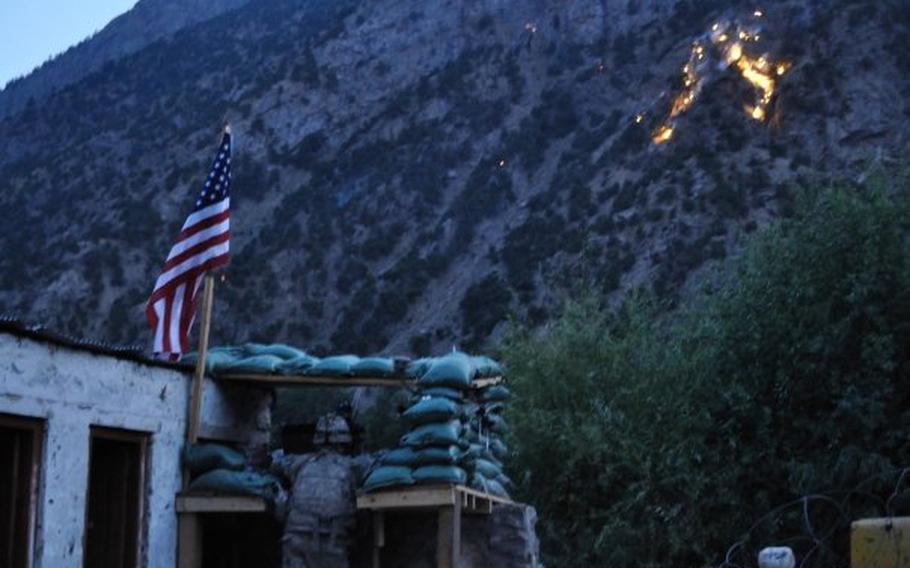 Adam Holroyd looks on as ordnance explodes on a hillside overlooking the Afghan village of Barg-e Matal in the northeastern province of Nuristan in the summer of 2009. An outbuilding that housed hundreds of rocket-propelled grenades and other ammunition, which was later hit by an RPG during an attack, is on the left. (Adam Holroyd)

Holroyd’s actions in the firefight came about a month into a mission to liberate Barg-e Matal district, a remote mountain village that was a vacation spot for Kabul’s elite.

A task force of some 220 U.S. and Afghan troops — most from 1st Battalion, 32nd Infantry Regiment — were sent to secure the district center on a long-range air assault in July 2009. The mission was known as Operation Mountain Fire.

It was largely political, requested by Afghanistan's president at the time, Hamid Karzai, to secure polling places ahead of August elections, said Jason Dempsey, a retired lieutenant colonel who had previously served with 1-32. Clearing it was supposed to take three days but ended up taking about 70.

Though the district center was a meaningless objective, Mountain Fire “put an incredible load on 1-32,” Dempsey said. 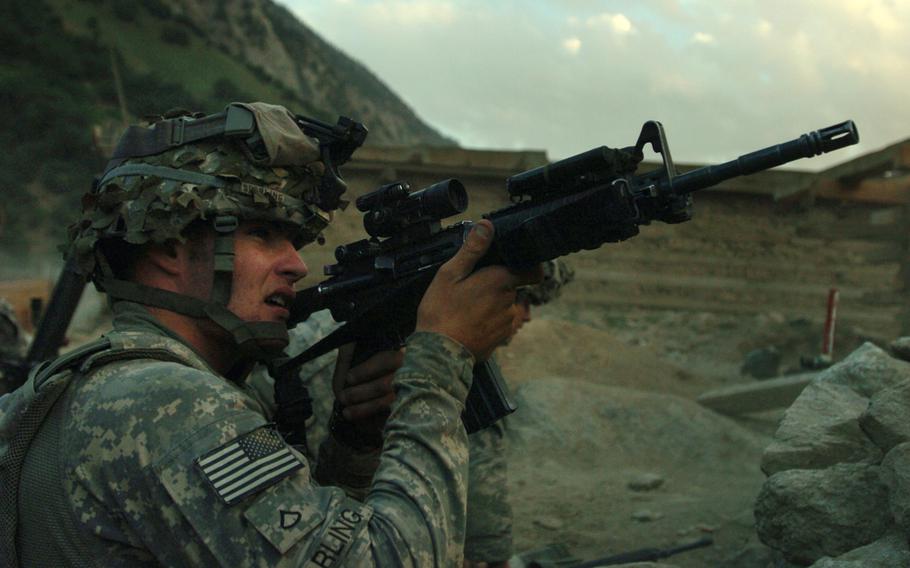 The assault force landed without a fight in cornfields outside town, in the shadows of high mountain peaks of the Hindu Kush, said Maj. Michael Harrison, former commander of Attack Company, 1-32.

Fleeing villagers avoided eye contact, an ominous sign, and within hours the enemy launched an ambush from the hills on all sides. An RPG blast mortally wounded Staff Sgt. Eric Lindstrom.

The Americans then dug in for a grueling battle, Harrison said in a phone interview. What followed was over two months of fighting from mud-and-timber huts and in the surrounding mountains to allow police and district leaders to return.

For the senior NCO, a squad leader on the mission, it was the heaviest fighting he saw in his 30 months in the country. 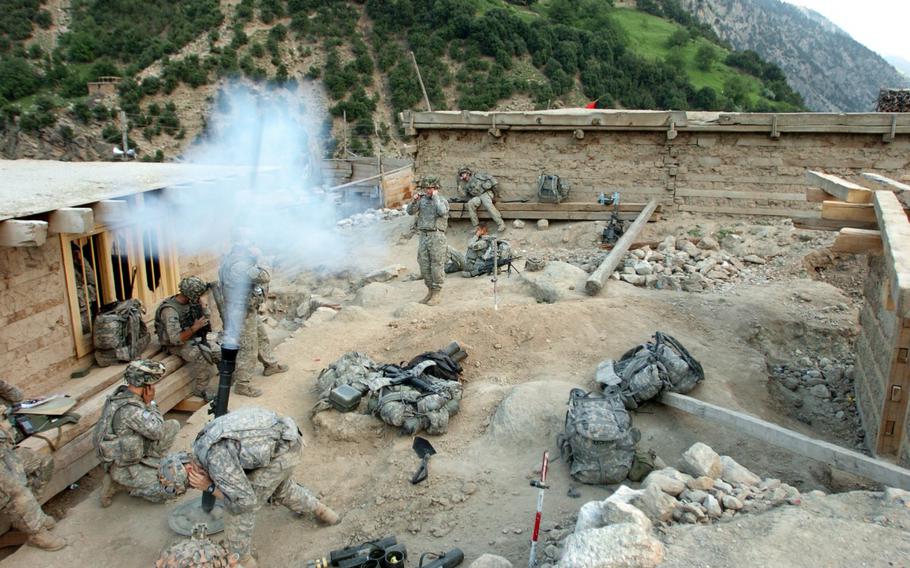 Holroyd and others declined to discuss the SEAL's mission, but it seems to have been as part of a covert Joint Special Operations Command and CIA “omega team” hunting terrorists, which was mentioned in chapters of Bing West’s book “The Wrong War.” The book also recounted 1-32’s mission there.

"The CIA believed that Lashkar-e-Taiba was dug in up in Barg-e Matal” and that al-Qaida members were using the nearby pass into Pakistan, said Wesley Morgan, author of “The Hardest Place,” a recent book about the war in northeastern Afghanistan.

By 2009, the agency couldn’t just drive up to Nuristan, even with an omega team, he said. They had to fly and piggyback onto larger infantry operations for security and cover.

A week after the battalion finally left in late September, insurgents assaulted the nearest U.S. outpost to its south, Combat Outpost Keating. The U.S. withdrew from there shortly thereafter. 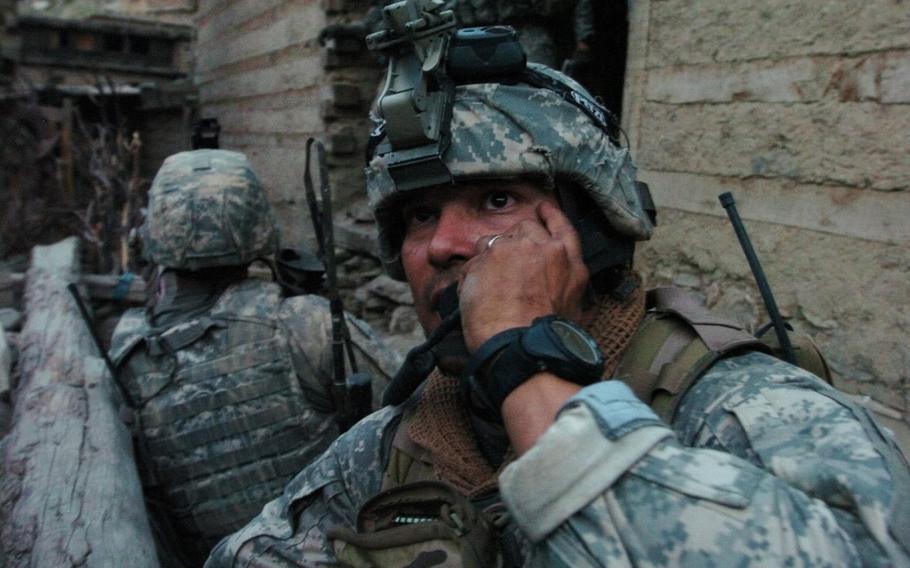 Attack on ‘the girls’ schoolhouse’

In 2008, insurgents had overrun another outpost in Nuristan, at Wanat, in what was one of the bloodiest incidents for the U.S. in the 20-year war.

Though the attack on COP Keating hadn’t yet occurred when Holroyd's unit came under assault, the senior NCO had an ominous premonition of an outcome similar to those two routs.

“That’s what I pictured was about to happen” in Barg-e Matal, he said.

Holroyd’s heroics came on Aug. 10, 2009, in response to an attack on the battalion headquarters element at what was dubbed “the girls’ schoolhouse.”

Early on, a sniper’s bullet hit a joint task force medic, breaking his arm and throwing him to the ground. Both Holroyd and the SEAL braved enemy fire to drag him to cover, their citations state.

Minutes later, a burning RPG hit a commode building that served as an ammo supply point and housed hundreds of RPG rounds. A blast could have set them off, but the cache didn't explode.

“We should have all bought a lottery ticket that day,” the senior NCO said.

The roughly 50 soldiers were ordered to evacuate, but Holroyd didn’t hear that command, he said. Annoyed at the prospect of digging in elsewhere, he chose to fight the flames.

“There’s fear there, but there’s also the very practical,” he said. “I didn’t want to move all my stuff.” 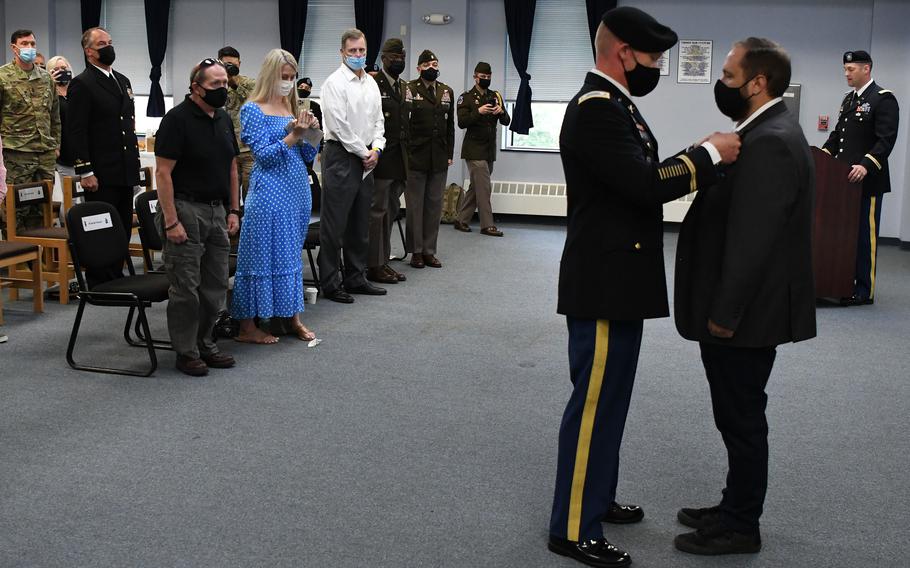 As the attack raged, he sprinted back and forth between the burning weapons cache and a small, twisted-up hose, filling a bucket and emptying it on the flames. Sgt. Sam Alibrando helped and would earn a Bronze Star with Valor for his efforts, the senior NCO said.

Soon the SEAL joined in, managing to untangle the hose and giving their efforts a needed boost, recalled Holroyd, who between bucket runs manned a machine gun to suppress the attack.

Once the rocket cache was saturated, the men soon found that several RPGs were out of their cases and hot, dangerously close to exploding, awards records state.

That’s when Holroyd volunteered to go into the building and pass the cases out to the others. The SEAL made several trips to throw them over the compound’s wall, his citation states, and with his bare hands he removed the smoldering RPG warhead that ignited the conflagration.

Then the sailor went outside the compound, making several trips under fire to toss the ordnance into the river. Their actions allowed the other troops to return to their positions and repel the assault, records state.

That wouldn't have been possible without Holroyd.

“What he initiated ended up saving everything,” the senior NCO said. “Lots of people are alive because of him and they probably don’t realize it.”

‘We did things that were very dangerous … and they weren’t recognized.’

Soon after the attack, Holroyd was chewed out for not evacuating the schoolhouse, he said, but the sailors wanted to put him in for an award.

The senior NCO submitted him for the Silver Star with the Army. The recommendation was approved at the brigade level before the paperwork “just disappeared,” Holroyd said. He learned of the nomination only after he’d left the service.

It’s not clear when the SEAL got the Navy Cross — an official cited security concerns in response to a query — but an unredacted citation was published online in a government document apparently created in 2011.

At some point, Holroyd met with a senator’s aide about an inquiry into his own missing award, but that went nowhere, he said in July.

A co-founder of Spiritus Systems, a tactical gear company popular with special operations troops, Holroyd said he just let the matter go after that. It wasn’t about the award, he said, but frustration over 1-32's relative lack of honors.

“We did things that were very dangerous,” he said. “And they weren’t recognized.”

The battalion received a Valorous Unit Award in 2010 for Mountain Fire. But Holroyd believed that many of its soldiers, particularly the junior enlisted ones, didn't get their deserved individual recognition, he said in July.

He said he planned to dedicate his Silver Star to them.

“This award is and has always been larger than just me,” he was quoted in an Army statement as saying at Wednesday’s ceremony.

Many people helped ultimately shepherd the award nomination through the system, said the senior NCO.

In 2019, U.S. Rep. Elise Stefanik, a Republican whose district in New York includes Fort Drum, wrote a letter to the Army secretary requesting Holroyd be awarded the medal.

Later that year, the awards packet got final endorsements from military officers, and then-Army Secretary Ryan McCarthy signed the citation in May 2020. Holroyd said he also received a letter from a general apologizing for the delay.

It’s still not clear what held up the awards process, but the senior NCO said he never gave up on it because the thought of not doing so drove him “absolutely crazy.”

The medal honors the blood, sweat and tears Holroyd gave while doing what was asked of him, the senior NCO said. He still hopes an upgrade to a higher award is possible.

“This was absolutely the least I could do” to say thanks, he said. “Sometimes words don’t do it.”