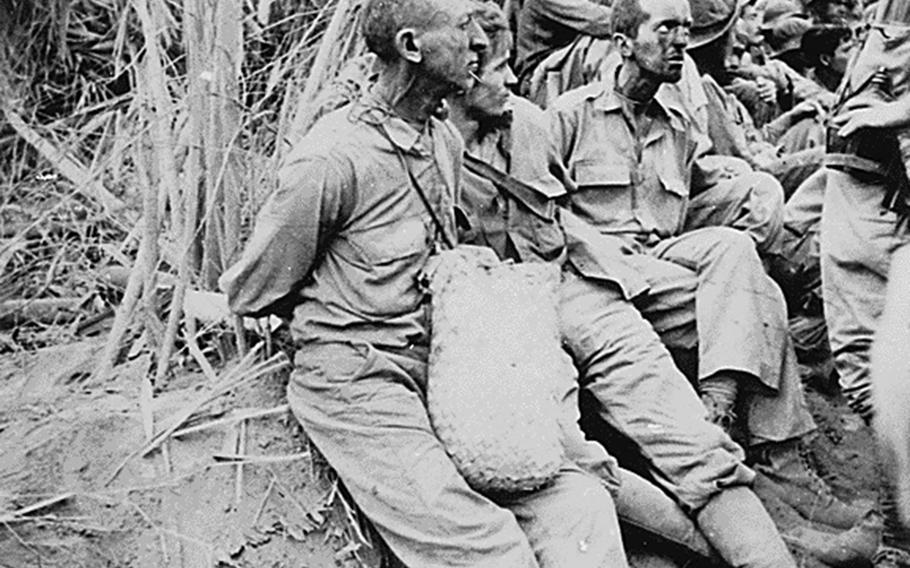 ALBUQUERQUE, N.M. (Tribune News Service) — It was William Clayton Overmier's carpentry skills that spared him the same fate as those forced on the Bataan Death March.

Serving with the National Guard in the Philippines during World War II, he was captured on the island of Corregidor in May 1942. Instead of having to march cross-country to a prisoner of war camp, his captors, upon learning that he had training as a carpenter, immediately shipped him off to Yokohama, Japan, to work in a shipyard.

An estimated 75,000 American and allied Filipino soldiers were marched for days across the Bataan Peninsula on what became known as the Bataan Death March. Thousands of them died en route from the heat or after being beaten, bayonetted or shot for falling behind.

While Overmier did not suffer that fate, neither did he have it easy, said his son, Alan Overmier.

"My dad spent three and a half years in a Japanese prison camp, working in a shipyard and in coal mines," he said. "They worked the prisoners for 10 days and gave them the 11th day off to clean their clothes and take a bath in a big tub in which everybody used the same water." His diet consisted mostly of "a handful of rice each day."

An injury while he was a POW earned Overmier a Purple Heart.

Overmier was born on Valentine's Day 1920 in the farming community of Mosquito Township, Ill. His father, a building contractor, moved the family to Albuquerque when Overmier was 8 because a family member had contracted tuberculosis and Albuquerque's sunshine, high altitude and warm, dry climate was regarded as healing.

After graduating from Albuquerque High School, Overmier joined the 111th Cavalry Regiment of the New Mexico National Guard. He was assigned to the 200th Coast Artillery at Fort Stotsenberg near Clark Field in the Philippines, when the Japanese attacked on Dec. 8, 1941, one day after the attack on Pearl Harbor in Hawaii.

U.S. and allied Filipino forces held out until April 9, 1942, when they were forced to surrender. Overmier, who had switched locations to the nearby island of Corregidor, was captured on May 8, 1942, and immediately sent to Japan.

After the war, Overmier returned to Albuquerque and attended the University of New Mexico, earning a degree in civil engineering and becoming a building contractor like his father before him.

"He built commercial buildings and residential buildings, including some of the first VA houses in Albuquerque — if not the first," said son Alan.

It was during those post-war years that Overmier met Anna Lee, the woman who would become his wife. "My mom had moved up here from Lovington and was going to business school when she was set up on a blind date with him," Alan said. The couple had five children and were married 73 years at the time of Overmier's death.

Alan Overmier said that his father was a good and decent man, but "very strict and very stoic," not a particularly religious man nor predisposed toward displays of affection. Perhaps influenced by his war experiences, a more apt word to describe him was "survivor," he said.

He was buried with full military honors at Sunset Memorial Park.