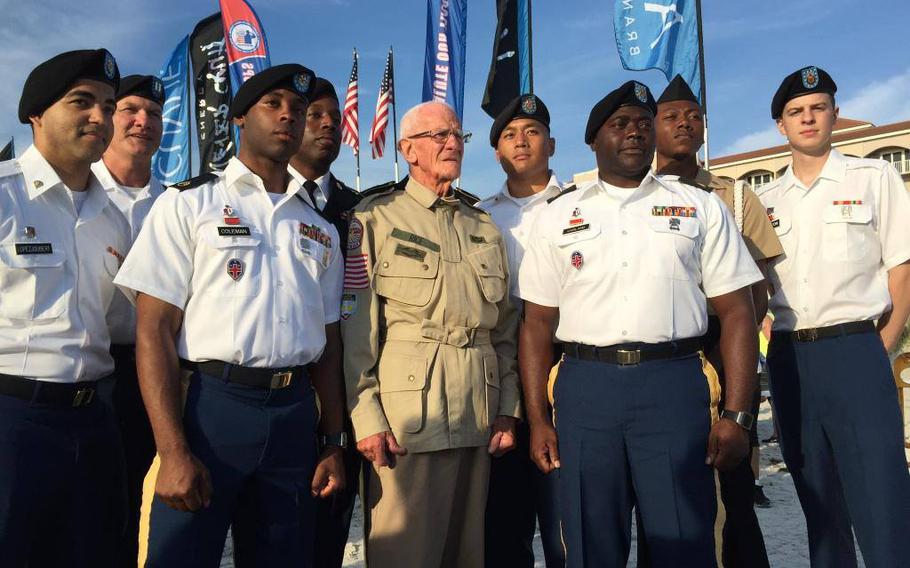 SAN DIEGO (Tribune News Service) — What better way to celebrate a 100th birthday than on the beach in front of the Hotel del Coronado — even if you jump out of a plane to get there.

That's exactly what lifelong Coronado resident Tom Rice is planning to do this Sunday.

He gives two major reasons: First, because he is one of the few remaining 101st Airborne Division World War II Army paratroopers and wants to commemorate lives lost during the Normandy invasion that signaled an end to Nazi occupation of northwestern Europe.

Second, he wants to do it because he still can.

That fateful day in France, Rice was taking a leap of faith in the dark of night carrying 137 pounds of gear and dodging enemy flak and patrols.

On Aug. 15, 2021, his actual birthday, Rice is jumping between 11:30 a.m. and noon in sunny San Diego. This time, he will be greeted by an army of media, supporters, his wife and four of his five adult children. The only shooting will be by videographers and photographers.

"I think we'll be low enough to fall free for 2,000 feet and then open up our parachutes and make a judgment about where we're going to land in front of the Hotel Del," Rice said. He is hopeful there will be little wind to blow them off-course (9 mph winds are forecast).

As a soon-to-be centenarian, Rice is remarkably sharp and harbors a clear recollection of the history-making events of 77 years ago when he was a member of the 501st Parachute Infantry Regiment of the 101st Airborne Division.

The paratroopers carried clickers that sounded like crickets. To meet upon landing and avoid an undesired rendezvous with an enemy soldier, they clicked to communicate.

"We'd click once and listen," he said. A comrade clicked in response. The number of cricket clicks exchanged increased as they moved closer to each other.

The paratroopers had memorized three code words — flash, thunder and welcome — to identify each other from enemies masquerading as Allied soldiers.

"This jump is in honor of all the fellows who, for the most part, never got to go home," Rice said. "It's an acknowledgment that they exist vicariously in our minds."

As one of the few remaining 101st Airborne D-Day operation participants, he added, "I'm carrying the weight of the entire division on my shoulders."

As he did over Normandy in June 2019 for the 75th anniversary of D-Day, Rice is jumping in tandem with Art Shaffer, who operates a skydive training center in Florida. They'll repeat their tandem jump from a restored C-53D plane, called the D-Day Doll, that took part in the Allied liberation of France.

Is he fearful? "We're used to it," Rice said. "There's a little anxiety, but I've got a good master jumper with me. ... We know what's going on and why, and we anticipate what's happening ahead of us and have that in mind so we don't get into trouble."

In contrast to his suspenseful and tricky landing in France, Rice downplayed this one: "I'm skidding in on my butt in the sand."

His wife, Brenda Carlson Rice, said she'll be there to catch him: "He's in good hands."

Rice has been training in the gym two days a week and said he spends a third day doing push-ups and other exercises.

Referred to as Coronado's hometown hero, Rice still lives in the 900 square-foot house his father built more than a century ago.

Following the Normandy invasion, he went on to take part in the Battle of the Bulge in Bastogne, Belgium, and the Allied invasion of the Nazi compound near Berchtesgaden, Germany, overlooked by Hitler's "Eagle's Nest" chalet.

After his military service, he taught history and coached cross-country and track and field for 44 years, first at Chula Vista High School from 1950 to 1960, then in 1961 moving to the district's newly opened Hilltop High.

Rice said he was the last 101st Airborne veteran to jump in Normandy during the 75th anniversary multi-day event.

In a repeat of 1944, they landed near the French town of Carentan, where Rice is now an honorary citizen. The Carentan mayor was the first to greet Rice when he touched down in 2019, giving the veteran paratrooper a welcome hug.

"We flew home and then came back to jump again in Holland," Rice said. The second commemorative drop was Sept. 19, 2019, over Eindhoven in the Netherlands in memory of Operation Market Garden, an Allied airborne operation that stretched from Sept. 17-25, 1944.

A number of dignitaries will be at the Hotel Del drop zone on Sunday, but the couple's French acquaintances won't be among them. "None of our friends can come because of the pandemic," Brenda says.

Rice will have on the honorary dog tags he wore during his tandem jump over France in 2019, plus a new dog tag celebrating his 100 years of life. He'll wear the commemorative Army uniform and boots issued to him when he returned to Normandy to skydive for the 50th anniversary festivities.

The Hotel Del's culinary chef has prepared a special birthday cake to celebrate. But the day doesn't end there. In the evening, he'll be guest of honor at the 6 p.m. Sunday promenade concert in Spreckels Park, arriving in a World War II Jeep.

He is intent on returning to Carentan to repeat his jump there for D-Day's 79th anniversary celebration in June 2023. That way, he'll represent the 101st Airborne at age 101.