He's still got it: 90-year-old Army veteran parachutes from plane on his birthday 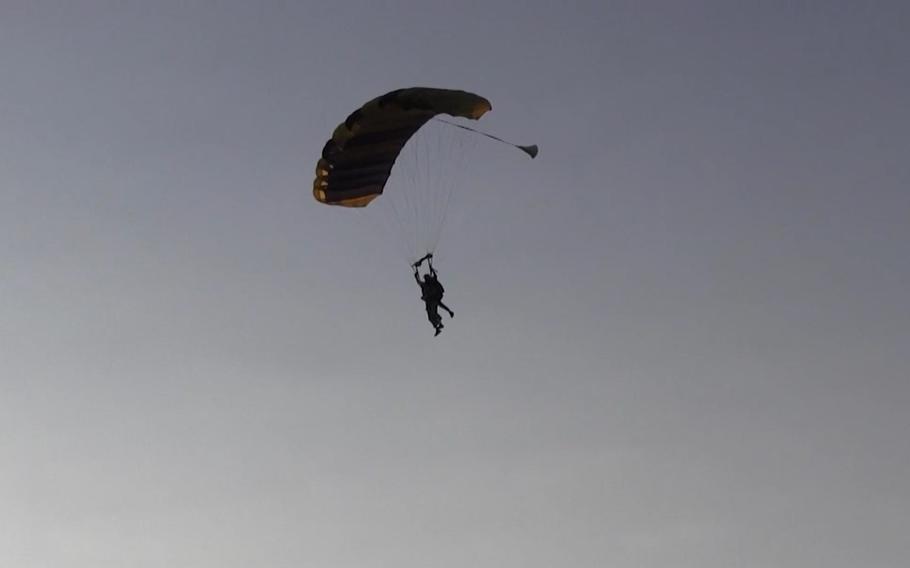 ASHLAND, Ohio (Tribune News Service) — As the sun was starting to go down Saturday evening, a group of people suited up with harnesses and gear as an instructor from the skydiving center AerOhio explained what they would be doing after they jumped out of the plane.

With every motion the instructor made, there was one participant who was listening intently and mimicking his movements. The participant was Bob Schneider, a retired Green Beret and jumpmaster, who was about to jump out of an airplane for his 90th birthday.

The last jump Bob Schneider made was roughly 30 years ago when he was in the Army Reserves and serving as a jumpmaster, but he returned to the skies for his 90th birthday for yet another jump.

Bob’s daughter, Tammy Jackson, said her brother Andy Schneider was the one who came up with the idea for the jump. Jackson even told her brother ‘If you jump, I jump,’ so they both signed up to do a tandem jump the same day as their dad.

Andy said he wanted to sign his dad up for a jump to bring back memories of when the two of them were static line jumpers in the U.S. Army. While Andy made about 55 jumps, Bob said he made over 200 static line jumps throughout his career and never broke any bones.

Before becoming a jumpmaster, Bob worked as a surveyor in the Army after he got out of high school, but he said he always wanted to learn how to be a jumper.

“When we (he and his wife) came to Ohio, a fellow talked me into going into the reserves,” Bob said. “... I heard they were starting a special forces unit up in Mansfield, Ohio. So, I transferred into that (unit) and they sent me down to Fort Benning, Ga., to Airborne School.”

After completing Army Airborne School and “getting his wings” as a jumper, Bob stayed in the Army Reserves for 37 years. Over the decades, Andy said Bob earned the title of jumpmaster, sergeant major and was even named a member of the U.S. Army Special Forces.

Bob said he had his fair share of difficult jumps over the years, including one of the last jumps he did where he got his foot caught in his suspension line as he exited the plane. After fighting with the line and breaking free, Bob hoped nothing like that would happen during his birthday jump.

Andy said they surprised Bob with the gift a few weeks ago and he didn’t seem very excited at first. But as the day got closer and closer, Andy said his dad started to call him more and that he was very excited about the jump in the days leading up to it.

On the day of the jump Bob and his fellow jumpers were joined by friends and family members, some coming as far away as Orlando, Florida, to watch them all. Among the on lookers was Bob’s wife, Dorothy, and several people from Belmont Towers at the Brethren Care Village, a Christian based senior living community, they live at in Ashland.

They arrived around 6 p.m. to get all suited up in their harnesses and gear before flying up between 10,000 and 13,000 feet in the air sometime after 7:30 p.m., making them the second to last jump of the night. Once they were over the jump zone near the Ashland County Airport, Bob and his instructor exited the plane and then were followed by his fellow jumpers one by one.

Each jumper then entered a minute-long freefall before the parachutes were pulled as they glided down for the rest of the five-minute flight. Everyone who was gathered to watch the jumpers began to cheer as each one slowly descended to the ground, cheering the loudest was Bob, the last jumper to land and set his feet on the ground.

As soon as Bob landed, he walked over to his wife who was holding onto his U.S. Army Special Forces hat. He put the hat on, leaned down and spoke with her before sharing with the crowd that his body was very sore.

With the crowd dispersing as people went to their cars and caretakers helped members of the Brethren Care Village get back on their bus, Bob and a few family members shared some champagne as one last celebration of his birthday.

Bob, the man who had just completed his first jump out of an airplane in roughly 30 years, had turned 90 years old.