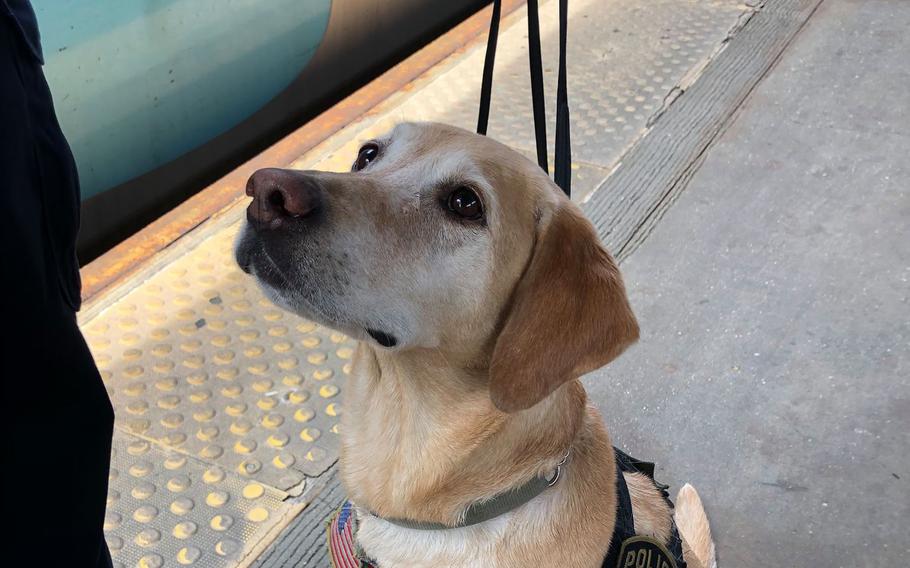 Summer trained with the 1st Battalion, 7th Marines at Twentynine Palms in California. She went on to deploy to Iraq and Afghanistan, where she survived firefights, sniffed out improvised explosive devices and saved countless lives. (Amtrak Facebook)

MOUNT AIRY, Md. (Tribune News Service) — When Micah Jones went to Dulles International Airport to pick up his new coworker at midnight about seven years ago, he didn't know much about her.

He knew her name was Summer and that she'd be helping him search for explosives for the Amtrak Police Department. And he knew she was a yellow Labrador. That was about it.

When they met, Jones started looking through her records to learn more about her past. He realized, like him, she'd served in the military — and she happened to retire on his birthday. Summer trained with the 1st Battalion, 7th Marines at Twentynine Palms in California. She went on to deploy to Iraq and Afghanistan, where she survived firefights, sniffed out improvised explosive devices and saved countless lives, according to Jones.

Jones, a retired master sergeant of the U.S. Air Force with 21 years of service, also served in Iraq and Afghanistan. Part of his duties included training explosive detection dogs not so different from Summer. And like Summer, he experienced events overseas that stuck with him.

As 11-year-old Summer lives out her retirement with Jones and his working dog Bonnie in Mount Airy, the trainer is on a mission to make sure Summer gets the recognition she deserves.

"Being in the military, I know I'm the one that gets the ribbons, I get all the credit," Jones said at his home Monday. "But that dog's the one who finds explosives. ... I'm not on my hands and knees finding explosives, they are."

Summer was recently named the nation's "Military Dog of the Year" in the 2021 American Humane Hero Dog Awards, after being nominated by Jones. The win puts her in the running along with six other canines for the contest's top title of American Hero Dog, according to a news release. The finalists came from a field of more than 400 nominees, and voting is underway for the highest honor at herodogawards.org. Anyone can vote once a day until 3 p.m. Sept. 7.

When Jones found out Summer won the military dog category, he was ecstatic. When he got home late from work, he made her a vanilla ice cream and dog treat sundae.

"It's an honor to work along a war dog, let alone one that took the military category," he said.

A shelf in Jones' home office holds a large shadow box filled with Summer's medals and military ribbon rack. Her service vest is still covered in bits of yellow fur.

Though Jones holds these items dear, Summer doesn't pay them any mind. She's happiest following Jones around, playing with Bonnie or swimming in their backyard pool.

On a sunny afternoon, Bonnie and Summer leapt into the pool in pursuit of squeaky toys. Their tails wagged and ears flopped with each splash.

Though Summer comes across as a typical, playful dog at home, Jones said she struggles with canine post-traumatic stress disorder.

Loud noises such as fireworks and thunderstorms cause her to shake, he said.

Jones can relate to a certain extent. After he got back from the desert, the sound of hissing trains wasn't pleasant on his ears.

"She deals with it, I deal with it. ... We kind of help each other out," Jones said of Summer. "I think the Lord brought us together."