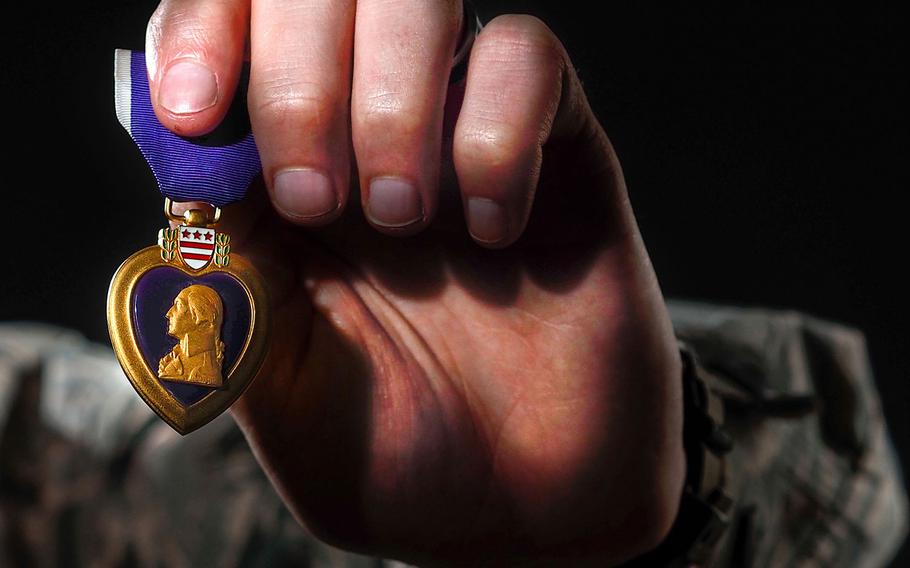 Air Force Staff Sgt. Christopher Wiedmer, a vehicle operator assigned to the 773d Logistics Readiness Squadron at Joint Base Elmendorf-Richardson, Alaska, poses for a portrait, Wednesday, Oct. 5, 2016. Wiedmer received the Purple Heart after he was wounded by an improvised explosive device, and suffered a traumatic brain injury and severe burns, in Iraq during his 2011 deployment in support of Operation New Dawn while serving as a lead vehicle commander with the 424th Medium Truck Detachment. (Justin Connaher/U.S. Air Force)

WASHINGTON (Tribune News Service) — Congressman Brian Higgins (NY-26) announced introduction of H.R. 4765, the Purple Heart Flag Act last week. The bill honors the sacrifices made by members of the U.S. military by officially designating a Purple Heart Flag to be publicly displayed and flown at federal facilities on specific days.

"Flying the Purple Heart Flag would be a display of gratitude for the sacrifices made by brave American servicemembers and a regular reminder of the extraordinary price paid by those who have defended our freedom," Higgins said.

Specifically, the bill would honor service members presented with the Purple Heart medal by requiring the Purple Heart Flag be displayed across the nation at war memorials, national cemeteries, veterans' hospitals, and the Departments of Defense, State, and Veterans Affairs on days of importance including Armed Forces Day, Memorial Day, Flag Day, National POW/MIA Recognition Day, and Veterans Day.

The idea for the bill was brought to Higgins by Russell D. Ward, a Vietnam War veteran and the senior vice commander of Military Order of the Purple Heart Buffalo Chapter 187. The Purple Heart medal is presented to U.S. armed forces who have been wounded or killed as a direct result of enemy action and is the oldest badge still awarded by the U.S. military today.

National Purple Heart Day is commemorated on Aug. 7 each year. It was on Aug. 7 in 1782 that General George Washington created the Badge of Military Merit, a heart-shaped purple cloth featuring the word 'merit' which was the predecessor of today's Purple Heart medal.

Higgins said he works closely with local families and organizations to honor Western New York veterans. In 2015, Higgins worked with local veterans on a project adding the names of 280 local Vietnam Veterans killed in action to the National Purple Heart Hall of Honor. Over the last decade the Congressman has helped to deliver 1,950 military service medals to veterans and their families, including 68 Purple Heart medals.