A badge of honor, a salute to Purple Heart recipients 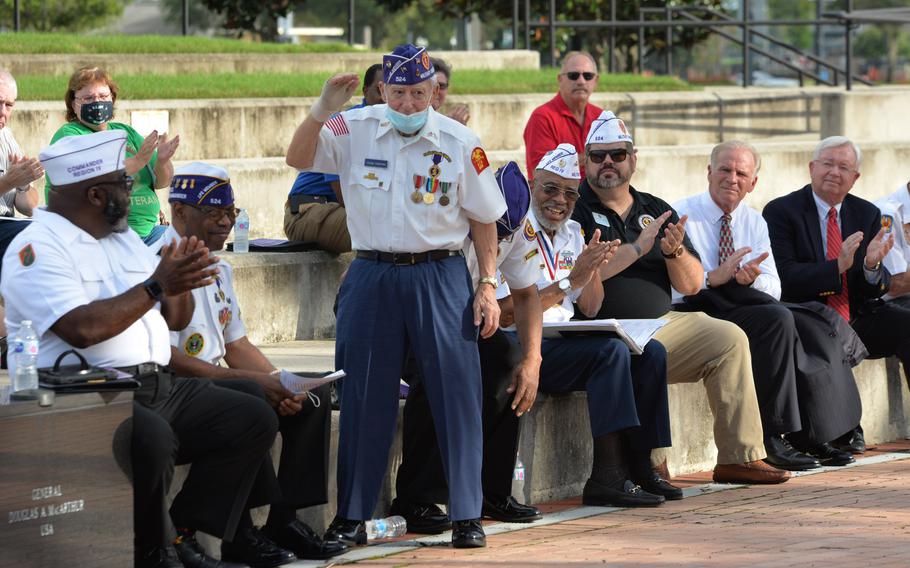 U.S. Navy and D-Day veteran Frank Purpura, 95, stands to be honored on Friday, Aug. 6, 2021, during a tribute to Purple Heart recipients. (Dede Smith/for The Times-Union)

(Tribune News Service) — Proud veterans wounded during their military service were the focus of attention and honor Friday as family members, comrades and the city of Jacksonville came out to Veterans Memorial Wall to salute them.

Hosted by the city’s Military Affairs and Veterans Department and the Military Order of the Purple Heart Chapter 524, the annual event recognizes Purple Heart recipients. From World War II to Vietnam, some of them spoke to the gathering about what a Purple Heart day means to them.

The military combat award is presented to service members who are wounded in combat and posthumously to next of kin in the name of those who are killed in action or die of wounds received in action. The original award, designated as the Badge of Military Merit, was established by then commander-in-chief of the Continental Army, George Washington, on Aug. 7, 1782.

Afterward many in attendance walked along the Purple Heart Trail, decorated by Navy Wives Daughters in Dixie, from the wall to the VyStar Veterans Memorial Arena.