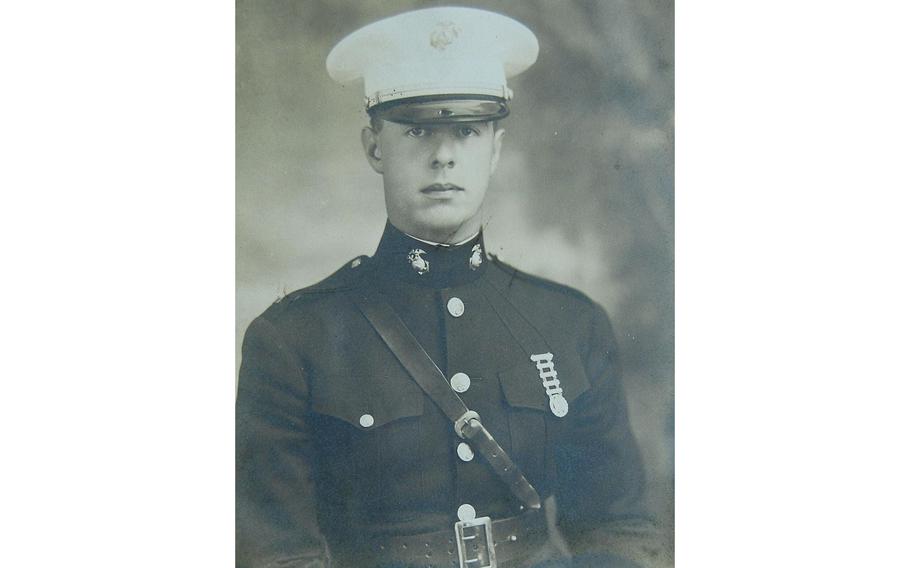 LEBANON, Tenn. (Tribune News Service) — Seventy-five years after Japan surrendered, a fallen World War II Marine is finally returning to Lebanon after it was discovered that the previous remains sent back to Wilson County had been misidentified.

Capt. Edward Glenn Walker Jr. was the son of a county judge who practically brought Lebanon into the 20th century through infrastructure projects and the building of schools. He was also a Harvard Law School student, but when war broke out, he enlisted in the Marine Corps to serve his country and was shipped off to the Pacific Theater.

County Commissioner and self-described historian Jerry McFarland told the story of Walker's life, tragically cut short on the island of Tarawa, during the commission's monthly meeting Monday. Tarawa is oft remembered for the devastating losses that befell American soldiers attempting an amphibious assault of the narrow atoll that held a strategically vital airfield.

The official number of troops killed, per the Marine Corps, was 1,009. Walker was one of the unfortunate members of this assault, who would not return from the atoll. According to McFarland, as was often the case in the war, deceased soldiers were buried where they took their last breath.

After the war, the US government set out to exhume these graves and send the remains back to their families stateside.

A couple of years later, remains that were believed to be Walker were returned to Lebanon and buried at Wilson County Memorial Gardens. However, thanks to modern technology, it was discovered that Walker's remains were actually buried in Hawaii. So now the remains of the soldier believed to be Walker will be exhumed from their resting place and returned to Hawaii with hopes of properly identifying who he was.

A nephew of Walker's, Lane Martin of Lebanon, said, "We're extremely happy that this has been resolved. It brings closure to something that happened to our family a long time ago."

Martin added, "It has initiated a family reunion almost for us. We're expecting 100 cousins and family members at the service this weekend."

Martin said he was overcome with emotion when the plane landed in Nashville carrying his Uncle Glenn. "Today was a powerful moment. To see Glenn finally coming home was special and the scene at the airport amazing."

Walker was killed in action before his nephew would be born, but Martin said that through stories from his mother and grandmother he learned about the exceptional man that his uncle was. "I just wish they were alive to see this," he said.

When the procession made its way onto Hartmann Drive, Martin said he almost had to let his wife take the wheel of the van he was driving because seeing the Lebanon Fire Department trucks and Lebanon Police who picked up the escort for the final leg of the route set in the realization that his uncle was finally home.

Martin has learned a lot about his uncle through letters written by the latter. He was surprised to learn that while attending Harvard Law School, Walker was classmates with Joe Kennedy, the older brother of President John F. Kennedy, who was killed in action in Europe during the war.

Walker's remains were flown from Dallas into Nashville airport, unloaded by military personnel and delivered by procession to Lebanon's Ligon & Bobo Funeral Home, where a short ceremony was held in his honor. Escorting the hearse that carried Walker from the airport were members of law enforcement but also over 150 veteran bikers who showed up to pay their respects.

One of these veterans, retired Chief Warrant Officer Paul Bosch, of the Combat Veteran's Association, said being a part of the procession was quite an honor, however, he said, "I was more honored that this many veterans from so many branches came out and realized what kind of soldier this man was back in 1943. The end result is no soldier wants to be left unaccounted for especially if it's in another country, so this means a lot to anybody that's been in the service, not to mention just the combat vets."

Another rider and Air Force veteran, Quake Spencer, of Gallatin, similarly said he was "honored to be able to escort a World War II veteran home" after so many years.

A service is scheduled to be held at Fairview Church, 1660 Leeville Pike, Lebanon, on Saturday at 3 p.m. Afterward, Walker will be taken to the Wilson County Memorial Gardens for a burial with full military honors.