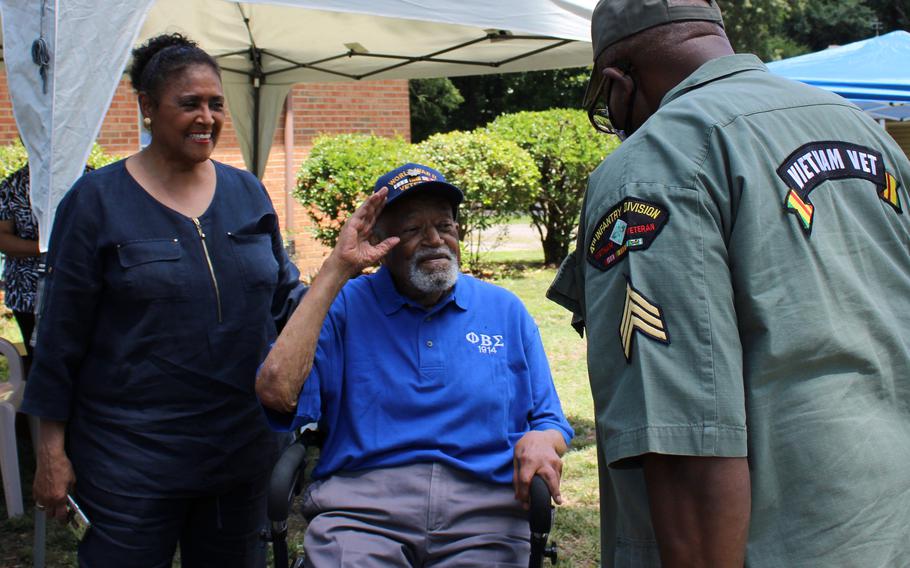 Martin who was told that he was going to a restaurant said, “I didn’t expect all this.”

Sheila Martin Brown, proud being Martin’s daughter, shared some words about her father.

“I have been inspired by his example of service to the community,” said Brown who resides with her dad. “He’s a wonderfully strong family man. He’s just always been a believer.”

Brown stated that her dad has raised more money from individuals locally than she did while serving as a councilmember in Atlanta.

“This is a special, special occasion,” said friend Starrie Jordan of Ettrick. “He’s been a model citizen for all of us in this community to follow. If I keep doing what he’s doing, maybe I can make it to 104.”

According to Jordan, Martin walks every morning.

“He has a lot of determination,” added Jordan. “I hope I inherited whatever Dad is made out of,” said Brown.

“He has meant so much to our community here as you can see by the turnout.” said neighbor and friend Anna Bradley who invited The Progress-Index to attend Martin’s celebration. “There are numerous groups here to honor him.”

Betty Berry who has known Martin since 1968 expressed how Martin and his late wife Mariah were like family and always good to her.

“He’s like a brother to me,” said Berry who gave Martin his first kiss of the day ... on the cheek. “I’ll be 89 in August; I’m the second oldest woman at our church.”

On behalf of the U.S. Army and the Vietnam Veterans who honor all of the WWII veterans, Sgt. Albert W. Cooks presented Martin with the following Army memorabilia: WWII medallion, face masks, WWII hat, and coffee mug.

A guest from the crowd shouted, “He likes black coffee ... no sugar, no cream.”

“We’re so proud that he’s here at 104,” said Cooks who saluted Martin. “Lieutenant Colonels ... guess what? In those days, he wasn’t respected, but I tell you one thing ... he’s getting the respect today.”

WHEREAS, Retired Lt. Col. Louis F. Martin was born on July 3, 1917, in Princess Anne on Maryland’s Eastern Shore, a fraternal twin, were the eldest of 12 siblings, six of whom have since passed away.

WHEREAS, the former Army logistician and Colonial Heights resident overcame tough life-changing obstacles like the lack of educational opportunities for African-Americans of the early 20th century, the Great Depression and the segregation of colored troops serving their country during World War II.

WHEREAS, in 1935, Lt. Col. Martin found his way into a five-year work-study program at his parents’ alma mater, Virginia’s Hampton Institute. Like his father, he chose agriculture — one of the few college majors available to black male students.

WHEREAS, in 1936, Lt. Col. Martin along with his brother Walter decided to transfer to a college near home so they could finish their education and make it possible for their younger siblings to have the same opportunity.

WHEREAS, on May 14, 1939 on the campus of Princess Anne College, in Princess Anne, Maryland, Lt. Col. Martin became a member of Phi Beta Sigma Fraternity, Inc., Alpha Mu Chapter.

WHEREAS, in March of 1941, at age 23, was drafted. It started a lineage of military service in his family. All five of his younger brothers eventually joined various branches of the armed forces. His twin sister Lourene completed a 22-year hitch as an Army nurse.

WHEREAS, his career spanned decades, taking him from military service to earning a Master’s degree, to marrying the love of his life where they were blessed to birth a lovely daughter.

“This is our oldest living member in the entire fraternity,” announced Chris Reyes.

Martin overcame tough life-changing obstacles like the lack of educational opportunities for African-Americans of the early 20th century, the Great Depression, and the segregation of colored troops serving their country during World War II.

However, it’s not those types of moments he chooses to dwell on. The spry centenarian focuses on the positive things he can do for his community. At 104, Martin continues to provide leadership in Chesterfield County as an election official.

“Negative thinking does not move you forward. I don’t feel like anybody owes me anything. Over my lifetime I took advantage of every opportunity I could. I worked hard, slept well, and ate and drank in moderation,” Martin stated to Lesley Atkinson with Fort Lee Public Affairs in a 2016 P-I story. “I followed my parents in their religious beliefs. My father built a cubicle under the step for his Bible study. He took the family to church and sang in the choir. He was a leader at home and in his profession. I can’t sing, but I never miss church or Bible study. I like to think I’m a reflection of my dad.”

After 29 years, Martin retired from the U.S. Army Reserves, and he was employed as an associate professor of horticulture and extension specialist at VSU until he retired in 1982.