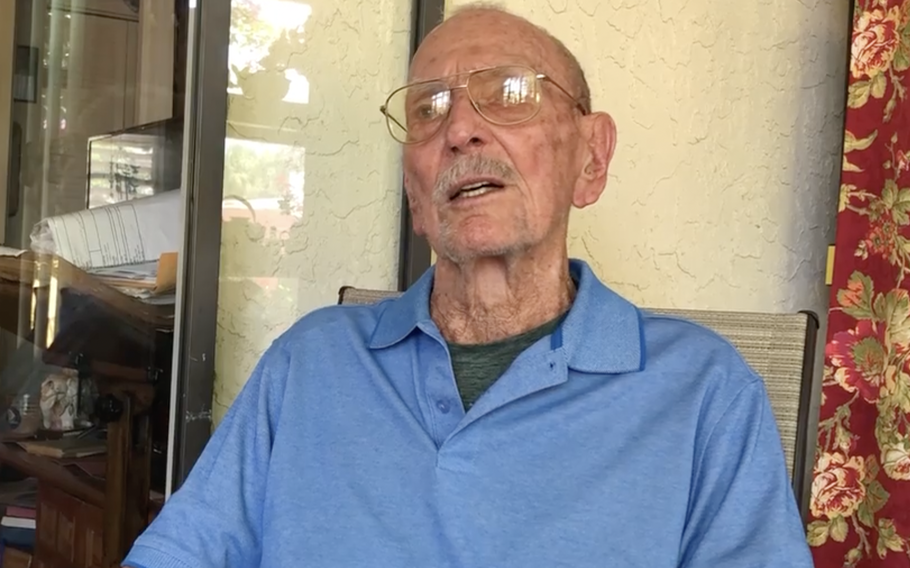 BRADENTON, Fla. (Tribune News Service) — During World War II, Paul R. Atherton survived a mine blast that sank his troop ship at Espiritu Santo in the Pacific. He was wounded by artillery fire at Anzio in Italy and again while crossing the Rhine River into Germany.

In the Vietnam War, a Viet Cong bombing of the Brinks Hotel in Saigon wounded him and about 60 others. Two Americans died in the blast.

Most recently, the retired Army colonel survived a bout of COVID-19 that floored him for about six weeks.

For someone who has had more than his share of brushes with death, Atherton, who turns 100 on July 15, remains remarkably fit and mentally sharp. He exercises and swims daily, and still drives his car.

And, be warned, his sharp sense of humor is locked and loaded at all times.

“What we are doing is celebrating the second anniversary of my 50th birthday,” he said.

After a military career of more than 30 years, he and his wife, Virginia Rose, moved to Bradenton in the early 1970s, where he worked as a real estate broker and appraiser before retiring in the late 1990s.

So, what’s the secret for such a long, healthy and successful life?

The answer can be found in his long marriage to his wife Ginny, who lost her life to cancer in 2010.

“Her foot prints are all over my careers in the military and the real estate brokerage/appraisal business,” he said.

Since Ginny’s death, his daughters Nancy Atherton and Sandy Atherton, and other family members have embraced and supported Paul.

“It’s a godsend having family members around,” he said.

Grandson John Holder, 50, was inspired to join the Army by his grandfather’s example.

“Grandpa’s stories sold me right into it,” Holder said of his own 20-year career that included a deployment to Iraq. “Our whole family is nothing but military.”

“He is so sharp,” she said, adding she feels blessed to have Paul in her life, especially since her own grandparents died when she was young.

“He is the first one I have had the honor to call granddad,” she said.

Paul Atheron joined the Army National Guard in 1939 in Vermont. When the Japanese attacked Pearl Harbor, his Guard unit was federalized and sent to Camp Blanding, Fla., for training. Later his unit trained at Camp Shelby, Miss., and Fort Ord, Calif., before being sent to the Pacific with the mission of augmenting American fighters on Guadalcanal.

But while putting into port at Espiritu Santo in 1942, the ship, the S.S. President Coolidge, hit two mines and sank. While there was little loss of life among the 5,000 troops on board, all of their supplies and equipment were lost.

“The captain tried to run the ship ashore, and succeeded partly. The ship sank in about 50 minutes with minimal loss of life,” Atherton said. Atherton spent the next six months on Espiritu Santo where dysentery and dengue fever were common afflictions, along with an occasional Japanese bombing attack.

While on the island he learned he had been accepted into Army Officer Candidate School. He returned to the United States by ship and graduated from OCS at Fort Benning, Ga., in 1943 as a second lieutenant, what some called a “90-day wonder.”

Initially assigned to Italy, he took part in the battle for Anzio, where he was wounded by exploding artillery. He was subsequently reassigned to joining the fighting in France.

In March 1945, Atherton won a battlefield promotion to first lieutenant for leading his patrol in combat against German defenders in Ostheim, France.

In the recommendation for promotion, the commander of the Seventh Infantry Regiment reported that Atherton led three platoon members across the Fecht River to locate enemy positions and defenses in advance of a planned attack. The intelligence he gathered was used with great success when his battalion attacked across the river two days later.

The recommendation also describes in detail an action of Jan. 25, 1945, when Atherton led his platoon in an attack on Bennwihr, France, closing with this statement:

“Leading his assault squad through point-blank hostile rifle fire that barely missed him, Lt. Atherton cleared approximately 15 buildings and captured no less than 40 prisoners within a two-hour period.”

Atherton missed the end of the war, being seriously injured in an artillery attack while crossing the Rhine River. He worked himself back into shape during the next year and was allowed to continue his military career.

In the early days of his Army service, he met the beautiful Virginia Rose Greenwood of LaCrosse, Wisc., and married her after a whirlwind romance. His parents didn’t know about the marriage until they showed up together at their home.

But it was one of those marriages when the couple just knew that it was right.

It was a marriage that would take them into some harrowing days after World War II in Austria, which was then occupied by Russia and the other allies after the German defeat, as well as other assignments around the United States and the world.

In 1964, he was assigned to Vietnam, and was in the Brinks Hotel, when the Viet Cong, disguised as Republic of Vietnam soldiers, drove a car packed with explosives into the hotel parking compound. The bomb, detonated by timer, collapsed several floors of the hotel.

News agencies around the world carried reports of the Christmas Eve attack on the hotel, which was primarily used for officer quarters. The bombing served as statement by the Viet Cong that they could attack anywhere and no one was safe.

Atherton’s photo appeared in Life magazine, showing him stumbling out of the rubble, his face covered in blood. For a few days, Atherton’s family feared that he had perished in the attack.

Atheron recalled that he was in his room preparing to meet Bob Hope, who was in Vietnam to entertain troops, when the car bomb exploded.

The blast knocked Atherton out and sent him to the hospital for the night. Hope visited him there, got his home address and sent a nice note to Atherton’s family.

In 1969, the Army notified Atherton that it was preparing to send him to Vietnam for a second tour.

“He told us he had his orders and it was up to us whether he went to Vietnam or retired,” his daughter, Nancy Atherton, recalls.

The news was cause for a family meeting around the dining room table. Ginny and her girls sent Paul out of the room while they debated their future.

“My mother didn’t want him to return to Vietnam, but she would never try to stop from doing something he felt he needed to do. She honored this country as much as he did,” Nancy Atherton said.

Paul returned to Vietnam for his second tour and returned safely home in 1970. In 1973, he retired from the Army and the family moved to Bradenton.

Ginny was a classic military wife, supporting her husband’s career while rallying her children through frequent moves and reassignments.

“Every time we moved we were excited about it because of her,” Nancy said.

Melissa Holder recalls that Paul would never say “he” got a promotion.

“He would say ‘we’ got promoted,” she said

Paul said that his daughters were supportive of his career and the frequent moves.

“Many kids would rebel if they frequently had to leave their school and their friends. My girls were always very supportive,” he said.

In addition, the The United States Army Officer Candidate Schools Alumni Association installed Paul in its Hall of Fame in recognition of his distinguished career.

Looking back on his career, spent primarily with the military police, rather than the infantry, is a humbling experience, he said.

“I was given the honor of commanding troops from the squad level to the brigade level during my career,” he said.