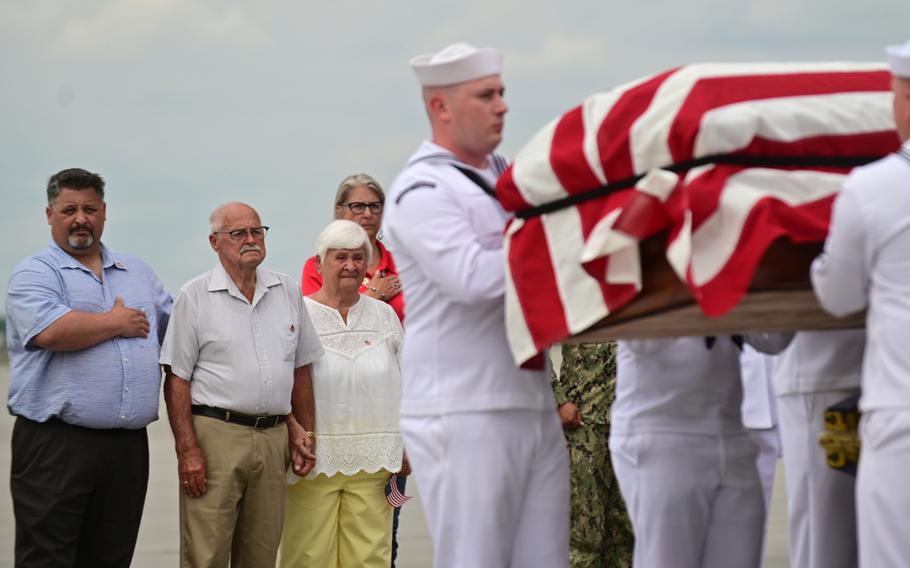 Orville Staffenhagen, second from left, brother of Navy Fireman 1st Class Neal Todd, stands at attention as his brother's remains are escorted from an airliner by a United States Honor Guard to a waiting hearse at Minneapolis/St. Paul International Airport on Thursday, July 8, 2021. Standing next to Staffenhagen is his son Anthony, left, and his wife, Delores. Todd was killed while stationed aboard the USS Oklahoma during the Japanese attack on Pearl Harbor on Dec. 7, 1941. His remains were positively identified through DNA samples in February of this year. (John Autey, Pioneer Press/TNS)

Inside was Navy Fireman 1st Class Neal Todd of Akeley, Minn., who had gone missing in 1941 with the bombing of Pearl Harbor. He was presumed dead, but that wasn’t confirmed until this year through DNA testing. He was brought home with pomp and honor to 58 family members waiting Thursday at the Minneapolis-St. Paul International Airport.

“He was one of a kind,” said Staffenhagen, 88, pausing often to regain his composure. “He was the friendliest man in the world. I’m really proud of him.”

Of the 12 children born to Irena Staffenhagen, eight served in the military, five of them at the same time. All came home except Neal, her fourth-born.

“It was a pretty trying time for my mother,” Orville Staffenhagen said.

The mother and son will be reunited Saturday when he is laid to rest near her grave in Akeley.

Wesley Todd, who survived the bombing, had tried to find his brother and wrote in letters home that others had reportedly seen him alive on another ship. By February 1942, the family was told that Neal Todd had been on the USS Oklahoma, one of the ships that was destroyed in the bombing.

Wesley himself had barely survived. He was stuck below decks in another ship with no way out besides a porthole. A couple of his mates stripped him down and covered his body with engine grease so he could squeeze through. His mates were too big to slide through and died as the ship took on water.

When Wesley broke the surface, he said the water was on fire and bullets were strafing the lifeboats filled with survivors. He stayed underwater as long as he could. He went on to serve in the Korean War and retired from the Coast Guard. He died in 1980.

Orville’s last memory of Neal was when he was 8 and his half-brother stopped by the elementary school in Akeley to say goodbye before heading back to Hawaii.

Neal’s body was brought in by plane Thursday and honored with a water salute. A fire truck sprayed an arc of water over the plane as it taxied in to the terminal as a way to honor Neal’s service. Orville laid a hand on the casket and cried. His brother had come home.

Other family members spoke about how they had submitted their DNA for testing to help the Defense POW/MIA Accounting Agency identify the remains of the crew of the USS Oklahoma, which had been interred in the Halawa and Nu’uanu cemeteries in Hawaii.

“The fact that we can actually get back someone who was from the Pearl Harbor attack and help bring closure to those families of the service members, it’s a tremendous honor,” said Lt. Cmdr. Michael Sheehan with the Navy Public Affairs office. “It also reinforces the commitment that the Department of Defense, and the country as a whole, has to service members, that if you pay the ultimate sacrifice, we are going to do everything we can to identify you and to bring you back and bring closure to your family.”