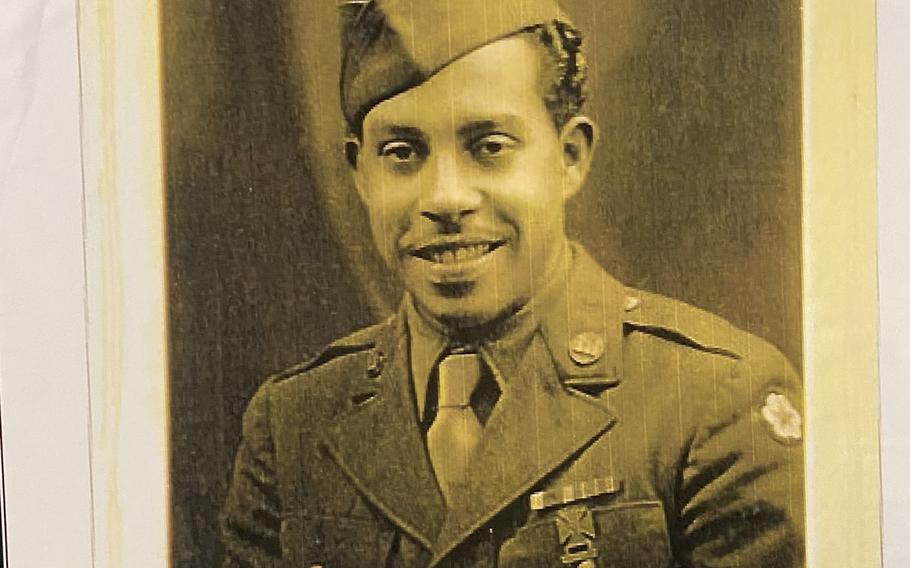 Osceola “Ozzie” Fletcher was a 22-year-old Army private delivering supplies to the Allied forces as they arrived on the coast of France on D-Day when his vehicle was struck by a German missile. The vehicle overturned, killing the driver and wounding Fletcher during the Battle of Normandy in June 1944.

But for more than three-quarters of a century, Fletcher was never recognized for being wounded in action in World War II. Instead, Fletcher said, he and about 2,000 other Black U.S. soldiers who saw action on D-Day were overlooked or denied awards because of racism and the racial inequalities of the country, including in the U.S. armed forces, which were racially segregated at the time.

“Black soldiers didn’t get the Purple Heart. They got injured, damaged, hurt. But they never got wounded,” the Brooklyn native said to local media last year. “Only the White men who were wounded got Purple Hearts.”

That changed Friday in New York for Fletcher when the 99-year-old was awarded the Purple Heart, an honor that his family and military and political leaders said should have been conferred decades ago.

“It was an honor and privilege to pin a long overdue Purple Heart on a great Soldier and member of the Greatest Generation, Mr. Ozzie Fletcher,” Gen. James McConville, chief of staff of the Army, said in a statement to The Washington Post. “This week, we were able to pay tribute to Ozzie for the sacrifices he made in service to our great Nation during World War II.”

In a video message at the ceremony, Senate Majority Leader Charles Schumer, D-N.Y., described Fletcher as a “loyal New Yorker” who “served this country with distinction and selflessness even while African American soldiers were treated as second-class citizens,” the New York Daily News reported. After McConville awarded him the medal, Fletcher’s daughter, Jacqueline Streets, said, “The wrong has been righted.”

“He was really determined in telling the story of how African American soldiers did not receive their due,” Streets told The Post. “It became my mission to get him this Purple Heart.”

Wearing military regalia, Fletcher smiled from a wheelchair as “The Star-Spangled Banner” played at the private event at Fort Hamilton Community Club in Brooklyn.

Fletcher being honored with the Purple Heart comes as some military institutions face allegations of racism. An independent investigation of the culture at Virginia Military Institute released this month found that “institutional racism and sexism are present, tolerated, and left unaddressed at VMI.” Half of Black students at VMI “strongly or somewhat agree” that the school suffers from a “culture of racial intolerance,” the report found, while 10 percent of White cadets said the same.

Fletcher grew up in Manhattan and the Bronx before he was drafted in 1942. Serving in the 254th Port Battalion, Fletcher boarded a segregated ship that took his fellow soldiers from Portsmouth, Va., to Europe. He recalled to the Daily News in 2019 how the segregation on the overseas deployment was particularly difficult as families gathered to send their loved ones off to war.

“We didn’t stay on the deck when we departed, waving handkerchiefs,” he said of Black soldiers. ″We were on the bottom.”

His service had him bouncing around England, often loading and unloading supplies off ships in the kind of labor-intensive work passed off to Black soldiers, he told Our Time Press last year.

“It was everyday discrimination,” Streets told The Post. “It was the other American soldiers that gave them [Black soldiers] the hardest time.”

He’d be wounded three times in his military career, but D-Day in northern France is still hard to forget.

“The Germans were no chumps,” he said to the Daily News.

Fletcher returned to New York in 1946, got married and had five children, seven grandchildren and three great-grandchildren. He found a stable life with the New York Police Department, and he co-founded the Guardians Association, a New York organization for Black law enforcement professionals. He also taught at Boys High School in the Bedford-Stuyvesant neighborhood of Brooklyn and worked in Brooklyn’s district attorney’s office.

Streets said her father did not speak of his service much until about 20 years ago, when his friends started to die.

“You want people to know what you lived through,” she said. “You don’t want to just disappear and no one ever really knows what happened.”

About seven years ago, he asked his daughter whether she could look into getting him replacement medals for his service. That would soon result in Fletcher opening up more about his experiences - and a push from Streets to get her dad a Purple Heart she says he should have received.

Making that happen proved difficult. Streets found out that her father’s military records had burned in a fire in 1973. After a film crew interviewed him about his experiences, the recording was forwarded to the Joint Chiefs of Staff. Streets eventually contacted the Joint Chiefs to get her father his award.

Lt. Col. Scott Johnson, the Army Human Resources Command’s chief of awards and decorations, explained that the fact-finding process was not easy. The Army was also reviewing a Purple Heart application for Johnnie Jones, a Black 101-year-old former warrant officer.

“A lot of times, [soldiers] never received the documents required,” Johnson said in an April news release. “Most times, they did not even make the documents. That is the most challenging part for us.”

By April, the Army had its answer: Fletcher was getting his Purple Heart. When Streets met with her father to tell him and her mother, she said Fletcher was “disappointingly cool.”

“How do you feel about that?” she asked.

The ceremony Friday was better than good, Streets said. Although Fletcher played it cool in his words, sometimes speaking in French to show off to those gathered, Streets saw her father cry for the second time in her life.

“He was not a quitter by any means,” she said. “It was amazing and exhilarating.”

As he told reporters that he was going to have his family frame his Purple Heart, Fletcher acknowledged the weight that had been lifted by the honor that had been long elusive.

“You will remember the Fletcher name now,” he said.