82 years after escaping the Nazis, he educates NC students about hatred and bigotry 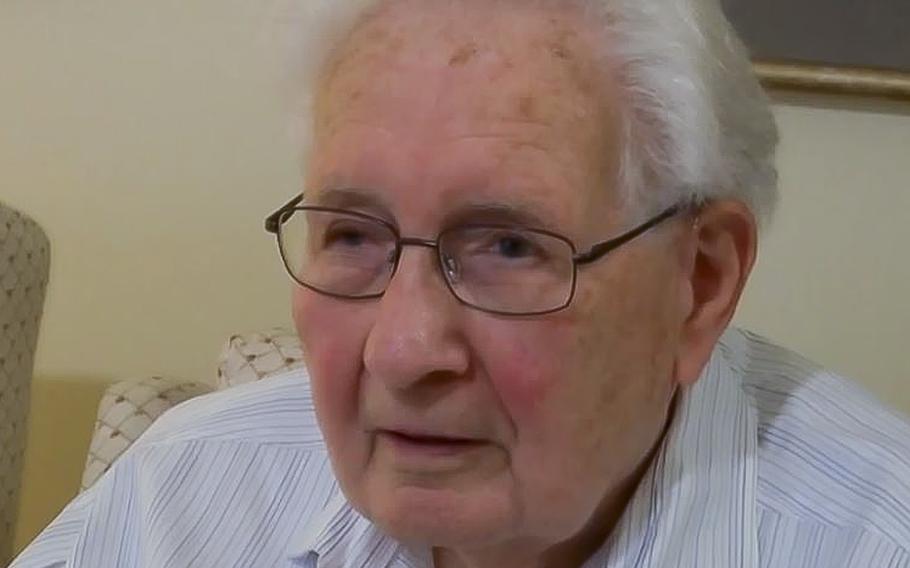 (Tribune News Service) — After his wife died two years ago, Irving Bienstock was left without any immediate family. If you had gone to his birthday party this week, you would never have guessed. The room was filled with balloons, personalized cookies, and 45 people eager to celebrate Beinstock, whose work educating people about the Holocaust has profoundly affected so many in his community.

Bienstock, a Holocaust survivor and US military veteran, celebrated his 95th birthday on Tuesday.

Around 400,000 Holocaust survivors who survived the Nazis are alive today. That number is expected to drop by 75% over the next 10 years.

After Rabbi Michael Wolk blessed the food, a smorgasbord including bagels, spreads and kugel, a sweet egg noodle casserole often served at Ashkenazi Jewish events, the guests settled in to eat. Bienstock stood up to address the crowd.

Bienstock mentioned his “three angels,” members of the Jewish Community Center who have become his support system since his wife, Lillian Bienstock, died two years ago. The three women, Lynne Sheffer, Susan Jacobs, and Dana Kapustin buy Bienstock groceries, invite him to Shabbat dinners, and even took him on the trip of a lifetime to Israel just before the pandemic in early 2020.

“Irving is open to new relationships, he’s open to love, to sharing, he’s open to friendship, and he reciprocates ... so he has made his friends into his family,” Kapustin said.

Bienstock was 12 years old when his mother put him on a train alone headed to Holland in 1939, hoping that he would be safe from the violent persecution of Jews underway in his hometown of Dortmund, Germany. With only 10 German marks (about $4) and one suitcase, Beinstock arrived in Holland. He was taken to a children’s home where he was reunited with his younger sister Sylvia, and after a few months they were moved to an orphanage in Amsterdam. Thirteen months later, Bienstock’s mother escaped to Holland and boarded a ship to New York with her two children, where they were reunited with their father.

Bienstock returned to Europe a few years later after enlisting in the US military at 18. During his time as a soldier in Italy, Beinstock was forced to work on Saturdays, despite it being Shabbat, the Jewish Day of Rest, and experienced anti-Semitism throughout his time in the military. Nonetheless, he was dedicated to fighting Nazism and saving as many of his fellow Jews as he could, he said.

Bienstock has been a key leader in the Butterfly Project at the Levine Jewish Community Center. The project educates children on the dangers of hatred and bigotry and aims to cultivate a sense of social responsibility to stand against prejudice in any form.

“He tells his story to middle school students every day. His impact on our entire Charlotte community is so profound, and he has helped to educate so many young people in our community about what it means to take a stand when you see injustice,” said Peter Blair, CEO of the LJCC.

Once Bienstock shares his story with students, they each paint a ceramic butterfly representing one of the 1.5 million children killed in the Holocaust. The butterflies are added to a sculpture outside the LJCC. So many children have participated in the Butterfly Project that new sculptures have been created at participating middle schools to hold the extra butterflies, serving as a visual reminder of the lives lost during the Holocaust.

“Irving has touched the lives of thousands of children,” Kapustin said. “He’s a veteran ... people can really relate to him because he’s an American, he served in the Army, he’s a refugee, he’s an immigrant, so he understands all of these hot-button issues that politics is talking about today and he has a different perspective because of what he’s been through.”

Bienstock’s commitment to serving his community and connecting with others has earned him a beloved place in Charlotte’s Jewish community.

“He’s really the spirit of the congregation,” Rabbi Wolk said.

“The fact that 45 friends attended in the middle of the day, shows how much he is respected and appreciated,” said Sheffer.