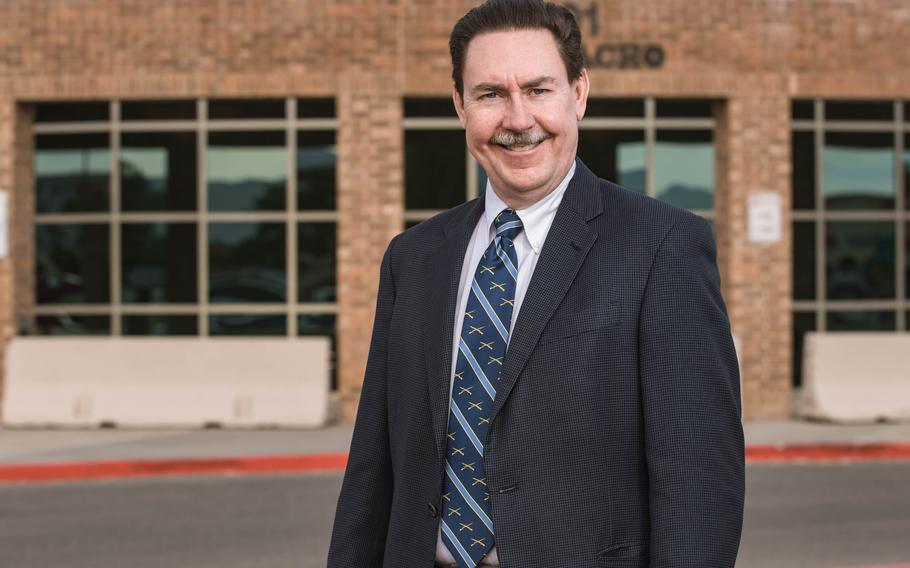 LAS CRUCES — You may have heard of treatment courts, but what exactly is a Veterans Treatment Court?

The Las Cruces VTC joins more than 400 VTCs throughout the country; studies show that veterans who have completed the program are more likely to reside in their own housing and less likely to experience a new incarceration.

The VTC program officially began in 2018 and operates out of Third Judicial District Court Judge James Martin’s courtroom. The program itself is a rigorous 12-step program — different from a traditional Alcoholics Anonymous program. When a person is arrested, they are asked if they are a veteran. If they reply in the affirmative, their name and case are flagged for VTC consideration. People who did not receive an honorable discharge also qualify for the program — the requirement is that time was spent in the military.

If their case elevates to district court, judges might recommend them for the VTC program and they undergo a screening process. Victor Sanchez, VTC coordinator, explained that applicants are screened on several points, including depression. Those accepted into the program are generally determined to be high-risk, high-need offenders.

Mixing lower-risk or lower-need offenders with those in higher categories is not practiced, because it can potentially lead to people taking on the more severe behaviors.

The program involves aggressive accountability, counseling and frequent court appearances. Martin explained that the 12 steps are part of five phases — four active phases and one phase of aftercare. At the start, one of the first goals is helping the veteran admit they have a problem and need help; people have to be honest with themselves. Martin explained they need to buy into the program. Otherwise, they won’t be successful or get what they need out of VTC. The ultimate goal is to reduce recidivism, or repeat offenses.

Each program participant is assigned a mentor who is a fellow veteran. A surveillance team checks in on participants several times a week for random drug tests and to ensure they meet curfew. If a participant fails to comply with the requirements, they may get sanctioned by the judge. This can mean extra community service hours or, possibly, time spent in the county detention center.

The VTC currently has nine participants and has, to date, graduated 13 veterans. They expect to increase those numbers going forward. Generally, the program takes 12 to 14 months to complete, but it is completely self-paced and unique to the needs of each veteran.

One male graduate, a member of the Marine Corps, took 12 months to complete the program. Client privacy is of high importance to the court, and participants will not be named. He explained that he ended up in legal trouble due to charges of aggravated assault with a deadly weapon. He said he tried various programs before, but they were ineffective for him. The judge recommended him to VTC, and he said he found it to be “hardcore.” He had to learn to trust himself.

“The extreme accountability of the (tests) three, four times a week for a year was enough to hold me still while the program worked on me,” he said.

He said he started out homeless and riding a bike but ended up getting a job and eventually gaining an apartment and truck. He graduated in March and has remained sober.

Sanchez said it is rare that women are clients of the VTC program, but one female graduate, a U.S. Army Nurse, also agreed to share her story.

She told the Sun-News she lost her husband in a plane accident in 2004. She had a hard time processing and coping with the loss and “racked up” five DUIs in six years.

“It was totally unlike me,” she said.

But the program’s structure allowed her to make progress. VTC partners with Mesilla Valley Community of Hope, Esperanza Guidance Services and the Veterans Justice Outreach Program — all of which she gave kudos to, as well as the probation and parole officers involved. She said the program structure provided the discipline needed to complete the steps.

It took her about 11 months to complete the program — with one sanction from Martin requiring extra community service — and she graduated in July 2020.

Both graduates still have several years of probation to complete.

Esperanza Guidance Services is the treatment provider the VTC partners with. She explained that the treatment allows veterans to rebuild moral and ethical values that were tossed aside in favor of the “spirit of addiction.”

She said all involved with the VTC program can be tough and “no-nonsense,” but they ultimately want to see the veterans succeed.

No longer a skeptic

Martin said he was not always so trusting in drug treatment courts, but he has since seen the benefit they have on people who are struggling. VTC is not a replacement for serving time, but is usually a condition of probation.

One or two participants generally graduate per quarter, and only one participant since the beginning of the program has “flunked.”

“I run into people regularly in the community that are thankful that I took an interest in their life,” Martin said. And the fact that the drug court program overall works that way, I’m a convert. It works, I believe in it. I was a skeptic to begin with, but I am convinced that it’s worthwhile.”

Leah Romero is the trending reporter at the Las Cruces Sun-News. lromero@lcsun-news.com