SANTA ANA, Calif. (Tribune News Service) — A year ago, Rick Schunke struggled for purpose — really, for a reason to live.

The former Navy weapon's specialist was coming off a deployment to the Middle East where his ship, the USS Leyte Gulf, a guided-missile destroyer had responded to rising tensions with Iran.

"We were toe-to-toe with Iran," he said. "There was a heightened risk and everyone had each other's back. We were bobbing and weaving based on Iran's actions. Tankers had been blown up in the Strait of Hormuz and we were the strike group out there."

Schunke's deployment ended in January 2020 and in April, his four-year service contract was up just as the coronavirus pandemic hit. Jobs he lined up for his return to civilian life were gone. He was without a mission, without camaraderie.

Schunke fits a trend of people coming out of the military and trying to reintegrate back into society — who researchers are finding are at greater risk of feeling isolated, lost and abandoned and are more likely to think about killing themselves. A lack of meaningful social connection is contributing to this.

Major Thomas Schueman, who fought alongside his Marine buddies on the battlefield only to see them later struggle in the civilian world, is trying to help Schunke and others find a tribe outside the service with the intent of stemming the rising tide of suicide. His focus is on saving those who are feeling lost and alone after service and acknowledging that heroes don't only die on the battlefield.

"It was scary. I felt like I didn't have a purpose and a community to lean on," Schunke said of the end of his military career last year. "I felt lost."

His exit from service came just as the coronavirus forced several support programs the military has to cancel, including a transition assistance program Schunke would have gone through that helps military with resume-writing and career counseling. Schunke said he also couldn't arrange the typical briefing on veterans benefits or a doctor's checkup to see if he was eligible for any disability assistance because of the pandemic.

He went back to his hometown in New York. There, he threw himself into trying to help his family save their Irish pub. That gave him access to a lot of alcohol, which at the time, he said, helped wash away his pain. But really, it was just pushing him further into a downward spiral of feeling alone and in despair. When four people close to him died — three in three weeks — his world hit rock bottom.

"I was becoming very angry at life," he said. "I felt everything was going wrong quickly. I wasn't eating. I had suicidal ideation. I didn't want to continue to live as I was. I felt trapped and tortured."

He found Schueman's group, Patrol Base Abbate, on social media and when its website launched he signed up immediately. He credits it with providing the human connections that make it easier to fit back into society.

Patrol Base Abbate has 10 regional chapters — with the Southern California chapter being among the largest.

Veterans speak a common language, and relationships are built on trust and communication. So, the way they bond — in-person and virtually — is over shared interests. There are clubs for surfing, exploring military history, going to gun ranges, hunting and reading.

Schunke had always wanted to get into surfing and now he's learning with other veterans and active-duty service members. He also enjoys bonding with others over guns and fitness, more familiar from his time in the service. The clubs also get together once a month and do community service projects.

"It makes me feel like I'm part of a team and working towards a common goal," he said. "It also gives me an opportunity to talk with others and understand the things they've been going through. Helping others keeps me honest. I know myself well enough that if the only person relying on me is me, then I will falter."

The Pew Research Center reports one in four veterans transitioning out of the military said re-assimilating into society is difficult. Researchers also said veterans who served in combat appear to have a much higher rate of adjustment to civilian life than those without combat experience. And, the new veterans were most vulnerable to suicidal thoughts six to 12 months after leaving the service.

Each year more than 200,000 people transition out of the various military branches.

According to the 2020 National Veteran Suicide Prevention Report compiled by the Department of Veteran Affairs, suicide among veterans appears to be increasing in America at a pace similar to the broader civilian population. In 2018, 6,435 veterans killed themselves, compared with 6,056 in 2005, despite a significant decrease in the veteran population during the intervening years.

The rate of suicide among active-duty military also continues to rise, according to Department of Defense data. In 2020, 377 service members took their lives, though officials say that number could still increase as each death is investigated. In 2015, there were 266 reported.

"We've never spent more money and it keeps getting worse," said Schueman, who with Camp Pendleton's 3rd Battalion, 5th Marines, saw some of the fiercest fighting in the Sangin District in Afghanistan in 2010. "It seems insane we're doing the same thing over and over again. We need to do something different."

While working on his master's degree at Georgetown University, Schueman came across research from Dr. Jonathan Shay, a Veterans Affairs psychiatrist who focused on Vietnam veterans and PTSD. Shay concluded, Schueman said, that more than any therapy in his office or medication, the thing that most helped the veterans confront their issues was having a sense of community. More research found the Department of Veterans Affairs was also making a connection between suicide and "feelings of isolation and disconnection."

"I started looking around and of all the good resources — 90% were allocated to Special Forces and elite teams and wounded warriors," he said. "Yet, non-combat veterans are twice as likely to kill themselves. In 2020, there are no reasons not to bring more resources online that are more inclusive."

And when in the span of two months last year, three Marines he fought with in Afghanistan killed themselves, Schueman, now a professor at the Naval Academy, said he could no longer sit on the sidelines.

He was going to create a community where veterans and active duty could find a safe haven among those in their own tribe.

"All of us have a natural desire to be in a tribe and be connected," he said. "In the military, that natural desire is intensified because everyone is willing to die for everyone on the left and on the right. When you exit and someone hands you a paper and says good luck, an identity crisis happens because that thing that had meaning is now gone."

In November, Schueman founded Patrol Base Abbate. It's open to all service members and reservists, no matter where and when they served.

"I didn't want this to be a place where you put yourself in a box," Schueman said. "You may be a disabled vet; you may have PTSD. There's no box. It's just: Did you serve?"

The chapters and the myriad of activities they involve veterans in and bond over are the "rallying points" of the program.

But there is also an actual "patrol base," a 340-acre property in Montana, for the veterans who need a retreat. A believer in outside healing, Schueman said he wanted members to have a physical space to go. 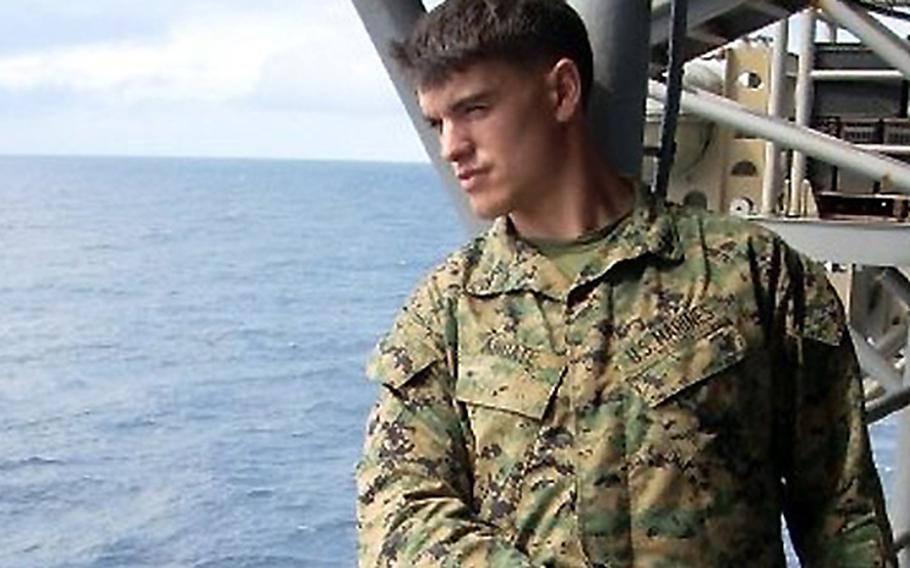 Sgt. Matthew Abbate, the namesake of the Patrol Base Abbate group. ()

The group's namesake, Sgt. Matthew Abbate, is a Marine from Fresno, a close friend Schueman calls a modern-day Achilles. Abbate died in a firefight on Dec. 2, 2010 in the Sangin District. He was awarded the Navy Cross for heroic actions earlier in the deployment.

"He was the fiercest warrior on the battlefield of our generation," Schueman said. "There are none like him. Even though he was savage on the battlefield, he was very humble; people were naturally drawn to him."

It's Abbate's warrior spirit Schueman hopes those who seek refuge with his group will emulate in their own fight to get back to the world with a sense of purpose.

A new kind of VFW

"They help vets place their individual experiences into larger, even historical, context by participating in conversations with like-minded supporters," he said. "In a sense, VFW halls played a similar role after World War II as American servicemen came home after war and used similar communal spaces to help them reintegrate back into postwar society."

Since Schueman put out the word, more and more veterans and activity-duty members are finding the spaces Patrol Base Abbate is creating. Regional chapters have formed in California, Illinois, Texas, North Carolina, Georgia and Kentucky.

"I want to challenge the narrative that veterans are broken, damaged, entitled and looking for a hand-out," Schueman said. "Instead, we're the people who are finding areas in the community that are most in need and serving in that space."

He first crossed paths with Schueman during their deployments in Afghanistan.

"He just had this presence and you just wanted to work with this guy," Denner said. "His heart for this is undeniable. I think it will be game-changing for these veterans."

On Monday, Denner, Schunke and a group of other veterans and active-duty members will participate in a Memorial Day 10-Hero Workout starting at 5 a.m. in Marina Park in Newport Beach. At 8 a.m. they will move the workout to Irvine Terrace Park in Corona del Mar. The public is invited to participate.

The "Hero Workout" is traditionally how many veterans and active-duty service members have honored their fallen comrades on Memorial Day.

The Patrol Base Abbate members will be completing 10 Crossfit-style workouts — running, swimming, deadlifts, push-ups — each named for a fallen service member. The idea is to push through in their memory and honor.

"I've always just felt extremely lucky to have walked off the battlefield with no injuries," Denner, 33, of Newport Beach, said. "I've known so many guys who can't do that. I owe it to them to push myself to honor them."

Denner hopes the public effort will make people a bit more aware of the sacrifices made by those who have served in the military and publicize the group so more veterans and active-duty service members know the support is out there for them.

While 75% of Patrol Base Abbate's members are veterans, Schueman's focusing on recruiting more active-duty service members, whether they have signed up for four years or 40 years.

"At some point, you're getting out and I want to be proactive," Schueman said. "So that during the first year of an identity crisis when veterans are vulnerable, they already have a place to come and don't have to do it alone."

For Schunke finding Patrol Base Abbate has been a life-saver. Now he's the group's Southern California regional operations coordinator.

"PB Abbate has allowed me to run back into the flames and help pull people out of the mental hell I made it out of," Schunke said. "And, if my story saves even one person's life, then it's my duty to my brothers and sisters to fight alongside them against their own demons."