‘He was so lonely’: D-Day veteran who struggled in the US finds new home in Normandy 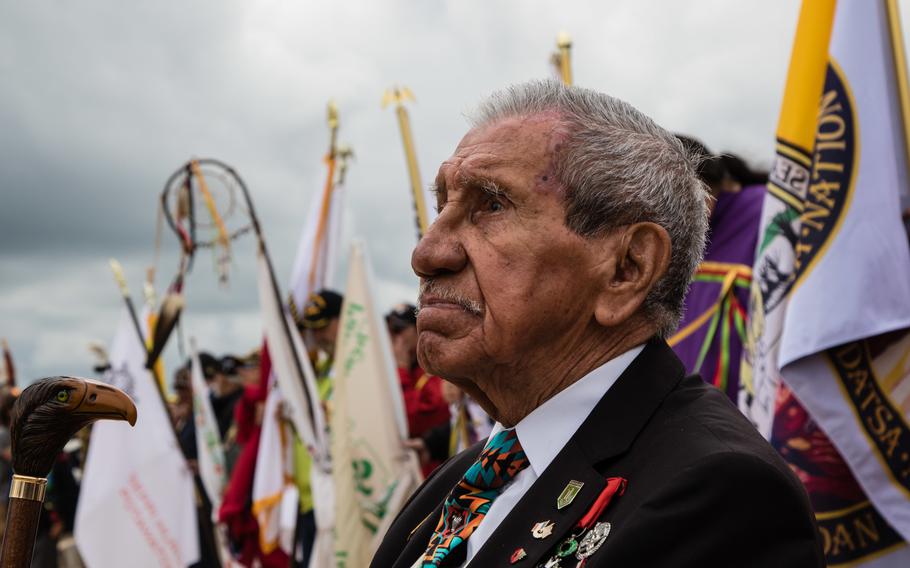 World War II veteran Charles Say reflects at the shores of Omaha Beach, France, on June 5, 2019. More than 1,300 U.S. service members, partnered with 950 troops from across Europe and Canada, converged in northwestern France to commemorate the 75th anniversary of D-Day. (Dominique Washington/U.S. Army)

Editor’s note: This story was originally published on July 3, 2019. It was republished due to technical difficulties.

A friend from across the Atlantic was worried.

“I told him you can’t continue this way,” said Marie-Pascale Legrand, 57, of Bretteville-l’Orgueilleuse, a village in Normandy. “I asked his tribe to help and nobody did anything. I told him, come and I will keep you here.”

Shay, a Penobscot Native American who just turned 95, now lives in Normandy, about 20 miles from the beach he stormed 75 years ago as a 19-year-old Army medic.

“I’ve found a new home,” Shay said by telephone Tuesday. “This gives me an opportunity to visit the cemetery where I have lost many friends who are laying there in graves. I can visit them now as often as I like.” Shay, who was in the first wave of troops to hit Omaha Beach during D-Day, went on to fight in the Battle of the Bulge and later the Korean War.

Since 2007, he had made annual June 6 D-Day pilgrimages to Normandy, where 9,388 war dead are buried at the American cemetery overlooking Omaha Beach.

When President Donald Trump, global leaders and thousands of people gathered last month to commemorate the 75th anniversary of the allied invasion, Shay’s voice carried over loudspeakers throughout the cemetery during a video montage of soldiers in battle.

“The heroes, the real heroes, are laying here in the cemeteries,” Shay said. “These are our heroes. We should never forget them.”

Shay and Legrand, who for years has helped take care of the World War II vets during their visits to Normandy, first met in 2016. Legrand said she always made a point of staying in touch with some of the veterans she had met, carving out days to visit them during business trips to the U.S. and corresponding by phone and mail. 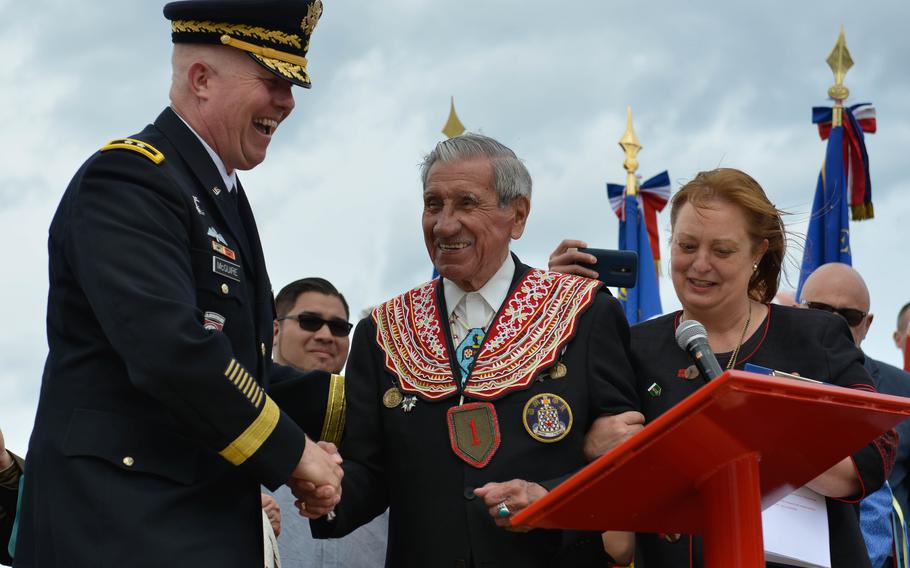 The decision to take Shay into her home, she said, was the culmination of a personal mission that dates back to 1984.

“I was invited to attend a ceremony by a friend of mine. I was a young girl at the time and I listened to the famous speech by Ronald Reagan,” she said.

“Here, in this place where the West held together, let us make a vow to our dead. Let us show them by our actions that we understand what they died for,” Reagan said during his 1984 speech in which he recalled the valor of the “boys of Point du Hoc.”

Legrand, who regularly lays flowers and cleans numerous graves at the American cemetery, said she was so moved by Reagan’s words that she made it a point going forward to do her part. “I realized he was right,” she said. “I have been involved in taking in World War II veterans since 1984.”

In Shay’s case, a temporary arrangement became permanent. When Shay arrived in May 2018 at her home, he wasn’t feeling well.

“I had many medical problems. Since I came here Marie has made it possible to have some problems corrected, surgically if I needed it,” Shay said.

One of the first steps was getting a specialist to alleviate discomfort from a catheter that had been in place too long. “One-and-a half days later he was a different man,” Legrand said. “At that point we decided he would stay with me a little more.”

Then Legrand asked if Shay wanted to make it permanent.

“I have a very large house, and I asked if (Shay wanted) to stay with me. And he was more than happy. He said he was so lonely in Maine,” Legrand said.

Paul Herbert, who retired as director of the First Division Museum at Cantigny Park in Wheaton, Ill., in 2018, met Shay through D-Day-related activities more than a decade ago.

Shay had no family nearby in Maine, became increasingly isolated and had trouble getting health care, Herbert said.

“He was unable to make medical appointments at the VA center 100 miles away (in Maine),” Herbert said by email. “Marie has gone above and beyond. She is a hero and truly selfless.”

Shay spends his days now tending to the house pets, including a dog, cat and turtles. He also works in the garden.

In the afternoons, he joins Legrand at her office, where she runs a food supplement company in the nearby city of Caen. Adapting to a new home has been easy, Shay said.

“Marie and I have no problems ... we’ve learned to live together very comfortably and I am particularly happy I accepted her invitation to move to Normandy and be close to Omaha Beach and the cemetery.” 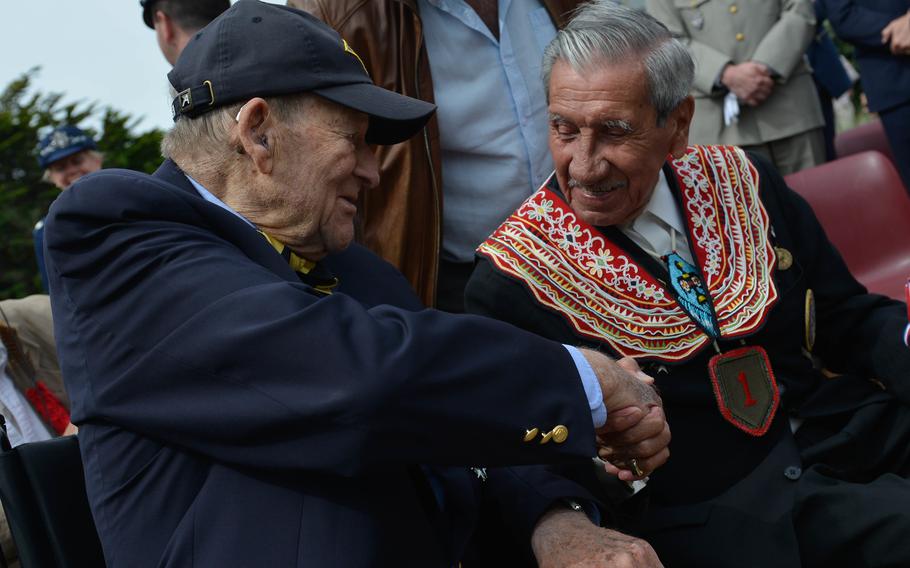 The European way of life seems to come naturally to Shay, Legrand said. After his military service, Shay lived for years in Vienna where he worked for the United Nations Atomic Energy Commission and after that found employment at a Viennese limousine service where he chauffeured VIPs.

“He is more European than many, many Europeans in his way of living,” she said. “I love opera and he loves opera. We can go to concerts at least twice a month. We go to the theater, we are always on the go.”

On Saturday, Shay, Legrand, and her niece and nephew, celebrated Shay’s 95th birthday in style, dining at a Michelin-starred restaurant where they ate a 13-course meal. And on July 4, Shay said he will attend a celebration in a nearby town.

There are still lots of medical appointments though. Last month, a small skin cancer lesion was removed. In Normandy, most of the procedures are done for free by local doctors, a gesture to honor Shay’s service, Legrand said.

Legrand said her wish is to help Shay enjoy the time he has left.

“He is doing much better than last year,” Legrand said. “We meet lots of people and he is invited everywhere. The day it is too much, we’ll stop.”

So far, there are no signs of slowing. The other day, after bustling around Normandy meeting new friends, Shay was feeling content. “After all that, he said ‘Marie, we had a very interesting day,’” Legrand said.