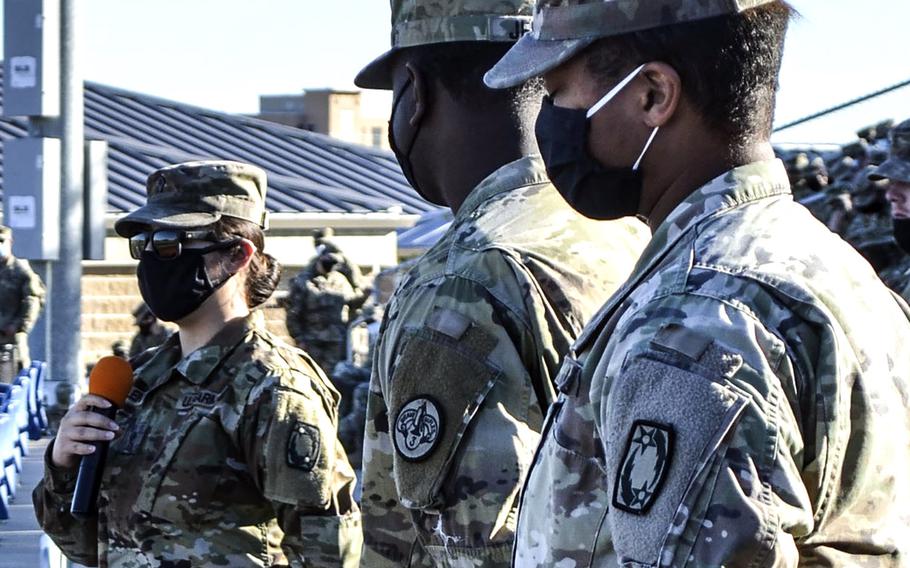 A soldier assigned to Fort Hood, Texas, spoke Tuesday to base leadership about the difficulty that she faced in reporting a sexual assault, including that she was forced to live in the same barracks as her perpetrator. (Rose L. Thayer/Stars and Stripes)

AUSTIN, Texas — A committee of civilians that examined the command climate and culture of Fort Hood told House lawmakers Wednesday that its investigation found years of systemic leadership failures at the Texas base contributed to the death of soldiers and could exist at other Army bases.

“A toxic culture was allowed to harden and set,” said Rep. Jackie Speier, D-Calif. “Your comments suggest that this has gone on since 2014 or maybe before. So how do we address those leaders who went on to other installations and bases and commands, but were part of the problem?”

Chris Swecker, the lead member of the committee who compiled the report, said many the recommendations to improve conditions at Fort Hood should be implemented across the Army. However, he said the group’s mandate was to look specifically at Fort Hood, which is an outlier in the Army in some areas including suicide, missing soldiers, sexual assault and drug use.

“We didn’t have the mandate to go outside of Fort Hood and do a deep dive,” he said.

The report — written by the five members of the Fort Hood Independent Review Committee — was released Tuesday and discussed Wednesday in a hearing of the House Armed Services Committee’s subpanel on military personnel.

“Despite red flags popping up for years, leaders ignored them,” said Speier, chairwoman of the subpanel who presided over the more than two-hour hearing that moved between large overviews of programs to specific details of sexual assault cases and deaths involving individual soldiers.

The nearly 140-page report offered a troubling look inside Fort Hood, which lead the House lawmakers to question whether the problem stretched beyond that one base.

“This issue effects not only Fort Hood, but overall our national security," said Rep. Deb Haaland, D-N.M. "The service members who participated in a culture of sexual harassment at Fort Hood will not just stay at Fort Hood. They’ll continue to be stationed at bases across the country and around the world and take that culture with them."

The report also found the base lacked procedures to properly identify when a missing soldier could be in danger and had an under-experienced and under-resourced criminal investigation office that often failed to appropriately investigate sex crimes and deaths, including suicides.

Nearly 30 soldiers assigned to Fort Hood have died this year, with five of those deaths being ruled as homicides. During a visit to Fort Hood in August, Army Secretary Ryan McCarthy said the base had the highest numbers of the Army formation when it came to violent crimes.

McCarthy appointed the civilian review committee to help understand the root causes of the violence, particularly because of the national media attention surrounding the disappearance and death of Spc. Vanessa Guillen. The 20-year-old Fort Hood soldier went missing on April 22 while working in an arms room on base. Her remains were found June 30 alongside a river about 30 miles from the base.

Spc. Aaron Robinson, another soldier in Guillen’s unit, killed her with a hammer, then moved her body. He shot himself dead July 1 when approached by civilian law enforcement in Killeen, the town just outside Fort Hood.

Swecker, who testified before the House subpanel alongside fellow committee members Jonathan Harmon, Carrie Ricci, Queta Rodriguez and Jack White, said Wednesday that the group sought to determine whether Fort Hood was operating within the Army’s values. He told lawmakers that the base’s high operational tempo caused by nearly 20 years of war led commanders to focus solely on readiness for deployment.

“In their peripheral vision, they didn't see this, and it was an act of omission versus an act of commission,” Swecker said.

Commanders repeatedly ignored command climate surveys, which are meant to provide a soldiers’ view of the unit to leaders. Those surveys revealed the deep problems, he said.

“We felt like that was a very valuable source of information,” Swecker said. “They did show some pretty dismal results, particularly with the larger units on the base. What we determined was that these climate surveys were not being used the way they should have been used.”

The findings of the report caused McCarthy to fire or suspend 14 leaders serving at Fort Hood, including a pair of two-star generals. He also agreed to all of the report’s nine findings and 70 recommendations.

“Are these firings sufficient to fix the issues at the base that have long proceeded this summer? Are we to believe that these 14 individuals alone created and maintained such a dangerous atmosphere at the base and now that it is safe to say that people are safe after this action?” Haaland asked.

Prior to the congressional hearing, Swecker said he briefed all 300 of the three- and four-star generals in the Army.

Speier asked whether further disciplinary action is necessary. That is up to the Army, Harmon responded.

McCarthy has established a group, dubbed the People First Task Force, which is charged with implementing recommendations from the report by March. The task force will be led by a three-star general.

Meanwhile, another internal Army investigation is said to be nearing completion. Gen. John Murray, commander of Army Futures Command, is leading that investigation, which focuses specifically on how the chain of command at Fort Hood managed all aspects of Guillen’s death. Because that report remains ongoing, the committee declined Wednesday to answer some questions from lawmakers.

“I'm very reluctant, and we’re all very reluctant to step on that investigation for very good reasons,” Swecker said. “I do think that they’re looking at the right things because we’ve been in liaison with the four-star on that and we’ve given them some material from our review.”

The House Armed Services Committee’s subpanel on military personnel also has an ongoing investigation looking into the cases of seven of the soldiers who have died while assigned to Fort Hood this year.

Following the hearing, Speier called on the Defense Department to broaden the scope of the Fort Hood investigation to include all military sites.

“All of the military services must implement the changes recommended in the report. And Congress must act,” she said.