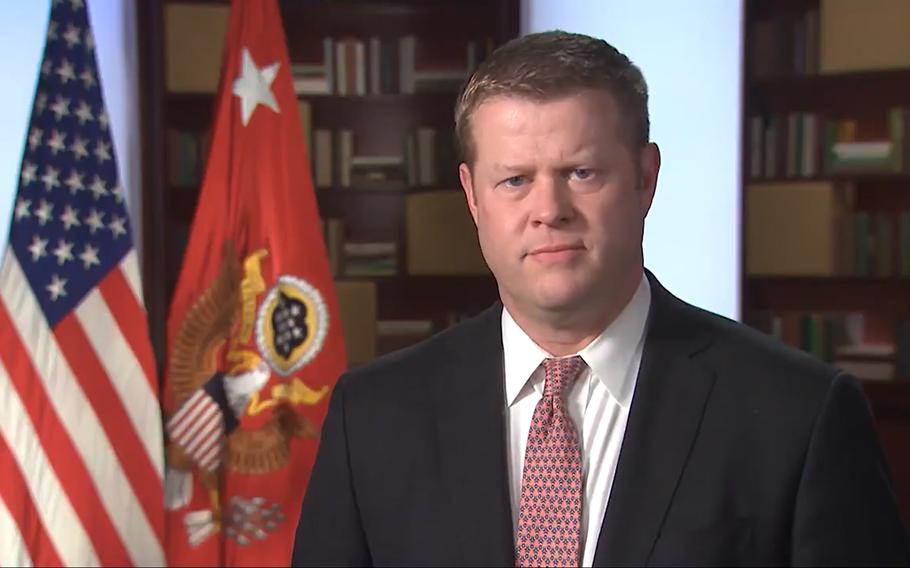 Army Secretary Ryan McCarthy released a video message Wednesday to address recent media reports about the Army’s program to prevent and respond to sexual assault and harassment. He also announced the findings of an outside investigation related to the disappearance and death of Spc. Vanessa Guillen will be released Dec. 8. (Department of Defense)

AUSTIN, Texas — Army Secretary Ryan McCarthy announced Wednesday that the findings of an investigation into the disappearance and death of Spc. Vanessa Guillen at Fort Hood will be released Dec. 8, stating the Army “must do better” when it comes to sexual assault and harassment among soldiers.

“Leaders, regardless of rank, are accountable for what happens in their units and must have the courage to speak up and intervene when they recognize actions that bring harm to our soldiers and to the integrity of our institution. If we do not have the trust of America — nothing else matters,” McCarthy said in a video posted online late Wednesday afternoon.

The secretary also said Army senior leaders have the final report from the Fort Hood Independent Review Committee and they are reviewing its findings and recommendations. McCarthy created the committee, which is made up of five civilians, to investigate the command climate and culture of Fort Hood, following Guillen’s death in April on the central Texas base.

Guillen, 20, was killed by another soldier with a hammer in an arms room. Her body was later moved off base and buried alongside a river in Bell County. The search for Guillen lasted more than two months, and during that time the soldier’s family revealed she faced sexual harassment at Fort Hood but she was too afraid to report it to her chain of command.

Guillen’s case brought national attention to Fort Hood and led McCarthy to confirm in August that the base had more instances of sexual assault and harassment than other bases, as well as other violent felony crimes such as homicide.

Nearly 30 soldiers to have died this year while assigned to Fort Hood. Five soldiers, including Guillen, died by homicide, which is more than double the previous four years, according to the Army.

The investigation was intended to get to the root cause of the violence.

“My preliminary review of the report, recent cases and recent media coverage, have hardened my belief that the Army’s [Sexual Harassment/Assault Response and Prevention] program hasn’t achieved its mandate to eliminate sexual assaults and sexual harassment by creating a climate that respects the dignity of every member of the Army family,” McCarthy said. “It is clear we have significant work to do to regain our soldiers’ trust in our [SHARP] program.”

When the findings of the committee’s report are released in December, it will include the Army’s action plan to address the recommendations, he said.

The secretary’s comments follow the release of a CBS News investigation this week that found reported sexual assaults have doubled in the military while the number of courts-martial and convictions for the charge have gone down.

The first two parts of the four-part series featured the stories of two soldiers who died by suicide after being sexually assaulted multiple times and then faced retaliation and isolation for reporting them. The families of the deceased women spoke to CBS News and said they felt the Army had failed them.

“I am deeply saddened and concerned by the recent news reports of how sexual assault and sexual harassment have plagued our force and brought harm to our soldiers,” McCarthy said. “This topic has captivated the attention of America and our Army leaders and it is abundantly clear – we must do better.”