So many patients sick with RSV had inundated Connecticut Children’s Medical Center that they had to be treated in hallways and playrooms. Facing their busiest season in memory last fall, hospital leaders floated a plan to enlist the National Guard to set up tents outside. Doctors braced for a dire winter — a looming disaster some dubbed a “tripledemic” — with flu season revving up, coronavirus roaring back and the holidays providing fuel for viruses to spread.

But no such surge materialized. The RSV wave has receded in Connecticut and across the country. Flu cases have rapidly dwindled. COVID hospitalizations rose briefly after Christmas, only to fall again.

“We are seeing the normal busy, but not the very busy that I thought we would see,” said Juan Salazar, physician in chief at Connecticut Children’s in Hartford. “I’m just so pleased we are now able to be back to normal staffing. Busy staffing, but not anything near to what we saw in the fall.”

It turns out that early waves of respiratory syncytial virus and influenza peaked before the new year, according to new data from the Centers for Disease Control and Prevention. And the expected winter uptick of coronavirus is nowhere close to overwhelming hospitals, as it did in 2021 when COVID wards were filled with unvaccinated people struggling to breathe and last winter when the highly transmissible omicron variant ignited a massive wave of illness.

The seven-day average of hospital patients testing positive for coronavirus has declined to 39,000 as of Friday, after peaking at 47,000 around Jan. 10. COVID-19 patients are occupying 5 percent of hospital beds, compared with 21 percent at this point last year, according to CDC data.

“It’s possible the decline might have been even greater without the mingling in the holidays,” said Barbara Mahon, a CDC official who oversees the response to coronavirus and other respiratory viruses. “Things don’t look as bad as they did a few weeks or a few months ago, but we are still very much in the throes of winter.”

Experts caution the country could see additional increases in flu, which sometimes has two peaks, and another RSV season in spring. The highly transmissible and immune-evading XBB.1.5 subvariant of coronavirus that accounts for half of all new U.S. infections and has been dominant in the Northeast could spread elsewhere.

Despite the declines, it’s still a busy winter for hospitals contending with a new unpredictable rhythm of infectious diseases. The viral onslaughts have taken a toll on an exhausted health care workforce and compromised their ability to care for patients with non-respiratory emergencies, hospital executives say.

Headed into the third anniversary of coronavirus reaching the United States, many hospitals are resigned to it never going away.

Comparisons to the devastation of the first two pandemic winters can mask the ongoing toll on the elderly and severely immunocompromised. COVID deaths are rising and averaging about 670 a day, well short of the 3,300 a day peak in mid-January 2021.

The United States is better equipped now than earlier in the pandemic to weather coronavirus surges because most people have some degree of immunity, and early treatment keeps the most vulnerable people from becoming seriously ill.

“As awful as omicron was, it left in its wake a tremendous amount of immunity,” said Jennifer Nuzzo, an epidemiologist at Brown University School of Public Health.

Even though the omicron subvariants that are now circulating cause concern because of their ability to evade antibodies, the immune systems of those who have been vaccinated or previously infected are still effective at keeping the cases mild, especially if they have recently received booster shots, doctors say.

At the Our Lady of the Lake Regional Medical Center in Baton Rouge, COVID cases peaked the first week of January, with 170 patients testing positive compared with 1,338 the same time last year. Doctors there believe COVID is still rampant in the community, but not as many people need hospital care.

Even after XBB.1.5 quickly became the dominant coronavirus strain in Massachusetts in December, the temporary rise in patients testing positive at the state’s largest hospital system was modest and did not surpass the last winter wave. The Mass General Brigham system, headquartered in Boston, now averages about 400 patients a day testing positive for coronavirus, compared to about 2,100 patients a day at this time last year.

Nearly three quarters of patients admitted with COVID in the most recent peak were “secondary” diagnoses, meaning the patient tested positive while admitted for other causes. While such cases still create complications for hospitals to isolate the patient and prevent spread, they do not drain as many clinical resources, doctors say.

“This is all good news overall,” said Erica Shenoy, the system’s medical director of infection control. “One question we all have is, ‘Where is this going? Will we settle into a typical respiratory season where things will settle out?’”

Flu is notoriously unpredictable in the public health field, but experts monitoring its trajectory say it appears to be in line with previous flu seasons and has started to decline early because it started early. The share of outpatient visits with respiratory illness has fallen below baseline levels in parts of the country, including the Upper Midwest, Great Plains and south central United States, the CDC said Friday.

“Now the question is: Are we going to have a typical spring or a late season influenza B surge?” said Scott Hensley, a microbiologist who tracks flu viruses at the University of Pennsylvania’s Perelman School of Medicine. He urges people who have not received flu shots to do so because Americans have less immunity, given the low numbers of influenza B cases in recent years.

It’s important for public health experts and the media to be transparent but not alarmist in their messaging and reporting, said David Rubin, a pediatrician who tracks national respiratory virus trends as director of PolicyLab at Children’s Hospital of Philadelphia. The public fixation on a “tripledemic” was always something of a misnomer, he said, because viruses typically don’t surge simultaneously, but ebb and flow as they compete for hosts.

“It can become like crying wolf,” he said, “and if there really is another public health emergency like a novel pandemic, will people listen?”

Jacqueline Dupree and Dan Keating contributed to this report. 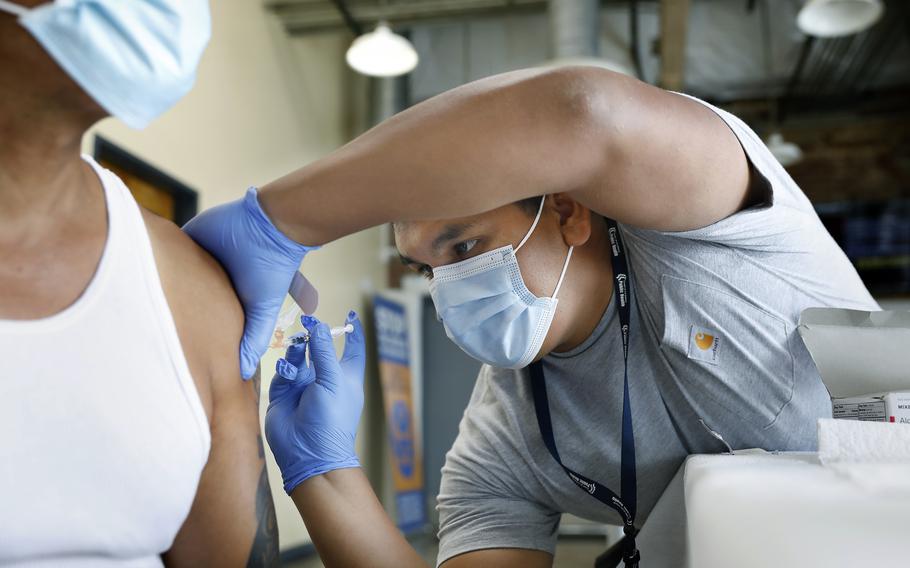 A registered nurse with the Los Angeles Department of Public Health administers a COVID-19 booster at a vaccination clinic at The Village Mental Health Services in Los Angeles in August 2022. (Christina House, Los Angeles Times/TNS)