‘He was a force of nature’: Biden remembers former Defense Secretary Ash Carter during memorial ceremony President Joe Biden and Secretary of State Antony Blinken look toward the urn with the cremated remains of former Defense Secretary Ash Carter during a memorial service for Carter at the National Cathedral in Washington on Thursday, Jan. 12, 2023. (Andrew Harnik/AP)

WASHINGTON — President Joe Biden honored the late former Defense Secretary Ash Carter at a memorial service Thursday and said he was a man of integrity who blazed new paths in the Pentagon and busted through red tape to make the military the finest fighting force in the world.

“This is beyond my capacity to accurately assess the incredible man Ash was,” Biden said during the ceremony at the Washington National Cathedral. “Ash was a force. He was a force of nature.”

Carter died of a sudden heart attack on Oct. 24 at the age of 68. He became former President Barack Obama’s fourth defense secretary in early 2015 and served in the post until Obama’s final day in office in January 2017.

During Carter’s time in the Pentagon, he opened all military roles to women, lifting the final barriers to female troops serving in every combat position. His administration also allowed transgender Americans to serve — and saw value in sending military aid to Ukraine, many years before Russia carried out its invasion.

“His genius was evident, his integrity was unfailing and his commitment to service before self was literally inspiring,” Biden said. “To lose someone you love so suddenly — someone who should have had so many years ahead of them — the suddenness, in my view, magnifies the grief. It makes it just inescapable.” 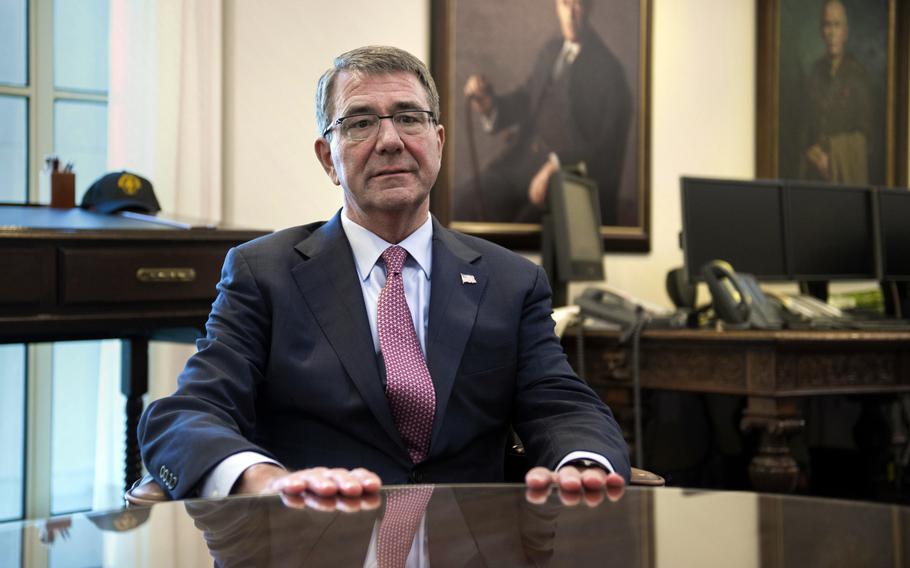 Former Defense Secretary Ash Carter is interviewed in his Pentagon office pn Jan. 18, 2017. President Joe Biden and other past and present U.S. officials paid tribute to Ash Carter, the late defense secretary who opened the way for women to fight in combat and transgender personnel to serve, at a memorial service Thursday., Jan. 12, 2023. Carter, 68, died in October of a heart attack. (Cliff Owen/AP)

“Ash always put the troops first,” said Austin, who spoke after Biden. “America is more secure because of Ash’s intellect and leadership. But, above all, Ash’s loved ones will remember him for his huge heart.”

Carter had said one of his most meaningful achievements in the Pentagon was breaking through red tape and speeding the creation of an improved armored vehicle to better protect troops from roadside bombs. That led to the Mine-Resistant Ambush Protected vehicle, of which more than 24,000 were sent to Afghanistan and Iraq.

During Biden’s remarks Thursday, the president sought to comfort Carter’s family. He died just a few months before the arrival of his first grandchild.

“I wish so deeply that Ash had lived to enjoy the new honorific [title] he was looking forward to — being a grandfather,” Biden said. “But he’s smiling right now, looking down.”

“We all will forever bear the imprint of Ash Carter, thank God,” Biden said. “May God bless Ash Carter, dear friend, great American. And may God continue to protect our troops, who Ash so loved and loved him back.”