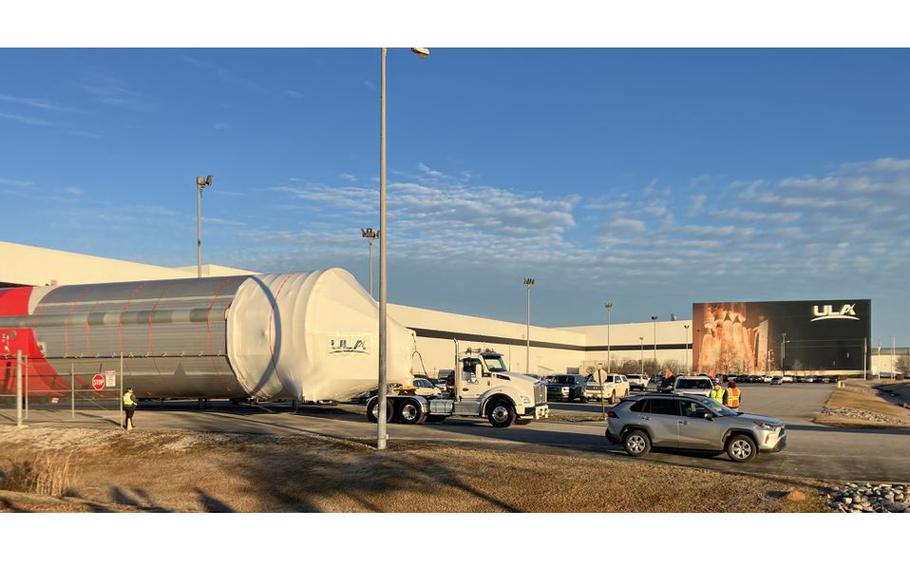 United Launch Alliance’s big new Vulcan rocket rolled out of the Decatur, Ala., plant bound for a barge ride down the Tennessee and Mississippi rivers and eventually to Cape Canaveral, Fla., for ground tests and launch later this year. (Lee Roop, al.com/TNS)

(Tribune News Service) — The first of United Launch Alliance’s big new Vulcan rockets left the factory near the Tennessee River in Decatur, Ala., on Tuesday bound by barge for Cape Canaveral, Fla., and a critical certification test flight this year.

The roughly 200-foot-tall rocket is the centerpiece of ULA’s future launch business with 70 already sold. Vulcan launches are lifted off the ground by two main engines built by Blue Origin’s engine plant in Huntsville.

Many of those missions will be to put Amazon’s new Project Kuiper satellites into space to deliver what the company says will be “fast, affordable broadband (for) unserved and underserved communities around the world.”

“This is our future,“ ULA Vice President for Development Mark Peller said in Decatur Tuesday. “It’s the start of a new era for ULA.”

To meet what Peller called an unprecedented demand for the new rocket will mean adding 500,000 square feet to the already large Decatur plant. The company says it also means “sustained work output and staff for years to come.”

The first Vulcan rolled out Tuesday will be ground tested at Cape Canaveral before an inaugural flight planned for the end of the year. That will be a national security satellite launch for the U.S. Space Force.

Boeing opened the Decatur factory in 1999 to build Delta rockets to launch large military and national security satellites. The production rate was 8 to 12 rockets per year. Boeing and Lockheed Martin teamed up in 2006 to form ULA.

“We’re going to be ramping up in a few years to 20-25 rockets a year,” Peller said. He said doubling the existing production rate is “a big challenge but the team is up to it.”

The bigger challenge, Peller said, is, “Everything we do from here forward is for the first time. It’s not the first time we’ve done it in (earlier rockets) Atlas and Delta, but Vulcan’s a new rocket.”

But before it can turn full attention to production, Peller said, “We’ve got to get this rocket flying. We need to take our time, follow our processes and procedures and make sure that first launch is a success.”

Finding the workforce to build the planned rockets won’t be a big challenge, Peller said. “There’s a great workforce here in the north Alabama area, but we’re also drawing people from the rest of the country.

“It’s a good place to live,” he said, “and there are a lot of advantages to this area. We’ve not had a challenge attracting people. We’re not an island here. We’re part of a larger aerospace market in north Alabama.”