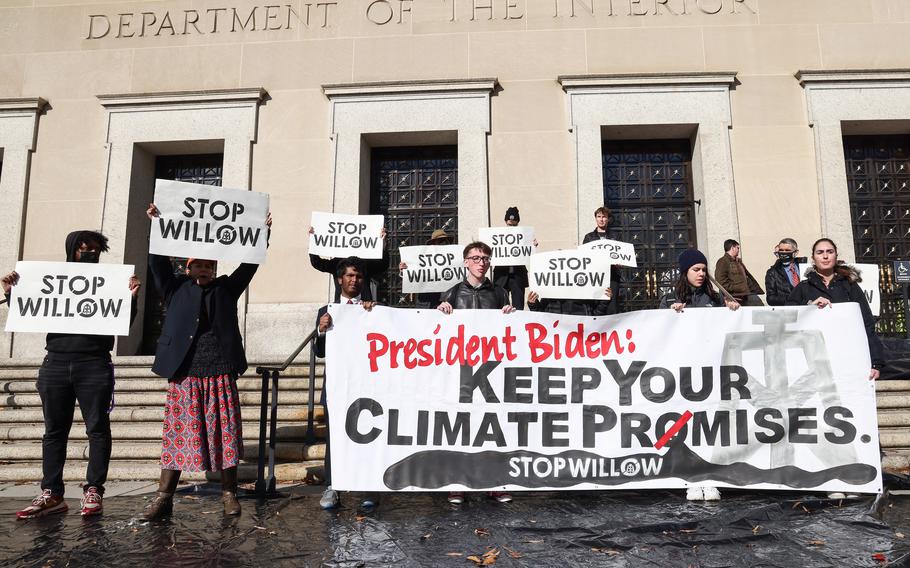 Climate activists hold a demonstration to urge President Joe Biden to reject the Willow Project at the US Department of Interior on Nov. 17, 2022, in Washington, D.C. (Jemal Countess/Getty Images for Sunrise AU/TNS)

(Tribune News Service) — A major oil prospect on federal land in Alaska is hanging in the balance as pressure mounts on the Biden administration for a final decision to approve, or reject, the project.

Conservation groups and climate activists have urged the administration to deny ConocoPhillips the permission it needs to build the $8 billion Willow oil project. National groups protested outside the White House earlier this month, arguing the project will imperil wildlife like polar bears and undermine President Joe Biden's goals to combat climate change.

The project's advocates, including Alaska's bipartisan congressional delegation, are calling for approval from the administration so construction can start immediately during the North Slope's short winter season, or else it will be delayed until next year. They say the project is vital for the struggling Alaska economy and could combat future high oil and gas prices.

Alaska Native leaders are also weighing in, both in favor and against.

Political observers say they don't know where the Biden administration will land, saying the president is in a tough political position.

ConocoPhillips has said it will begin construction as soon as the administration makes a decision supporting development.

"Any further delay (at Willow) is unwarranted" after five years of environmental review of the project, the company said in a statement Thursday.

Additional delay "jeopardizes ConocoPhillips' ability to initiate construction of the project in this winter season and further advance major contract awards that are needed to execute the project," the company said.

Also, this month, ConocoPhillips Alaska President Erec Isaacson signaled in an interview with Bloomberg that the company will back out of the project if the Biden administration scales the development down to two drilling locations, called pads.

ConocoPhillips said the "viable path forward" is a development proposal with three initial drilling pads, a plan the federal government proposed this summer. That plan arose after a federal judge rejected initial approval of the project by the Trump administration in 2020, after conservation groups argued that the government had underestimated the plan's harm to wildlife, among other factors.

If built, Willow would be one of the first oil fields in the National Petroleum Reserve-Alaska. The reserve, which is the largest block of federal land in the U.S., was established by President Warren Harding in 1923 as a source of oil for the U.S. Navy. But commercial oil didn't flow from the reserve until ConocoPhillips established its first small field there in 2015.

The Willow field could produce 600 billion barrels of oil over three decades, worth $50 billion at today's oil prices. Its oil could also lead to the release of 278 million metric tons of carbon dioxide emissions during that time, equivalent to what 76 coal-fired power plants emit in a year, conservation groups say.

The administration has committed to releasing a final environmental report for the project before February, and a final decision before March, according to the delegation's statement.

In September, the delegation had implored the administration to approve the project by year's end.

Spokespeople with the Interior Department declined to comment on the current timeline for a decision.

"We have nothing to offer on this," said Melissa Schwartz, communications director with the agency.

Sullivan said the timeline is "disappointing" and limits the development that could begin in the four-month construction season that begins in January. Work that can't happen this year will need to wait until early next year.

"Even the news today was, in my view, somewhat disappointing because you're getting into the middle of the construction season," Sullivan said Wednesday.

Climate activists in early December protested at the Ellipse outside the White House, unfurling a bright-yellow banner that said "Stop the Willow Oil Project."

"Our recent climate wins, the clean energy advancements we've made, President Biden's 2030 goals — they're all for nothing if the administration approves this colossal drilling project," said Magnolia Mead of This is Zero Hour. "Youth turned out to elect President Biden and Democrats because of their ambitious climate promises, and all eyes are on him to follow through."

Rosemary Ahtuangaruak, Nuiqsut's mayor, wrote in an opinion piece in The Hill last month that her village, the closest to the project, is being ignored as Biden "barrels towards approving" it.

"The Biden administration is moving forward with a massive oil and gas project that is a climate disaster waiting to happen while refusing to listen to the voices of my constituents and community, who will bear the burden of this project with our health and our livelihoods," she wrote.

"We are tired of outside groups trying to turn this project and every other oil and gas project in our region into the poster child for a global movement away from fossil fuels," they wrote. "This is more than a political oil debate for us; it's about access to land we were promised many years ago. Without projects like Willow and their crucial economic benefits, many of my neighbors would be forced to leave the lands they and their ancestors have inhabited for thousands of years."

'A tough spot' for Biden

Observers of oil field activity and federal policy in Alaska said they weren't sure where the Biden administration would land on Willow.

The Bureau of Land Management and ConocoPhillips have worked together to find a way to reduce harm to the environment that would have been caused by an original development plan proposed by the oil company, he said.

"I think they've done as much as they can do to mitigate the impacts" through the project's design, said Mack, chief executive of Kuukpik, the Alaska Native village corporation for Nuiqsut, and an oil field services provider.

Mack said Willow is an "economic opportunity" for Alaska. But it is "immense" and will have environmental impacts, he said. Kuukpik will push for improvements, such as urging the federal government to require electronic monitoring of caribou in the area to provide details on their status, he said.

Pat Pourchot, the former top Interior official in Alaska for six years under President Barack Obama, said in an interview he thinks Biden is "under a lot of pressure" on Willow.

Biden has set ambitious goals to reduce carbon emissions, but the Willow project will increase those emissions, he said.

That creates a contradiction in policy, something emphasized by conservation groups, said Pourchot, board president for the Alaska Wilderness League, which was part of the legal effort that stopped Willow's approval under the Trump administration.

Pourchot said the administration also has political calculations to consider in a Willow decision.

That includes future support that might be needed from Sen. Murkowski, a moderate who at times has been a critical swing vote on issues that Democrats favor.

And Democratic leadership will want to support Peltola politically, who they'll need in two years to regain control of the House, he said.

"The Biden administration is in the crosshairs between his own policies and on the political side," Pourchot said. "I think Biden is in a tough spot and I don't know what he'll do on Willow."