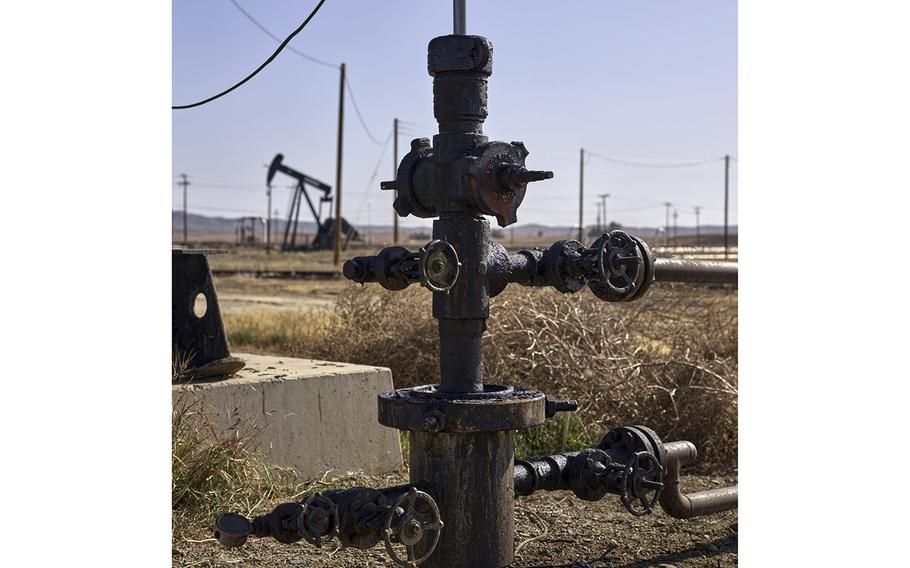 An oil well valve at the Coalinga Oil Field in Coalinga, California, on April 29, 2022. (Ian Tuttle/Bloomberg)

Some Biden administration officials are growing concerned that their plan to cap the price of oil purchased from Russia may backfire, according to people familiar with the matter.

The plan seeks to keep enough Russian supplies on the global market to stave off a spike in worldwide oil prices, but the proposal has been complicated since its inception and the subject of intense diplomacy with European allies. Its prospects have now been potentially undermined by the OPEC+ move to slash production by 2 million barrels per day, the people said.

Nonetheless, the proposal is viewed as the best choice among bad options to curtail Russia's oil revenues and financing for its war in Ukraine and is moving forward, one person said.

But some officials are worried that the OPEC+ production cut has increased volatility in markets, and a U.S.-driven move to cap Russia's oil prices could instead result in a spike.

Administration officials, who have held meetings nearly every day to work out implementation of the price cap, are also increasingly worried that Russian President Vladimir Putin may retaliate by cutting off supplies, one person familiar with the matter said. The people asked not to be identified because of the sensitivity of the matter.

The White House and the Administration "are full steam ahead on implementing a price cap on Russian oil with strong support from the G-7 and other partners. It is the most effective way to ensure that oil continues to flow into the market at lower prices and supply meets demand."

Brent crude, the global oil benchmark, rose to $92.92 a barrel on Thursday. Prices have been volatile this year, soaring toward $140 in the initial aftermath of the Russian invasion, only to slide in the third quarter as concerns mounted about a worldwide slowdown.

Russian Deputy Prime Minister Alexander Novak said after the OPEC+ decision that "the price cap creates a very bad precedent and will primarily hit the ones who are actually doing it. This mechanism is unacceptable to Russia."

Putin has said his country won't sell oil to any nation that participates in the price-cap plan.

The OPEC+ cut has been met with outrage from U.S. officials. President Joe Biden on Tuesday accused Saudi Arabia, the most influential member of the cartel, of siding with Russia with the announcement. Some Democrats have suggested that the timing of the cut, a month before U.S. congressional elections, was intended to hurt their party by raising gasoline prices.

The kingdom said in a statement Wednesday night that the decision was based only on its "noble objectives" to keep global oil prices stable and that it affirmed its strategic relationship with the U.S..

Oil prices have cooled since capping their biggest weekly gain since March after the OPEC+ decision. The Biden administration earlier this year warned that oil prices could hit $140 a barrel without the price cap, which is designed to keep Russian oil on the market.

U.S. officials continue to work on the price-cap plan internally and with allies. Treasury Secretary Janet Yellen "will redouble efforts to advance a price cap on Russian oil," the department said in a statement released Tuesday outlining her engagements during this week's International Monetary Fund meetings in Washington.

The administration's price cap plan is designed to alleviate an expected tightening of supplies once European Union restrictions on Russian sales take effect later this year.

The EU has banned imports of Russian oil and will also prohibit its companies from providing financing and insurance services for seaborne cargoes of Russian petroleum, starting Dec. 5 for crude and Feb. 5 for refined products. The EU will also ban its companies from providing shipping services for Russian oil, contingent on the G-7 implementing the price-cap plan.

The cap regime would allow buyers of Russian oil to access European services, but only if their purchase price falls below caps set by the U.S. and its allies. That level hasn't yet been determined, with discussions to hammer out the details expected later this month.

Nevertheless, it appears less likely that the U.S. and allies will succeed in cutting off oil revenue for Putin's regime and his Ukraine invasion, one of the people said.

Another significant roadblock to the plan, the people said, remains getting approval from all European Union member states.