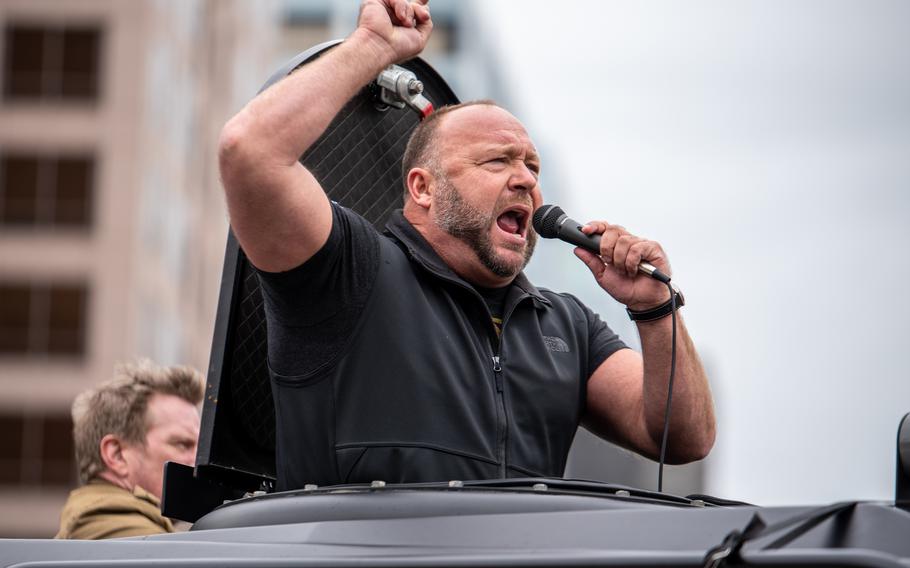 In this file photo, Infowars host Alex Jones arrives at the Texas State Capital building on April 18, 2020 in Austin, Texas. The protest was organized by Infowars host Owen Shroyer who is joining other protesters across the country in taking to the streets to call for the country to be opened up despite the risk of the COVID-19. (Sergio Flores/TNS)

HARTFORD, Conn. — In a short and pointed ruling, the judge who presided over conspiracy theorist Alex Jones’ Connecticut Sandy Hook defamation trial on Thursday rejected his arguments that the jury’s $1.4 billion damages award should be reduced and a new trial ordered.

The six-page decision by Superior Court Judge Barbara Bellis means the jury verdict returned at the conclusion of a two-week trial in September and October stands and what Jones has signaled will be years of appeals can begin.

Jones, through his lawyer Norm Pattis, had argued that the jury’s potentially record-setting damages award was excessive and based on emotion rather than evidence. And he asked that the verdict be set aside, arguing that the cumulative weight of Bellis’ rulings against Jones both before and during trial amounted to a “complete abdication” of the court’s duty to assure a fair trial.

In her decision, Bellis said Jones’ post trial motions to reduce damages and win a new trial were “conclusory” and “unsupported by any evidence or case law,” or “largely conclusory and not adequately briefed.”

The judge also pointed to decisions by Jones, based on what he criticized as adverse rulings by a “kangaroo court,” not to testify in his defense and to forgo most cross examination of witnesses against him.

“The court rejects these arguments, as well as the other arguments put forth by the defendants, who chose to conduct limited cross examination of the plaintiffs’ witnesses and to ‘boycott’ the trial,” Bellis wrote.

Pattis called Bellis’ ruling “disappointing but hardly surprising given the course of proceedings in the case.”

Jones and his broadcasting and retail sales business, Free Speech Systems, were sued by 15 people in Connecticut — parents, spouses and siblings of the 20 first graders and six educators murdered when a gunman shot his way into Sandy Hook Elementary School in Newtown with an assault rifle, and an FBI agent who was part of the law enforcement response on Dec. 14, 2012.

They claimed their lives were shattered by threats and harassment from complete strangers who believed years of bombastic broadcasts to an audience of millions claiming, falsely, that the shooting was staged and they, along with their murdered children, were actors in a hoax perpetrated to win support for outlawing gun ownership.

The families presented evidence that Jones had audience and sales data that showed both increased dramatically when he used his Infowars program to promote the phony conspiracy theory.

Because of a rare default ruling by Bellis, the defamation trial was actually a hearing on damages. The default punished Jones for failing to comply with court orders to disclose business records and found in favor of the families on the central point of their suit — that Jones’ hoax broadcasts were outrageous lies and were responsible for a decade of harassment and anguish.

Jones argued in his post-trial motions that the default prevented him from presenting a vigorous defense and limited what he could argue to minimize damages. As a result, he said the only question before the jury was what Jones owes.

“Here the overwhelming evidence of the plaintiffs’ injuries and damages, in conjunction with the courts instructions on the law … clearly support the verdicts rendered by the jury,” Bellis wrote. “The size of the verdicts, while substantial, does not so shock the sense of justice as to compel the conclusion that the jury was influenced by partiality, prejudice, mistake or corruption, but instead falls within the necessarily uncertain limits of just damages to be determined by the jury.”