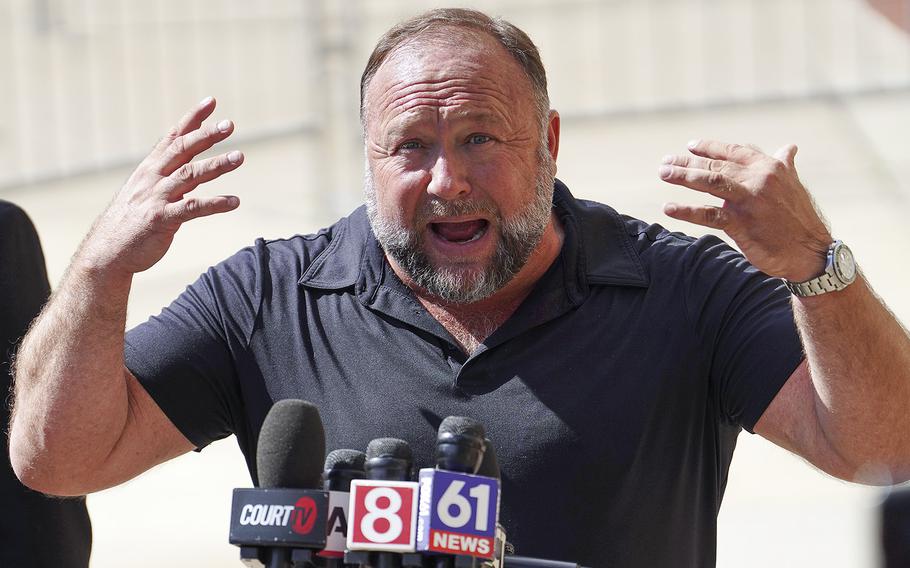 InfoWars founder Alex Jones speaks to the media outside Waterbury Superior Court during his trial on Sept. 21, 2022, in Waterbury, Connecticut. (Joe Buglewicz/Getty Images/TNS)

HARTFORD, Conn. (Tribune News Service) — The Sandy Hook families who won nearly $1 billion from far-right broadcaster Alex Jones want another $320 million or so more to cover their legal costs, along with court orders that would force him to produce an accounting of his assets and block what they describe as his "fraudulent" attempts to conceal them.

The $320 million or so for legal fees and expenses — should Superior Court Judge Barbara Bellis accept the figure — would comprise one category of punitive damages the jury awarded against Jones on Oct. 12. The jury also said Jones is liable for another yet-to-be determined and potentially far greater punitive award for violating the state's unfair trade practices law, known by the acronym CUTPA.

Punitive damages are awarded for especially egregious behavior. They are separate from the $965 million award, which the jury said is compensation for the relatives and one first responder who sued Jones for a decade of abuse from people who believe his claims that the 2012 school massacre was a hoax and they are actors in a scheme contrived by opponents of gun ownership.

The hearing Friday ended without a resolution and will resume Monday, when Bellis said she will hear arguments about both legal and CUTPA punitive damages. Lawyers for the families have provided Bellis with a calculation suggesting CUTPA punitive damages of $2.75 trillion are reasonable based on the hundreds of millions of times Jones' Sandy Hook denials were accessed, repeated and shared on the internet.

Bellis will decide the amount of both punitive damage awards in coming weeks.

Lawyers following the case have said no one believes Jones will produce billions or trillions of dollars in damages. But if a high damage award survives an appeal and Jones' anticipated moves in bankruptcy court, they said aggressive collection efforts could put him in the position of having to give up most of what he has and much of his future income.

An economist testified in a related suit in Texas last summer that Jones and his principal business, Free Speech Systems, are worth as much as $270 million, an estimate that Jones said is too high. Jones has put the company into bankruptcy, but has not filed for personal bankruptcy.

The family lawyers, the Bridgeport firm Koskoff, Koskoff and Bieder, said in a filing with the court that they are basing the claim for legal costs on a one-third contingency agreement with the 15 plaintiffs in the suit. In addition, they said they had about $1.5 million in costs.

The costs involved, among other things, payments to expert witnesses, payments to Texas bankruptcy lawyers hired to combat Jones' attempts to delay the suit or protect assets, hundreds of thousands of dollars for electronic data collection, 38 depositions and travel.

The family lawyers also filed papers asking Bellis to issue orders that would set in motion what likely would be years of efforts to collect from Jones by attaching assets and compelling him to identify and, in some cases produce, everything he owns or expects to earn.

Jones' lawyer, Norm Pattis, has filed papers with the court indicating he intends to press an array of challenges — to Bellis' rulings before and during trial, to the verdict and to the calculation of damages by the plaintiffs.

In his filings with the court, Pattis said that because the jury delivered an extraordinary compensatory verdict of nearly $1 billion, Bellis should award only "nominal" punitive damages for legal expenses and CUTPA violations. Pattis also has filed motions asking that the verdict be set aside or reduced.

Bellis has set a schedule that suggests briefing and arguments about post verdict questions and damage awards could continue through the end of the year. Jones has promised repeatedly to appeal, but so far has done nothing to act on the promise.

Fifteen people sued Jones in the Connecticut case — parents, spouses and siblings of the 20 first graders and six educators murdered when a gunman shot his way into Sandy Hook Elementary School in Newtown with an assault rifle, and an FBI agent who rushed to the scene on Dec. 14, 2012. Within hours of the murders, as relatives came to grips with their losses, Jones began what would become years of bombastic broadcasts to an audience of millions claiming that the relatives were actors in a phony production staged to win support for gun control.

The relatives testified about being confronted by complete strangers, at their homes, at shopping malls and while walking along a city street 3,000 miles from Newtown. All said they were the targets of what one parent called a full-on assault on social media. The daughter of the murdered Sandy Hook Elementary School principal said she received rape threats in the mail. Another parent said a Sandy Hook denier threatened to dig up his son's grave to prove he had not been killed.

It was the second big verdict against Jones for spreading lies and harassing relatives of Sandy Hook victims. In August, a jury in Texas awarded nearly $50 million in compensatory and punitive damages to the parents of a murdered first grader who sued Jones there. A third suit is pending in Texas.

In February, relatives of Sandy Hook victims settled a lawsuit against the company that made the assault rifle used in the shooting for $73 million.