Congress has a $1.7 trillion bill to fund the government. Here’s what’s in it. 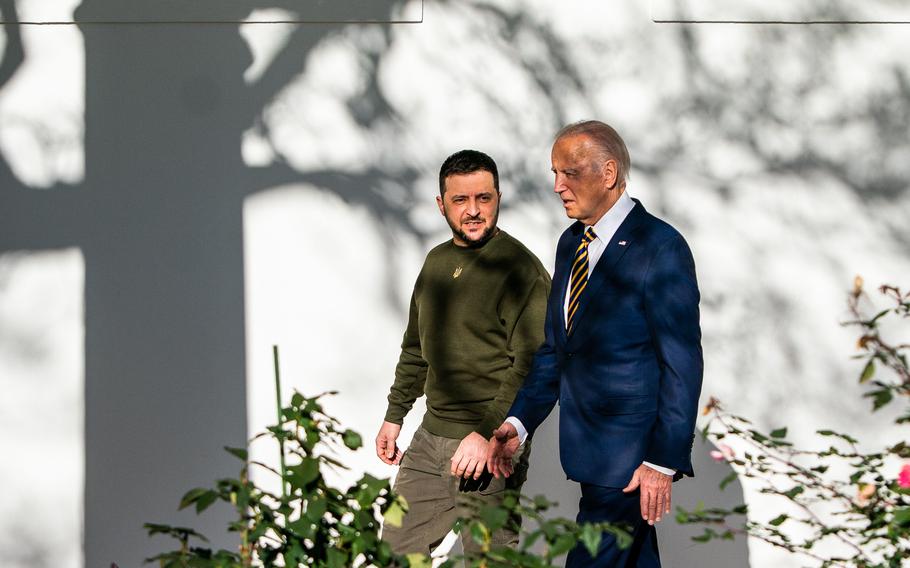 Congressional lawmakers hope on Thursday to finalize a bipartisan, roughly $1.7 trillion bill that boosts domestic and defense spending through most of 2023, funding the government and averting a catastrophic shutdown in the waning hours of the year.

The compilation of long-stalled appropriations bills, known as an omnibus, would provide nearly $773 billion for domestic programs and more than $850 billion for the military, covering expenses through fiscal 2023, which concludes at the end of September.

Lawmakers also added about $45 billion of emergency aid to Ukraine while using the must-pass measure as a vehicle to advance a slew of additional proposals — including an overhaul of how the country counts electoral votes in presidential elections.

A trio of negotiators — Sens. Patrick J. Leahy (D-Vt.) and Richard C. Shelby (R-Ala.) and Rep. Rosa L. DeLauro (D-Conn.) — released the 4,155-page omnibus in the early hours Tuesday morning after months of bipartisan talks. House Republicans largely sat out of those discussions, arguing that their counterparts in the Senate should not have negotiated with Democrats until next year, when the GOP assumes control of the House.

Prospects for swift passage dimmed late Wednesday night after Republicans demanded a vote to extend a controversial Trump-era immigration policy. Lawmakers have until the end of Friday to fund the government or key federal agencies and programs are set to shut down.

Here is what is in the bill.

The omnibus includes nearly $773 billion for a vast array of federal health-care, environment, labor, education and economic programs. Democrats say this domestic spending is $68 billion, or about 9 percent, more than they approved last year. It’s still less than what some Democrats wanted, but, nonetheless, it’s the “highest level for nondefense funding ever,” according to the House Appropriations Committee.

The bill raises by $500 the maximum Pell Grant, an award for lower-income college students. It includes the first budget increase for the National Labor Relations Board, a labor watchdog, in more than a decade. It provides $800 million for shelter and other emergency services for migrants at the Department of Homeland Security, with additional sums meant to improve refugee processing. And it boosts funding for arts programs, tech and antitrust watchdogs, and security for members of Congress.

The Food and Drug Administration received $3.5 billion, an increase of nearly a quarter-billion dollars, as lawmakers sought to address supply chain and safety issues that caused a shortage of baby formula this year. The Department of Veterans Affairs received more than $134 billion, which includes a significant amount of new money for former service members’ health care. And the Justice Department received nearly $39 billion, a $3.5 billion increase from fiscal 2022, which funds more federal grants to state and local law enforcement and new work at the FBI to investigate violent extremism and domestic terrorism.

Earlier this month, Congress adopted an approximately $850 billion law authorizing key Pentagon programs. But that measure, the National Defense Authorization Act, essentially just set funding levels; it did not write the check. That is part of the appropriations process, and Democrats and Republicans agreed to fully fund defense as part of the omnibus.

Shelby, the top GOP lawmaker on the Senate Appropriations Committee, said it amounted to a 10 percent increase in defense funding from the previous year. That satisfied Republicans’ leading demand in talks.

The money covers a wide array of new spending areas and initiatives, including a 4.6 percent pay raise for service members. There’s money to build 11 Navy ships, restore 19 joint strike fighters and repair a roster of other aircraft. The Defense Department also would see what Republicans described as the largest-ever research and development budget — $139.7 billion, which would fund work on new war-fighting technologies, such as hypersonic missiles.

Scattered throughout the omnibus are pockets of money that fund key elements of the president’s recent legislative accomplishments.

Lawmakers agreed to spend more than $58.7 billion to carry out work to implement the $1.2 trillion infrastructure law, a bipartisan measure adopted last year that aims to improve the nation’s roads, bridges, pipes, ports and internet connections. That includes, for example, more than $10 billion to improve the nation’s water, a $347 million increase from the previous year.

There’s an additional roughly $1.8 billion to carry out key elements of the Chips and Science Act of 2022, much of which would flow through the Defense Department. The bill, approved this year, aims to boost the domestic manufacturing of tiny yet powerful computer chips, known as semiconductors.

The bill includes a raft of fresh emergency aid, starting with about $44.9 billion of military, economic and humanitarian assistance related to Ukraine, more than the Biden administration had requested. Lawmakers delivered the aid the same week Ukrainian President Volodymyr Zelensky addressed Congress.

Some of the money would support Washington’s policy work on the Russian invasion while replenishing U.S. stocks of equipment provided to Ukraine. But significant portions of the funds — channeled through the Defense and State departments — provide direct help to the Ukrainian military while responding to humanitarian needs, including refugee and food security support.

Domestically, lawmakers secured $27 billion to respond to recent natural disasters, including Hurricane Fiona, which struck Puerto Rico, and Hurricane Ian, which devastated Florida. The money also supports federal responses to other extreme weather — with $1.8 billion to address flood resilience, for example, and $1.45 billion in response to recent wildfires in New Mexico.

But Congress didn’t deliver on one of Biden’s top requests: More than $9 billion in the fight against the novel coronavirus. For more than a year, the administration has pleaded for more money to boost testing, treatments and vaccines, only to be stymied by GOP opposition, as Republican lawmakers insist that the money is not needed.

The sweeping government funding package sets in motion a plan to wind down pandemic-era Medicaid rules, which have prevented states from kicking people off the safety-net program providing health insurance to low-income Americans.

Starting in April, state officials can begin reevaluating who is still eligible for Medicaid — a priority for Republicans — with some guardrails over the process. But that’s coupled with long-sought Democratic priorities, including allowing states to permanently extend Medicaid coverage to new mothers for 12 months and prohibiting children from losing Medicaid or Children’s Health Insurance Program coverage for a continuous 12 months, even if their family’s income fluctuates.

Lawmakers also clinched a deal to avert a lapse in critical money for Medicaid programs for U.S. territories. The agreement maintains the rate at which the federal government has been paying to match Puerto Rico’s Medicaid money for five years, and it permanently extends that rate for the other U.S. territories — a key measure to bring funding certainty to the fragile programs.

Congress is beefing up efforts to prepare for the next pandemic. The legislation includes efforts to improve disease data collection, bolster the nation’s stockpile of medical and protective supplies, and require the Senate to confirm the director of the Centers for Disease Control and Prevention starting in 2025.

But a proposal from Sens. Patty Murray (D-Wash.) and Richard Burr (R-N.C.) for an independent task force to probe the origins of the novel coronavirus and the resulting pandemic response did not reach the final bill.

The bill provides $10 billion for the Environmental Protection Agency, a $576 million increase from current funding levels. It also allots $46.5 billion to the Energy Department, an approximately $1.7 billion increase but less than House and Senate appropriators wanted.

It also makes some policy changes. The Maine congressional delegation, for example, secured provisions to help lobstermen by delaying the release of stricter rules aimed at preventing whales from becoming entangled in fishing lines. But environmentalists warn that the delay could push the critically endangered North Atlantic right whale to the brink of extinction.

The spending deal also includes a version of a bipartisan bill that seeks to help farmers store planet-warming carbon emissions on their land. The Growing Climate Solutions Act passed the Senate last year by a 92-to-8 vote but stalled in the House.

The omnibus includes a critical change to election laws that Democrats and Republicans drafted after the Jan. 6, 2021, attack on the U.S. Capitol, in which supporters of President Donald Trump tried to stop the process certifying Joe Biden as the winner of the election. This week, the House panel investigating the attack recommended criminal charges against Trump.

The measure is the Electoral Count Reform and Presidential Transition Improvement Act, chiefly written by Sens. Susan Collins (R-Maine) and Joe Manchin III (D-W.Va.). It changes the way presidential electoral votes are counted, making it harder for lawmakers to object to a state’s electors.

The bill would require most businesses to enroll employees automatically in 401(k) retirement savings plans, increasing contributions annually until workers were saving at least 10 percent of their pay. Workers making less than $71,000 a year would get a 50 percent federally funded match for up to their first $2,000 of savings. Companies could allow employees to link an emergency savings account to their retirement plans. And the age for mandatory withdrawals from retirement plans, currently 72, would increase to 73 and, eventually, 75.

Government-owned phones and related devices would be barred from installing the video app TikTok under the bill, thanks to a provision crafted by Sen. Josh Hawley (R-Mo.). Hawley and other Republicans have lambasted TikTok — and its Chinese-based parent company ByteDance — for what they say are security and privacy practices that risk allowing user data to fall into Beijing’s hands.

Democrats wanted to expand the child tax credit after an enhanced version of the program — which paid monthly sums to lower-income families — expired at the end of last year. Republicans wanted to extend tax breaks that benefit businesses and boost research and development, a key element of their party’s 2017 tax overhaul.

Neither party was willing to accept one without the other, and the two sides could not find common ground on what would have been an expensive, sweeping year-end tax-policy deal. That fight now awaits lawmakers in the new year, when partisan tensions are sure to run even higher.