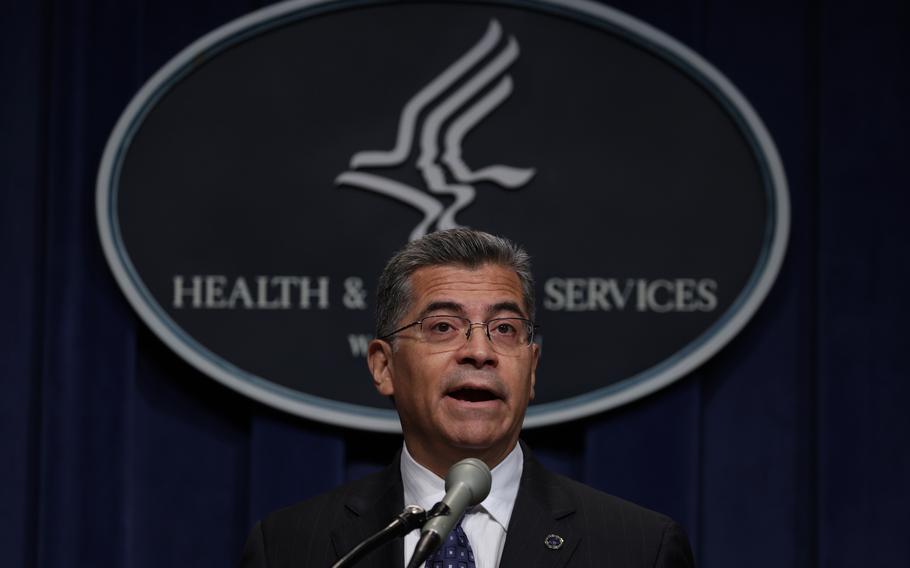 In this photo from June 28, 2022, U.S. Secretary of Health and Human Services Xavier Becerra speaks during a news conference at the headquarters of HHS in Washington, DC. Secretary Becerra held a news conference "to unveil an action plan at President Biden's direction" in response to the Supreme Court‘s 6-3 Dobbs v. Jackson Women's Health decision. (Alex Wong/TNS)

Colorado on Dec. 5 became at least the fourth state to seek federal permission to use the strategy, following Florida, New Hampshire, and New Mexico.

President Joe Biden has endorsed the approach, but his administration has yet to greenlight a state plan.

“States have done the work, and the only thing preventing them from going ahead is the Biden administration,” said Jane Horvath, a health policy consultant who has worked with states on importation plans.

Health and Human Services Secretary Xavier Becerra told KHN on Dec. 5 that the Biden administration welcomed applications for drug importation programs from Colorado and other states. But he would not pledge that the FDA would rule on any application in 2023.

Asked what his message was to states, he said: “Sign up and submit an application, and we will take a look and see if you are able to get through the process.”

Buyers in the United States pay among the highest prices in the world for brand-name pharmaceuticals. Drugs are generally less expensive in neighboring Canada, where the government controls prices.

Under President Donald Trump, the U.S. government declared that importing drugs from Canada could be done safely — satisfying a condition spelled out in a 2003 federal drug importation law. The Trump administration finalized rules in September 2020 for states to apply.

During his campaign for the White House, Biden said he would allow consumers to import prescription drugs from other countries if the federal government certified those drugs as safe.

After Biden took office in 2021, he ordered the FDA to work with states to import prescription drugs from Canada. In a speech last year about how he was going to reduce drug prices, he cited estimates by Colorado about how much money people in the state could save through importation.

Despite the administration’s public show of support, early applicants have been frustrated by the FDA’s inaction.

In November, about three months after Florida sued, the FDA sent Florida a 15-page letter asking it to fill dozens of gaps in its plan. The letter asked whether the state wanted to withdraw its application and submit another.

In a December court filing, Florida said “suddenly conjuring so many supposed defects” in its proposal was another “stall tactic” by the government.

New Hampshire Health and Human Services Department spokesperson Jake Leon said New Hampshire’s proposal was rejected because it did not identify a Canadian wholesaler that would provide the drugs. He said the FDA told the state it could reapply when it found one.

Other states have signaled interest in importation but have yet to seek federal approval.

The drug industry, wary that a government-organized importation program could eat into its profits, opposes the strategy and has argued it would circumvent controls that keep drugs safe in the United States.

The Pharmaceutical Research and Manufacturers of America, the drug industry lobby known as PhRMA, sued the federal government in 2020 to block drug importation. That lawsuit is still pending. The Biden administration has argued in court that the lawsuit is invalid because it’s unclear when, if ever, the administration would approve a state’s importation plan.

Many brand-name drugs sold in the U.S. are already made abroad. In addition, millions of Americans have purchased lower-priced drugs from Canada and overseas through online pharmacies and by visiting other countries.

Colorado officials said their proposal aims to save residents and employers an average of 65% off the cost of dozens of medications, including drugs for diabetes, asthma, and cancer.

Kim Bimestefer, executive director of the Colorado Department of Health Care Policy & Financing, told KHN the state wants to disrupt the current drug pricing system in which manufacturers can charge as much as the market will bear. The FDA told state officials it would take the agency six months to review its proposal, she said.

Colorado’s proposed plan would use an Ontario, Canada, wholesaler to send drugs through the border at Buffalo, New York, to an importer headquartered in Boise, Idaho. The drugs would be tested by an Ohio laboratory before being sent to pharmacies in Colorado and then sold to residents and employers.

Colorado will add safety checks for drugs brought in from Canada that go beyond those for drugs sold in the United States, Bimestefer said. “We are highly confident of their quality and bullish on the savings,” she said of the Canadian drugs.

Colorado’s application said the state’s importation strategy faces not only resistance from drug manufacturers but also concerns on the part of pharmacies and the Canadian government.

Canadian officials have opposed U.S. import plans because they fear the efforts could lead to drug shortages in Canada. However, Bimestefer said Colorado would bring in drugs only if ample supply exists for both countries.

The Colorado Business Group on Health, which includes large employers, strongly favors importation but realizes the Biden administration is under pressure from groups that profit from the status quo, said Robert Smith, the coalition’s executive director. He called concerns about patient safety a “red herring.”

“The one thing we know about health care is that it is driven by economic self-interests,” he said.