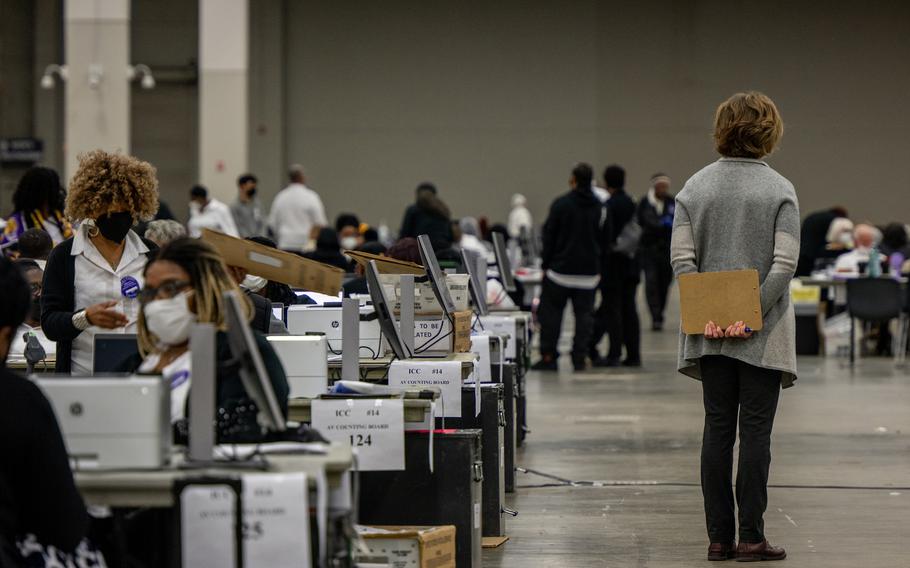 In this photo from Nov. 8, 2022, a poll challenger oversees election inspectors at the Huntington Place convention center in Detroit. (Brandon Bell/TNS)

The developments at the panel’s meeting marked another defeat for groups and individuals who have spread unproven claims of election fraud and dubious allegations that tabulators somehow altered votes in the battleground state.

“It does confirm that tabulators in these precincts were programmed correctly and counted the ballots correctly,” Brater told the bipartisan canvassing board of the recounts.

The partial statewide recounts were spurred by two nonprofit organizations that have worked to raise doubts about the integrity of elections: the Election Integrity Fund and Force in Michigan and the America Project, a Sarasota, Florida-based group that’s led, in part, by Patrick Byrne, former CEO of Overstock.com.

The America Project helped fund the deposit for the recount, which Brater said was about $100,000. The deposit didn’t cover the entire cost of the recount, Brater said. The remainder of the expense would fall to taxpayers.

Jerome Jay Allen of Bloomfield Township signed petitions for the recounts, touting unproven theories about election technology potentially altering votes. Daniel Hartman, a lawyer for the organizations pushing for the recount, said the intention of the effort was to check the election system.

But the recounts, which generally reflected the initial tallies, didn’t back up challengers’ ideas.

Tony Daunt, a Republican and chairman of the canvassing board, said the recounts should put to bed questions about tabulators, which have persisted since Republican Donald Trump lost the 2020 presidential election and falsely claimed the contest was stolen from him.

“Ultimately, since 2020, in particular, there’s a segment of the population that’s been deranged by Donald Trump’s nonsense, and it’s carried over into this cycle,” Daunt told reporters. “What’s positive is it’s a much smaller contingent of people.”

The recount of Proposal 3, which voters approved to enshrine abortion rights in the state constitution, encompassed about 626,000 votes across 43 counties. The recount initially found 116 additional yes votes and seven extra no votes, for a net gain of 109 yes votes.

On Proposal 2, which was approved to provide nine days of early voting, the recount included more than 59,000 votes in four counties. The Proposal 2 recount found an additional 14 yes votes and 20 no votes.

Brater said the small changes in results were expected because during a hand recount, officials often tally additional votes that might have been rejected by tabulators and because humans can make mistakes.

“Machines are very accurate,” Brater said. “That’s one of the reasons we use machines, not people.”

“For a volume of this many ballots, it’s not surprising to see a very small percentage difference in the hand count,” Brater said.

The canvassers — the board features two Democrats and two Republicans — rejected 118 challenges to various aspects of the recount process during the meeting on Wednesday. The challenges ranged from questioning the processes used by election officials to targeting Sharpie marks and ink color and suggesting pinkish marks found on some ballots in Genesee County could be signs of fraud.

One challenge asked for a ballot not be counted because it was marked with green ink. The canvassing board denied the challenge.

One of the 119 challenges to officials’ handling of the recounts, involving markings on a vote in Van Buren County, was accepted.

State canvassers said the recounts were focused on examining the tallies for Proposal 2 and Proposal 3 and considering investigations and overall policies fell outside their purview.

Mary Ellen Gurewitz, a Democratic canvasser, said the board was not going to be persuaded to issue subpoenas as some supporters of the recount effort wanted.

“If you want to go to court and argue that we have not fulfilled our responsibility, have at it,” Gurewitz said.

Hartman, who served as the lawyer for the groups that sought the recounts, said the canvassing board was obligated to conduct an investigation if there was a probable violation of state law. It was unclear Wednesday if Hartman’s side met that legal standard the lawyer attempted to identify.

At one point during the meeting, Richard Houskamp, a Republican canvasser, said the votes challengers were seeking to invalidate represented people who got up on the morning of Election Day, went to their polling place and voted.