As NASA's Mars InSight mission comes to an end, JPL engineers say farewell to its twin 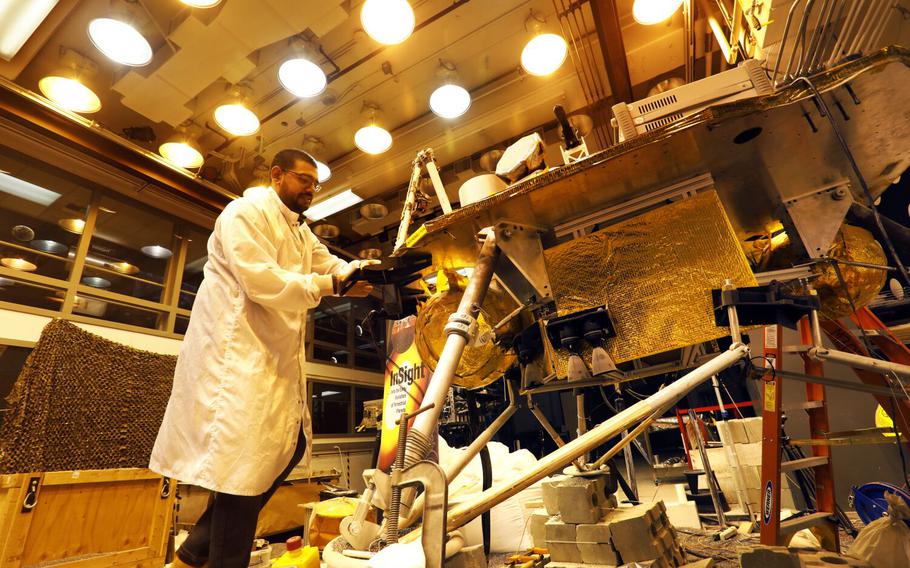 Pasadena, California -Dec. 7, 2022-Pranay Mishra, a systems engineer for NASA’s Jet Propulsion Laboratory, next to ForeSight, a model of NASA’s Mars InSight satellite, Dec. 7, 2022. NASA’s Mars InSight mission will likely end in January when dust covers the lander’s solar panels and it stops transmitting data. ForeSight has been put through all kinds of trials at JPL, and engineers are packing it up next week and putting it in storage now that the mission is expected to end. (Carolyn Cole, Los Angeles Times/TNS)

(Tribune News Service) — Pranay Mishra reached down to the floor of his workplace and scooped a handful of what might be the closest thing on Earth to the feel of Martian soil.

"This is actually unprocessed garnet," he said, sifting the gray granules in his palm. Tiny ruby-colored flecks caught the light. Mixed with diatomaceous earth, a fine powder of algae fossils often used by gardeners, the coarse gray stuff makes a decent substitute for the density and texture of Mars' dirt. The only difference is that on Mars, no one has to clean it up.

"I've torn up three pairs of shoes working in this," the JPL systems engineer said with a laugh. "It follows you home. It's in your car, it's in your house — it's everywhere."

At some point in the next several weeks, a critical amount of actual Mars dust will cover the solar panels of NASA's InSight lander, which has been studying the red planet's crust, mantle, core and seismic activity since 2018. The batteries won't generate enough voltage to keep the spacecraft's instruments online. When that happens, the lander will power itself down and the mission will officially come to a close.

That prospect also spells the end for ForeSight, Insight's counterpart at the Jet Propulsion Laboratory in La Cañada Flintridge.

For the past four years, ForeSight has been stationed in a bed of faux Martian soil the size of a suburban home's driveway, tilted at the exact same angle as its doppelganger more than 50 million miles away. Every move InSight has ever made has been tested hundreds of times or more on its terrestrial twin.

When InSight encountered problems on Mars, engineers put ForeSight through a barrage of troubleshooting exercises on Earth. It's had balloons tied on to mimic its weight in Martian gravity, and motion capture dots stuck to its frame to precisely measure its movements.

After InSight touched down on Elysium Planitia six months after its launch, JPL engineers donned virtual reality goggles loaded with images the lander sent back of its immediate surroundings. Then they got on their hands and knees and crawled around with gardening tools to shape the dirt in ForeSight's habitat into a perfect re-creation of the landscape around its sibling on Mars.

No human has laid eyes on InSight since it took off from what was then Vandenberg Air Force Base 4½ years ago. But ForeSight has been a constant work companion for the people tasked with making InSight a success.

Plans for the testbed began a few years before InSight's initial launch date in 2016. NASA robotics engineer Ashitey Trebi-Ollennu helmed the design, a task he began by imagining a finished spacecraft touching down on Martian soil.

"I see the lander on Mars," Trebi-Ollennu said. "I visualize that, and I play it backwards. What are the functionalities that I need?"

One of InSight's primary goals was to record seismic activity on Mars that might reveal new insights into the planet's internal structure. To do this, the lander had to deploy a basketball-sized seismometer sensitive enough to detect the movement of an individual atom, and then place a shield over it to protect the instrument from the elements.

Engineers used ForeSight to rehearse each step of the process hundreds — and sometimes thousands — of times, testing their procedure in an array of simulated conditions.

They installed a set of overhead lamps that bathed the testbed in a dim golden glow of a day on Mars, which gets less than half the sunlight that Earth does. To check how the lander's cameras would process sunlight — which scatters differently than artificial lighting — they rolled ForeSight into the parking lot.

For all its triumphs, the ForeSight testbed has also been a place of frustration.

InSight was equipped with a heat probe, nicknamed the "mole," that was supposed to burrow into the planet's crust to measure interior heat. When engineers watched the lander's video footage of its attempt to deploy the mole, they realized something was wrong: the 16-inch-long pile driver was hammering away, but wasn't getting anywhere.

For 22 months, instrument systems engineer Troy Hudson led the troubleshooting effort. With the replica positioned at the same angle as its Martian counterpart, and the Mars lights set to reproduce the conditions captured by InSight's cameras, engineers walked through countless alternatives that might solve the mole's problem.

They lifted ForeSight on a platform and brought in an extra box of fake Mars dirt for the replica probe to dig in. Again and again they tried alternative angles that might allow the mole to gain traction without damaging its delicate tether.

Ultimately, the soil beneath InSight's probe turned out of a different density and texture than planners had expected, and the mole was never able to get enough friction to dig more than a few centimeters. While that little bit allowed scientists to study the soil's thermal properties, they couldn't probe far enough into the crust to measure the planet's interior heat flow.

"My little piece of it didn't quite do everything we wanted it to do," Hudson said, which makes InSight's retirement feel bittersweet. "I was very emotionally invested in this mission."

Whatever emotions InSight and ForeSight evoke, practicalities have to come first. The testbed is being dismantled and its individual parts offered to other teams at JPL to repurpose for their own needs, Mishra said. Anything that isn't claimed will go into storage.

Over on Mars, when the voltage in InSight's batteries drops below the critical threshold, the lander will enter what its designers call "dead bus mode," said Bruce Banerdt, the mission's principal investigator.

Its computer will shut off. The electronics will stop working. Yet the circuitry that runs from the solar panels to the batteries — a relatively low-tech function that takes very little power to operate — will continue to operate indefinitely, keeping the batteries charged just enough to bring InSight back to life should some unexpected force come and clean those solar panels off.

In that scenario, the lander will reboot itself and transmit sporadic radio signals that will be heard through any other spacecraft communicating from Mars as a specific pattern of low-level noise, alerting engineers on Earth to its renewed activity.

Were all those things to happen — a possibility whose likelihood Banerdt places at 5% to 10% — InSight's mission would resume.

But there will be no attempt to resurrect ForeSight, which by then will be gone for good.

Though he's worked with the testbed longer than anyone else on the team, Trebi-Ollennu isn't sentimental about his brainchild being taken apart and boxed up.

"In our business, the hardware goes away. So my emotion is not to the hardware. It's to the people I've worked with and the contributions they've made — their toil and sweat, the disagreements and agreements," he said. "When I see this testbed, I see people."

Others see a colleague who is signing off for the last time.

"It's the end of the chapter," said Mishra, gazing fondly at the lander and its ever-present coating of fine gray dust. "For me, it's like a friend that I've worked with for such a long time is done."