The sun was 'smiling' in a NASA photo; it might be a warning for Earth 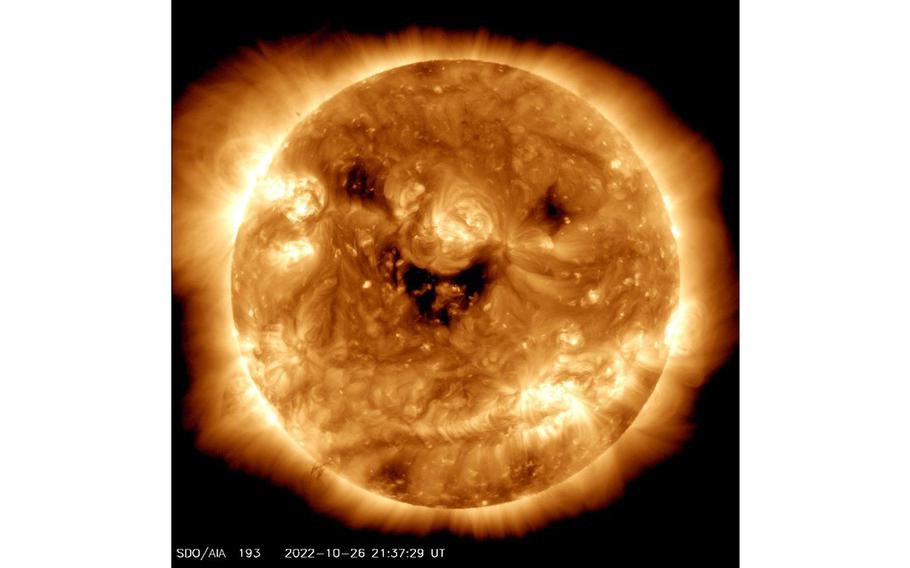 It turns out that anyone who drew a smiley-faced sun as a kid has been scientifically proved — somewhat — right. Last week, NASA's Solar Dynamics Observatory captured an image of the biggest object in our solar system looking like the Stay Puft Marshmallow Man from "Ghostbusters," the baby-faced "Teletubbies" sun or a jack-o'-lantern (if you're into the Halloween spirit).

But what looks like a Scrub Daddy sponge set ablaze might not be as cute as it appears. For us here on Earth, the solar emoji could produce a beautiful aurora sighting — or it could signal problems for the planet's telecommunications systems.

The sun is, in essence, "the largest nuclear reactor in our solar system," said Brian Keating, a physics professor at the University of California at San Diego. There's a flurry of action happening every second in the massive, spinning, glowing ball of hot gas — from the conversion of hydrogen into helium, which gives off the same amount of heat as several nuclear bombs, to electrical storms and sunquakes.

Some of that solar activity was photographed by NASA's satellite on Wednesday, Keating told The Washington Post.

In the image, the trio of patches that make up the "face" — which can't be seen with human eyes because they're in the ultraviolet spectrum — are what's known as coronal holes, or slightly cooler sections of the sun's outer layer, which usually has a temperature of about 10,000 degrees Fahrenheit.

"We're talking about a few hundred degrees, so it's not like some ski resort," Keating said. "But because they're so dark and because we're looking at it in ultraviolet radiation, which the naked eye can't see, the [NASA satellite] sees them as dark holes."

The coronal holes aren't just interesting shapes moving around the sun's surface. They're areas of high magnetic-field activity steadily sending solar wind — or a flow of protons, electrons and other particles — into the universe.

"More so than a smiley face, its eyes are like gleaming laser beams sending particles that can cause severe disruptions to the atmosphere on Earth," Keating said.

When the particles, which carry electrical charge, hit the planet in small doses, colorful auroras might follow, bringing brilliant displays caused by the atmosphere's gases interacting with the sun's burped-up shoots of energy. The problems come if a tremendous number of the teeny-tiny particles hit Earth, Keating said. Instead of being sucked into Earth's magnetic field, they could get picked up by radio antennae and disrupt radio, television and other communication channels. A severe solar storm could even damage electrical grids and cause power outages, Keating added.

While images of a smiling sun have been captured before — for instance, in 2013 after it "ate a comet" or in 2014 when NASA dubbed it a "Pumpkin Sun" — the worst-case scenario Keating described hasn't happened in almost two centuries. The last intense geomagnetic storm to affect Earth that much was the 1859 Carrington Event, which caused fires at several telegraph stations as auroras popped up in tropical regions.

A massive event like that is long overdue, he said.

"Scientists expect that to happen on average, with a couple percent probability, every year, and we've just dodged all these magnetic bullets for so long," Keating said. "So it could be really scary, and the consequences could be much more dramatic, especially in our technology-dependent current society."

The sun's particles from the latest smile event may reach Earth right on time for the ghostliest night of the year.

"There could be something on our way for Halloween night after all," Keating said. "Pretty spooky, but hopefully not too spooky."

The National Oceanic and Atmospheric Administration's Space Weather Prediction Center issued a minor geomagnetic storm watch Saturday, warning that conditions could change from "unsettled" to "active." The flare-ups of the coronal holes are expected to continue through Wednesday.