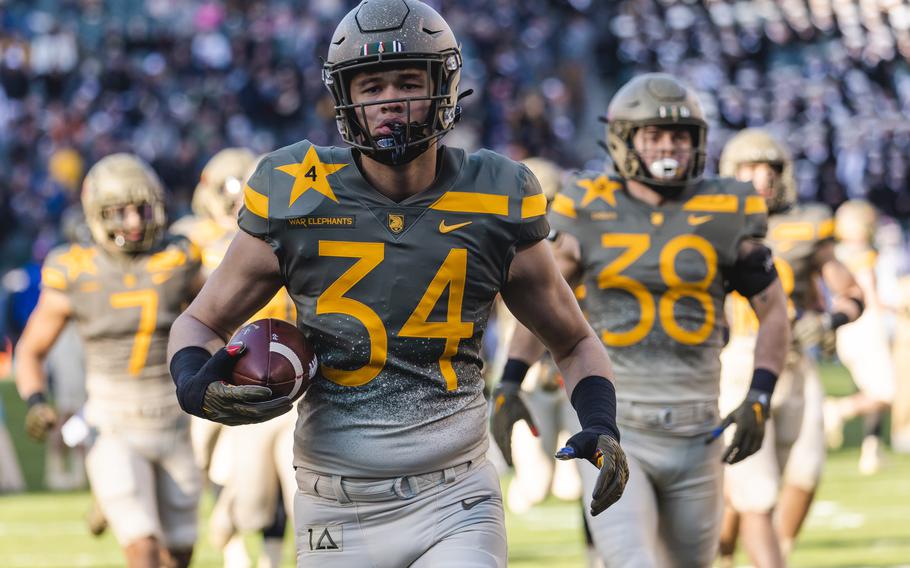 Army linebacker Andre Carter, shown at the Army-Navy game on Dec. 10 in Philadelphia, is projected to be a first-round NFL draft pick. (Tyler Williams/U.S. Military Academy/Flickr)

WASHINGTON — Army football star Andre Carter II once again is hoping to hear his name called during the NFL Draft in 2023.

The Black Knights’ linebacker was ready to take part in the draft when that opportunity was temporarily put on hold last week after Congress passed the $858 billion defense policy bill that included a provision that barred athletes at service academies from playing professional sports until after they have completed their military service.

Carter’s family and Army head football coach Jeff Monken told ESPN last week that they felt the abrupt change, which was tucked into the 2023 National Defense Authorization Act, was unfair. Carter said he considered transferring to another school after last season, but decided to stay at the U.S. Military Academy at West Point, N.Y., because of a 2019 rule that allowed athletes to defer their service until after their pro career.

The NDAA has already been passed by Congress and sent to President Joe Biden to sign into law. But on Tuesday — after Carter’s plight made headlines nationwide — congressional lawmakers scrambled to come up with a legacy exception to let athletes such as Carter defer their military service.

The exception is part of the $1.7 trillion omnibus spending bill, which would fund the federal government through September 2023. It still needs to be passed by both chambers of Congress and signed into law by Biden.

Under the new provision, athletes who graduate after 2025 must complete two years of immediate military service before they can turn pro in any sport.

Carter, a senior Army linebacker who was second in the nation in sacks in the 2021 season, is projected by some pundits to be a first-round selection at the 2023 NFL Draft, which is scheduled for April 27-29 at Union Station in Kansas City. If that happens, Carter would be the first Army football player to be taken in the first round since lineman Tex Coulter in 1947.

During the past 50 years, only two Army players have been drafted — quarterback Ronnie McAda in 1997 and defensive back Caleb Campbell in 2008. Both were chosen in the seventh and final round. McAda was the last player chosen in 1997.

“We are supportive of this [new] provision,” NFL spokesman Brian McCarthy said Tuesday.

Rep. Mike Gallagher, R-Wis., created the amendment to do away with the deferment rule, arguing the military academies exist to develop effective troops, not professional athletes.

“When a midshipman or a cadet opts to put off their service obligation to pursue a career as a professional athlete, in effect it means they removed an opportunity from an individual who’s committed to carrying out their service obligation immediately following graduation,” he said during discussion of the issue at a House hearing in June. “So that means there are thousands of patriotic Americans who do not have the opportunity to attend a military service academy.”

Gallagher said Tuesday that he supports the legacy exception and noted he worked with other lawmakers to get it into the omnibus bill.

“I’m glad the updated text grandfathers existing athletes as we phase in a new system that prioritizes service,” he said. “Moving forward, there is much more work to be done to ensure our military service academies are laser-focused on their core, taxpayer-supported mission: training the next generation of warfighters.”

Navy star cornerback Cameron Kinley was up against a similar scenario last year. After graduating from the U.S. Naval Academy, he signed with the Tampa Bay Buccaneers as an undrafted free agent — only to find out later that acting Navy Secretary Thomas Harker wouldn’t let him delay his military service.

Defense Secretary Lloyd Austin ultimately granted Kinley a waiver that let him play in the NFL before finishing his naval service.

The omnibus spending bill is expected to be passed by Congress and sent to Biden’s desk sometime this week to avoid a partial government shutdown.