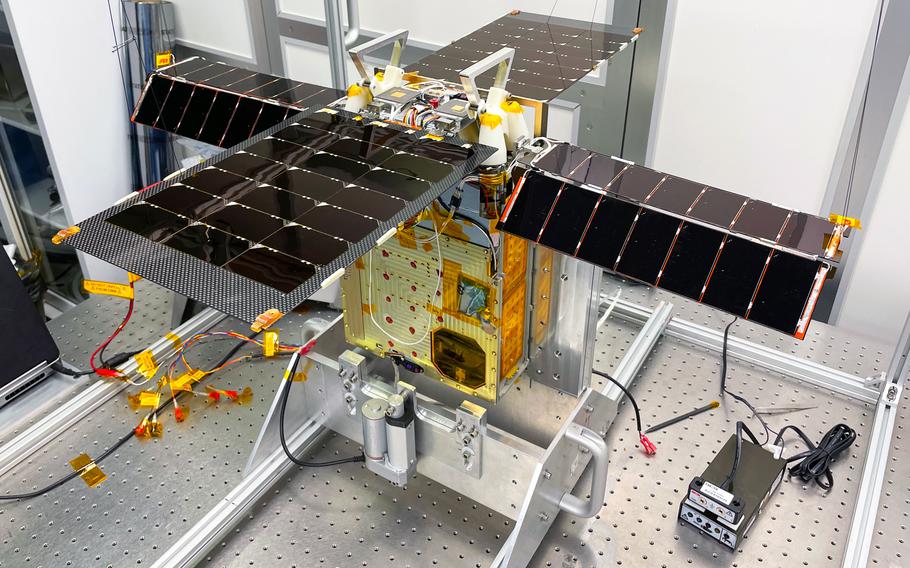 ORLANDO, Fla. (Tribune News Service) — SpaceX is back at the launch pad for another shot to send a couple of moonbound customers into space from Cape Canaveral Space Force Station.

A Falcon 9 is carrying private Japanese company ispace’s HAKUTO-R Mission 1 lunar lander, the first of a planned series of landers that if successful will make it the first commercial soft landing ever on the moon. Also on board is NASA Jet Propulsion Laboratory’s briefcase-sized Lunar Flashlight that plans to map ice in the permanently shadowed spaces near the moon’s south pole.

Liftoff is targeted for early Sunday at 2:38 a.m. from Canaveral’s Space Launch Complex 40 with a backup window available Monday at 2:31 a.m.

The booster for the mission flying for the fifth time will attempt a landing back at CCSFS’s Landing Zone 1, so a sonic boom in the predawn hours could shake windows on the Space Coast.

SpaceX delayed the initial launch attempt last week because of issues with the rocket, but it won’t affect the arrival time for the land to the moon, which is taking the long way around using the gravity of Earth and the sun for an assist before a planned touchdown five months after launch in April 2023, an effort to trade off costly fuel for payload space.

The HAKUTO-R series lander is small, less than 8 feet tall, and will weigh around 750 pounds when it lands, including space for about 66 pounds of customer cargo.

Among its customers hitching a ride is a small rover for the United Arab Emirates and a two-wheeled robot for the Japan Aerospace Exploration Agency. Upon landing, assuming other more direct flights don’t make it to the moon first, it would become the first commercial company and the first Japanese spacecraft to land on the moon. The UAE would also be making its first visit with the rover named Rashid that features high-resolution and thermal cameras as well as a probe to study why moondust is sticky.

The venture by ispace was born out of a previous iteration of the company that was one of five finalists for the $20 million Google Lunar X Prize competition, which ended up not being awarded since no company managed the successful privately funded landing on the lunar surface by the 2018 deadline.

One of those competitors, though, followed through with its attempt and came close in 2019. That’s when the Israeli nonprofit company SpaceIL attempted to land its Beresheet probe on the moon, but it ended up crashing when its main engine failed.

The HAKUTO-R Mission 1 lander looks to avoid a similar fate, and ispace has two more lunar landing missions already in the works.

“We have achieved so much in the six short years since we first began conceptualizing this project in 2016,” said company CEO Takeshi Hakamada in a press release.

To date, only the U.S., Russia and China have made successful soft landings while Japan, India and the European Space Agency have crash-landed probes on the moon.

The uncrewed Artemis mission looks to return to Earth just hours after the launch after its 25 1/12-day orbital mission. A crewed orbital Artemis II flight is planned no earlier than May 2024 and a potential crewed return to the moon’s surface on Artemis III no earlier than 2025.

Central to the Artemis program is NASA’s hunt for lunar ice on the south pole, which is where Artemis III looks to land. Lunar ice could potentially be converted into both oxygen for breathing and hydrogen for rocket fuel, which could support both a sustained lunar presence and exploration beyond to Mars and elsewhere.

Ahead of that mission, NASA’s Lunar Flashlight looks to use near-infrared lasers and an onboard spectrometer for a better look at the potential landing sites near the shadowed craters and other areas of the moon that could have water ice deposits.

Artemis-related missions are also in the future for ispace, which is working with U.S.-based company Draper for its future landing missions as part of a contract through NASA’s Commercial Lunar Payload Services program. It also has contracts with NASA to collect lunar regolith as part of other HAKUTO-R missions.

The company’s mission statement is to build out a lunar colony with 1,000 residents by 2040 called Moon Valley, its effort to “develop the space infrastructure needed to enrich our daily lives on Earth, as well as expand our living sphere into space.”