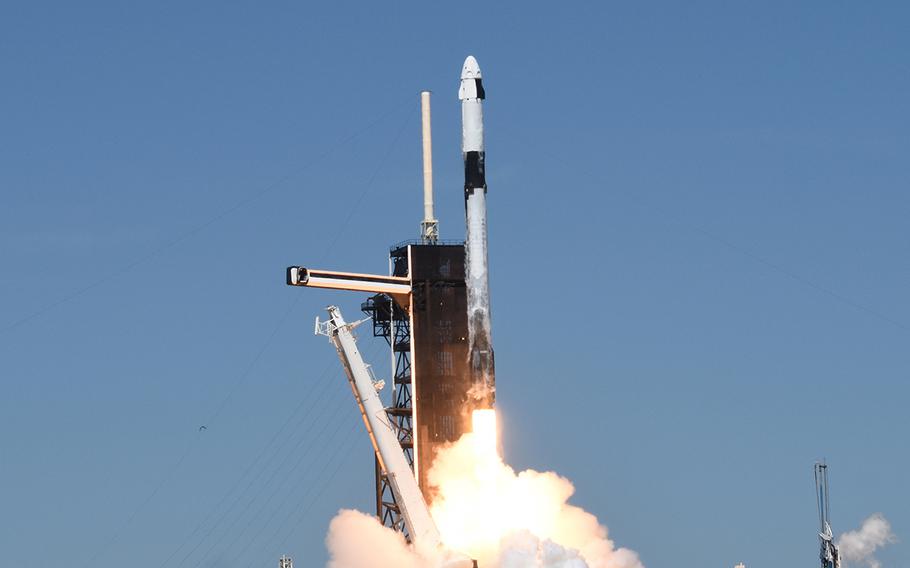 The CRS-26 mission lifted off from Launch Pad 39-A on a resupply run to the International Space Station at 2:20 p.m.

A brand-new cargo Dragon spacecraft is carting up 7,700 pounds of food, scientific investigation and supplies to the station, including a pair of rollout solar arrays to help with power supply.

"Everyone is anxious to see the science kick off as soon as docking occurs," said Jeff Arend with NASA's systems engineering and integration office for the ISS.

That includes a study that will let the ISS crew grow dwarf tomatoes as part of NASA's plans to support long-term human space travel needs. A related investigation called BioNutrients-2 looks to produce on-demand nutrients by using combination of yogurt, a yeast-based beverage, and the fermented milk drink kefir.

Several student-led experiments are making the flight as well, including three payloads supported by central Florida nonprofit SpaceKids Global and the Girl Scouts of Citrus Council. One of those will investigate how brine shrimp, aka sea monkeys, behave in microgravity.

The first-stage booster, which also flew for the first time, was able to land on SpaceX's droneship, Just Read the Instructions, in the Atlantic Ocean. It marks the 153rd time SpaceX has been able to recover a booster among both Falcon 9 and Falcon Heavy launches.

The launch keeps the Space Coast on its record pace, averaging more than one liftoff a week this year from either KSC or Cape Canaveral Space Force Station, and hitting 52 in just 47 weeks with as many as half a dozen more launches that could come before Dec. 31. Last year, the Space Coast saw 31 launches.

SpaceX has managed the king's share of those with its workhorse Falcon 9 rocket. Most send up the company's Starlink internet satellites but also provide the only human flights from the U.S. with its Crew Dragon missions, of which the company flew three in 2022 with the Crew-4, Crew-5 and private Axiom-1 missions. This is the second cargo Dragon flight of the year, making it five Dragon spacecraft launches for the year among both crew and cargo.

This latest is set to autonomously dock with the ISS on Sunday at 7:30 a.m. alongside Crew Dragon Endurance that flew Crew-5 to the station in October. This cargo Dragon will stay docked to the station for about 45 days before returning with research and cargo for a splashdown off the coast of Florida.

With this launch, SpaceX has flown 42 Falcon 9s in 2022 as well as one of its powerful Falcon Heavy rockets that made only its fourth launch ever on Nov. 1. United Launch Alliance added six launches of its Atlas V rocket while Astra Space managed two launches of its Rocket 3.3.

Launch No. 50 for the year, though, was the headliner on Nov. 16 as NASA managed to get its Space Launch System rocket aloft to carry the Orion spacecraft to space for the Artemis I mission to the moon. Orion on Saturday was headed for its farthest distance from Earth — more than 268,000 miles away — on its distant retrograde lunar orbit as part of the multiweek mission that won't see it return to Earth until Dec. 11.

The coming year is expected to see the pace continue with more Falcon 9 launches and at least two more Falcon Heavy launches.

Also in the coming year, new rocket company Relativity Space is expected to fly with its Terran-1 rocket already testing at CCSFS while Blue Origin continues efforts to get its massive New Glenn rocket ready for its first launch. Meanwhile, ULA plans to debut its new Vulcan Centaur rocket while continuing to fly Atlas V as well as a Delta IV Heavy from the Space Coast.

"We're building and investing, not just us alone, but the Space Force and NASA are, and commercial contractors are investing in infrastructure that should be able to support 100 launches a year," said Frank DiBello, president and CEO of Space Florida, the state's aerospace economic development agency. "That was our plan. I think we want the capability to be able to do two, two-plus a week."